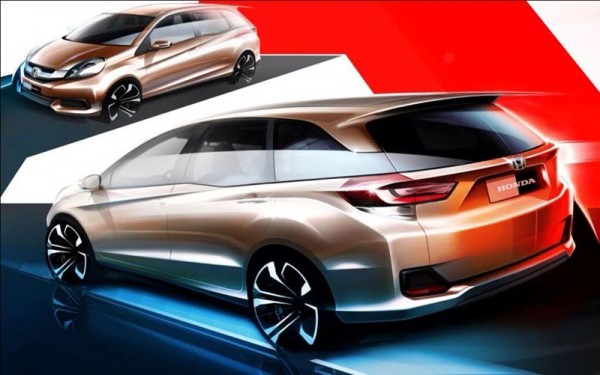 Enough has already been discussed about the upcoming Honda Brio MPV. While we have so far seen at least a dozen speculative renderings of the Brio based MPV, P.T Honda Prospect Motor today released the official sketch of the much publicized Brio body-variant.

Honda has also told the media that the Brio MPV’s exterior styling would appeal to almost every Asian car market that will receive this car. The styling bit of the Brio-MPV’s development has been taken care of by Honda R&D Asia Pacific team in Thailand and P.T Honda R&D Indonesia.

The Honda Brio MPV would be first launched in Indonesia, which has always been a huge market for MPVs. The Brio MPV will be a Maruti Ertiga adversary and will be a seven seater.

The car will be powered by a 1.5-liter petrol engine that will be high on fuel economy. For markets like that of India, the MPV would surely get the 1.5 litre iDTEC Earth Dreams diesel engine that powers the Amaze.

Speaking about the upcoming Brio MPV, Tomoki Uchida, President Director of P.T. Honda Prospect Motor said,” The new Honda MPV has been developed especially for the needs of customers and road characteristics in Indonesia. This model will also be locally produced in Indonesia as the first product of its new Second Plant in Karawang, scheduled to begin operation in early 2014. This makes the new Honda MPV a very special product for Honda in Indonesia.”

The Honda Brio MPV would make its public debut at the Indonesian International Motor Show on September 19. The India launch of the Honda Brio MPV is expected to happen sometime in 2014 and we won’t be too surprised to see Honda showcasing the new body variant of the Brio at the 2014 Indian Auto Expo.