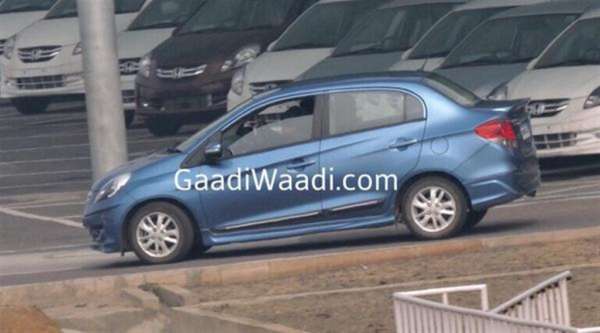 In an effort to appeal car buyers with a penchant for visual go-faster bits on their daily drives, Honda could launch an RS variant of their compact sedan, the Amaze. Although Honda had recently launched a new variant of the Amaze with a better multimedia system and power mirrors, this new RS variant could further strengthen the car’s appeal in the competitive compact sedan segment.

If the vehicle spotted at the company’s stockyard makes it to the market, the Honda Amaze RS should get additional skirting on the front and rear bumpers, further extending to the sides. A spoiler on the boot, perhaps a larger chrome licked exhaust tip and side mouldings, which should help differentiate the car in comparison to its regular variants. The RS in all probability should be mechanically similar to the regular variants, however, expect Honda to charge a premium for these additional visual bits.