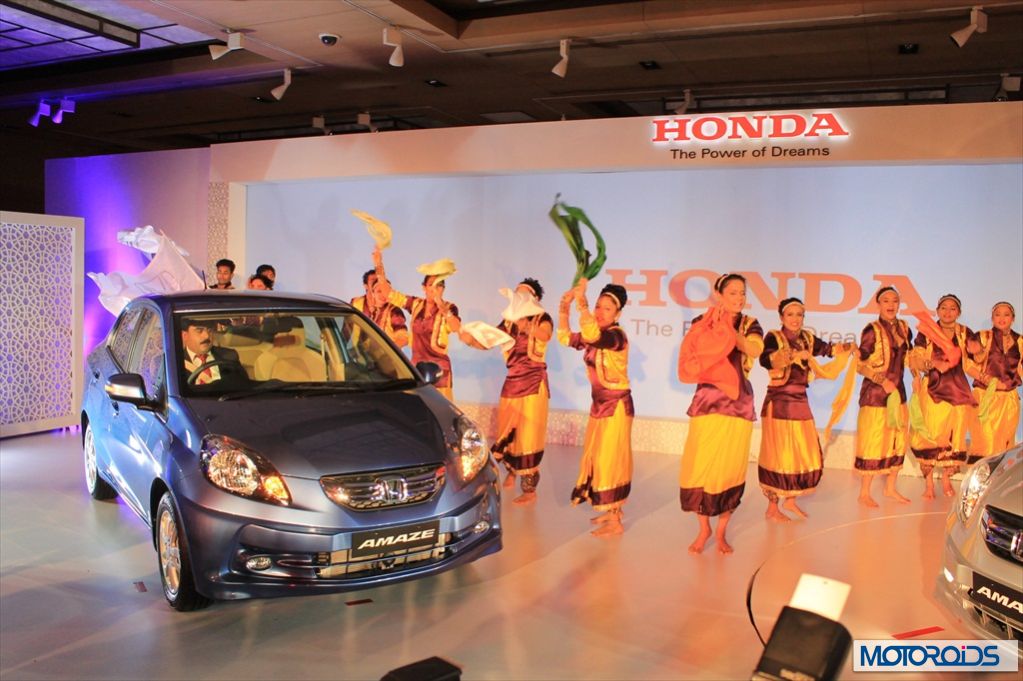 Honda Cars India has now launched the Amaze sedan at Mumbai. The new car will be launched all over India in a region-wise manner.

Honda Amaze has been launched in Mumbai with a starting price of INR 5.35 lakhs (ex-showroom Navi Mumbai)

The new Amaze will compete with the high selling Maruti Suzuki Swift Dzire, the Mahindra Verito and the Chevrolet Sail sedan in Indian market.

The Amaze petrol and diesel variants with manual gearbox come with as many as four trim levels- E, S, EX, S, VX. The petrol engine with automatic gearbox is being offered in two trim levels- S AT and VX AT.

The petrol variants of the car are powered by a 1.2 litre iVTEC 4 cylinder petrol engine. This is the same engine that also powers the Brio hatchback and is good for a max power output of 90PS. This makes the petrol variants of the Amaze as powerful as any other petrol car in its segment. The petrol engine comes mated to a 5 speed manual transmission and gets an option of a 5 speed automatic gearbox.

Powering the diesel variants of the new Amaze is a new 1.5 litre iDTEC diesel engine that has been developed alongside the much hyped 1.6 litre iDTEC diesel engine that can be found powering the diesel variants of the UK spec Civic and CRV. Very much like the 1.6 litre engine, the new 1.5 litre diesel motor benefits from Honda’s trademark EarthDreams technology. This new diesel engine has a maximum power output of 100PS and boasts of a peak torque figure of 200Nm. The engine comes mated to a 5 speed manual gearbox as standard. (No automatic transmission option is being offered with the diesel engine variant.)The new diesel engine has a claimed fuel efficiency of 25.8 kmpl and this makes the Amaze the most fuel efficient car on sale in India.

The Honda Amaze has been launched with 6 colour options- Blue, Titanium, Silver, Red, Black and White.