The Hesketh 24 limited edition cafe-racer motorcycle has finally been unveiled, says VisorDown. And herein lies a peril of auto-journalism : No matter how much you detest a vehicle, you have to write about it!! 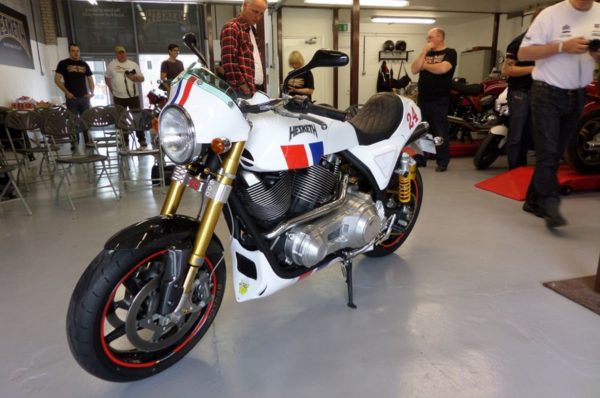 Beauty lies in the eyes of the beholder. Call the Hesketh 24 whatever you may want : a classic, a retro beauty, a throwback to the olden times, but I would call it UGLY. An abomination at that. And as you delve deeper into the bikes details, you start wondering why was it ever made.

Let me provide you a peek into the naming of the bike. Hesketh is a Surrey-based motorcyclemaker which went out of business some decades ago. Hesketh also maintained a Formula 1 Constructor Team for some time in the 1970s and 1980s, before eventually bowing out of action. Somehow, investors saw a potential in this defunct company and managed to pump in about £900,000 since 2010 so that a bike named Hesketh 24 could be designed. Only 24 units of the Hesketh 24 will ever be produced and sold; making it an extremely extremely limited edition bike. 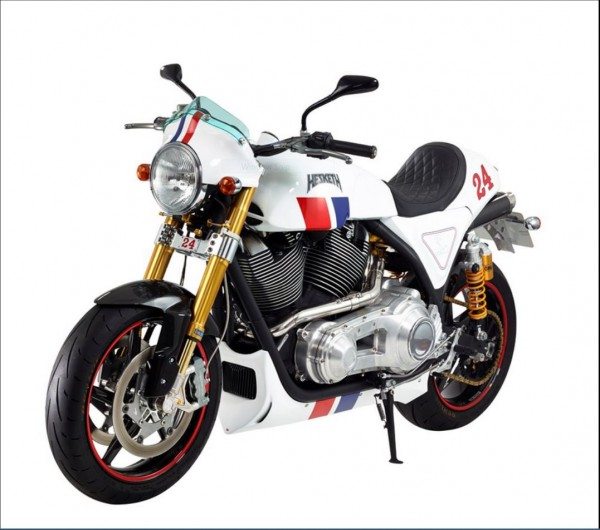 Each Hesketh 24 will carry a price tag of £35,000, and will come with a 2-year unlimited mileage warranty.

The Hesketh 24 is powered by a 56-degree air-cooled S&S X-wedge V-Twin motor tweaked by British performance tuners HPE, who somehow managed to churn out 125 hp of peak power and 190 Nm of torque from that portly, unsightly-looking 1,950 cc lump of iron beneath the fuel tank. The engine has two exhaust cams and one inlet cam, and it redlines at 6,500 rpm. The massive engine is paired to a five-speed Bakers gearbox. The Hesketh has got Ohlins suspension at both the front and the rear. Braking duties at the front are taken care of by a two-disc Beringer setup, and the bike rides on ultra-light carbon fibre wheels from BST. The bike’s skeleton has been shaped by Racing Innovations, and it uses a heavy clutch from Baker called the “KingKong”. Note that this is the clutch used in some Cadillacs. 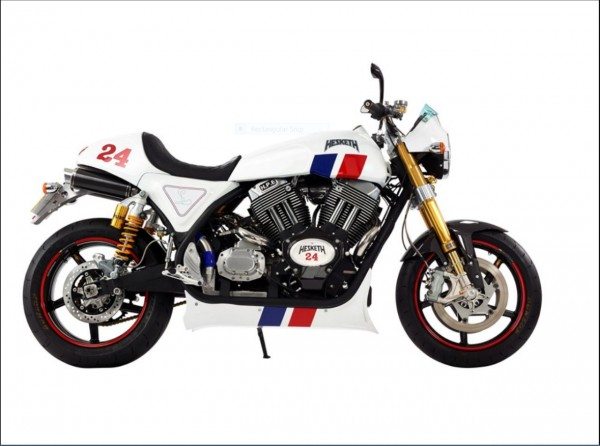 What does Hesketh do?? It builds the exhaust pipe and the swingarm in its own facility.

Now, I may not be a  motorcycle manufacturer, but this looks pretty weird to me. Collect various parts from some big-wig manufacturers, slap them on together and voila! You have a bike that you will use to ride out of bankruptcy.

Company officials state that there are currently 11 customers interested in buying the Hesketh 24 bike. Three of them have already paid a deposit. Hesketh has got some pretty bright future plans; one of them is a two-seater version of the Hesketh 24 once the famed 24 bikes are sold out. That, of course, if they find a way to fill the gaping £60,000 hole in their pocket as I earlier pointed out.

Which brings me to my original question : Why was the Hesketh 24 ever made? Someone said it right :  The rich will pay anything to buy something really exclusive.