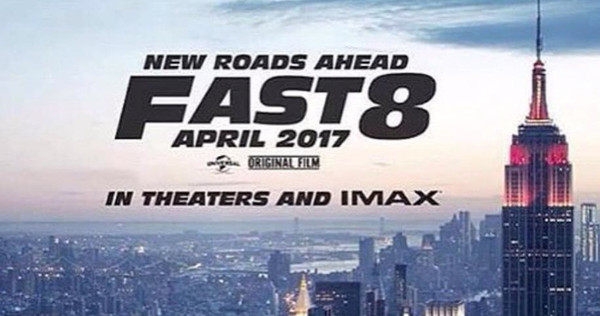 Alright then, here it is; the first poster for the eighth instalment of the Fast & Furious franchise, with the official title Fast 8. The poster for the next chain in the link, the previous one of which created mayhem at the box office was revealed through the Instagram account of one Vin Diesel. Featuring the Empire Estate Building, one of the definitive distinguishing landmarks of the Big Apple, Fast 8 will be the second movie in the series after Tokyo Drift to not star Paul Walker.

There is no word on the plot, but we know quite a bit about the top billed cast and crew. Leading the men known for their skill behind the wheel will be Vin Diesel, along with the very flamboyant Jason Statham and Dwayne ‘the Rock’ Johnson who was trolled on the web for his ‘Daddy’s got work to do’ line in the previous instalment.    Michelle Rodriguez will play the female lead as Lettie ‘Ortiz’ Toretto, while Ludacris will be playing the role of Tej Parker.

Meant to be shot partly in New York, the action flick will see Straight Outta Compton director F. Gary Gray donning the director’s cap. A good part of the movie is also expected to be shot in Cuba. Fast 8 is expected to start a trilogy which will see the franchise conclude in its 10th instalment.

While the Furious 7 wasn’t a very technically accomplished movie, it did highlight the tremendous following the franchise has with its colossal box office collections. Fast 8 will has big shoes to fill, we just hope that the new man at the helm, F. Gary Gray manages to carry out his job splendidly. The movie is expected to be released in March 2017