Home News Have you seen Dabangg Salman in this Suzuki Hayate TVC yet? 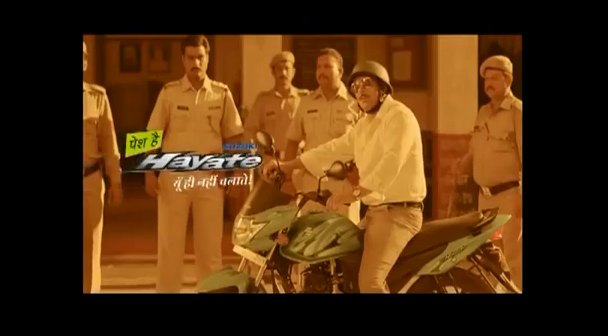 So which Bollywood actor has the biggest reach among the Indian masses? I would be surprised if you named anyone other than Salman Khan. The superstar, who recently picked up stake in Yatra.com in lieu of endorsing the brand, has most recently been seen on TV promoting the Suzuki Hayate commuter bike. Salman dons his Dabangg character, chasing an escaped convict through a busy bazaar.

The ad says little about the qualities of the bike, banking on the star’s screen presence instead. We find the storyline rather naïve and frivolous. It may not appeal to the more sophisticated audience, but it will most definitely work for the rural / lower income segment audience who would love to watch their favourite star in one of his most popular avatars. The idea here seems to acquaint the audience with the brand name, and we’d reckon the creative agency has succeeded in its endeavour.

‘Hayate – yoon hee nahin chalate’ – the punchline may look funny to the most of us, but it’s catchy and has a strong brand recall value to it.   It should make a good number of prospective customers have visions of Dabangg Sallu sifting his way through the narrow streets of a market, even if it fails to guide them to the showroom floor.  Not a bad achievement we’d like to think.

Do let us know what you think of it?