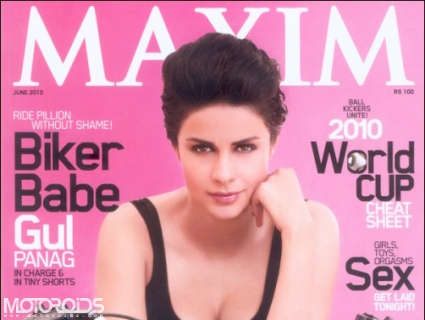 This is not the first time that Gul Panag is on the cover of Maxim. However, the difference is, the September 2008 issue featured Gul Panag, the actress, while the June 2010 issue features Gul Panag the biker! And since we all love biker babes for their ability to ride, think out of the box and value the sense of motorcycling freedom, we decided to spread the news about Gul Panag’s Maxim feature. Speaking of our love for biker babes, Gul Panag wonders why we adore them so much, for the magazine quotes her saying, “If a woman on a bike is enough to drive any guy insane, I just don’t get the point. It’s not like I ride a bike in a bikini! I am wearing a jacket and a helmet, so there isn’t much at display here.” If you have an a worthy answer for Gul, then post it in the comments box below: