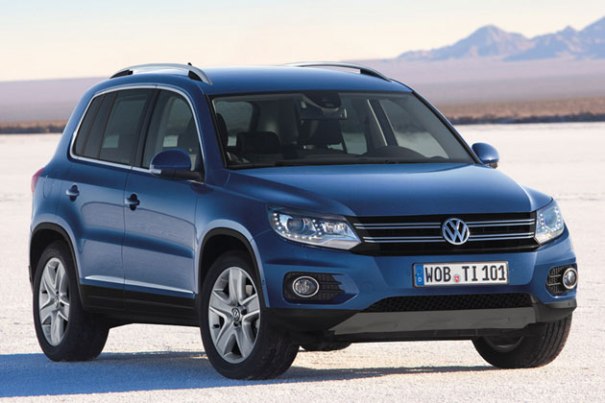 This is the 2012 version of VW’s CR-V competitor, the Tiguan. The front end has been overhauled so as to meet the new VW design language, which is getting increasing boring, with almost every VW vehicle looking similar to the other. Same applies to the new Tiguan as well. The grille has been redesigned to visually match that of the new Jetta, and Passat, and Polo, and Scirocco and every other VW car that you can imagine.

Some relief comes in the form of Bi-xenon lamps and LED lights around them. VW has only released the front pictures of the car, which prevents us from commenting about the rear’s design. However, the company’s press release says that the tail lamps have been refreshed to present a “double L” pattern. The top of the line SEL trim will also get new 19-inch Savannah wheels designed by R GmbH.

Some changes have been made to the interior as well. As an upgrade, all 2012 VW Tiguan models will get a high-quality eight-speaker music system with Bluetooth and Aux-in features. The ORVMs will now be heated.
The 2.0-liter TSI engine on the car will be retained, and will deliver about 18% percent better fuel efficiency.