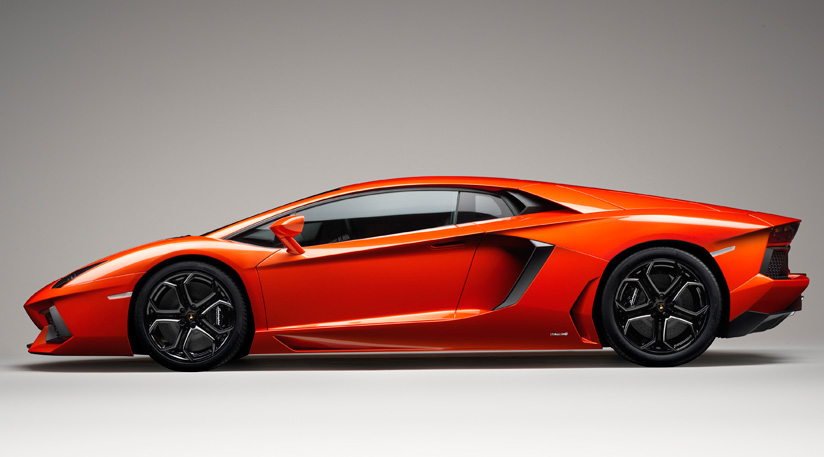 Lamborghinin has revealed the official pictures and details of the Aventador LP700-4. The car looks like a slightly sobered down version of the limited production, and incredibly sexy Reventon. Now that cannot be a bad thing, but we would have liked something new. Aventador is the name of a Bull (like you didn’t know) that earned the Trofeo de la Peña La Madroñera for its courage in Spain’s Saragossa Arena in 1993. 700 in LP 700-4 stands for the car’s peak power output of 700PS, and 4 stands for 4WD. Transmission duties are taken care of by a new seven speed automated manual gearbox which is faster and lighter than a dual-clutch system. Lamborghini calls this transmission the world ‘most emotional gearshift’

The LP700-4 boasts a flat underbody and a three-stage pop-up rear spoiler which either lies flat or rises to 4 degree or 11 degree based on the car’s speed. There are Y-shaped led light surrounding the headlamp at the front, and working as tail-lamps at the rear. The car is longer, narrower and 1mm taller than the Murcielago.

Drive select mode can be preconfigured into Strada (road), Sport and Corsa (track) settings. The Aventador is the first production Lamborghini to feature a carbon fiber shell. The Aventador LP700-4 weighs just 1575kg, 90 kg less than the Murcielago. What this means is better handling, faster acceleration and crisper braking. Weight distribution is rear-biased 43:57. The suspension on the Aventador is all-new. The front axle also features a lift system that can raise the nose by 40mm.

Inside the cabin, the car features more space and better driving position. The Dashboard looks more like the cockpit of a fighter aircraft with all the controls positioned on the slightly tilted center console.

Inside there’s more room, an improved driving position, while a TFT-LCD screen ahead of the driver is customisable, and there’s a second screen for the sat-nav. The broad transmission tunnel dominates, and features a red cover for the obligatory starter button.

The first Aventadors will be delivered to the customer in summers of 2011, and will cost in the region of a whopping Rs 2 crore in the international market.