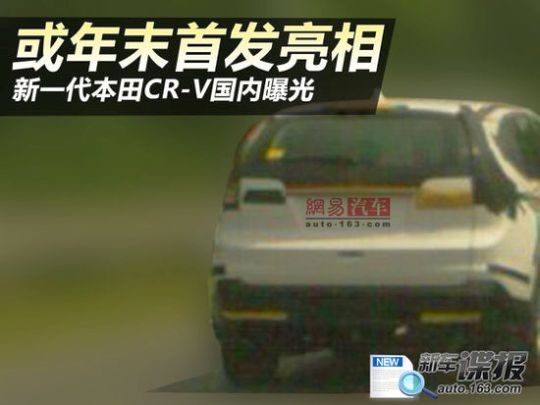 The buzz on the 2012 Honda CR-V is building up fast. A few weeks back we brought to you the first images ever of the brand new, 2012 Honda CR-V, then the Japanese carmaker officially declared that the launch of the next generation CR-V is indeed very close. And now, we have the next set of the spy pictures of the car. For the first time ever, the rear end of the 2012 version of the super hit crossover is clearly visible. The last (and only till this news broke) spy images of the CR-V shopwed the car in profile, clearly indicating a bigger size and probably a third row of seats.

In its latest iteration, the CR-V will be powered by the same 2.4 liter i-VTEC powerplant that current propels it, although the power will be improved slightly and the emissions will be less. For the UK market, there will also be a diesel option in the form of the 2.2 liter i-DTEC engine producing 165 horses. The current CR-V too is available with the engine in some European countries. It’s a shame though that Honda has not considered the oil burner for India, and shot itself in the foot. Had there been a diesel option for the CR-V thousands of SUV buyers who strayed onto the Captivas and the Santa Fes of the world wouldn’t have looked beyond the H badge.

While the earlier spy pictures of the new 2012 CR-V suggested a Volvo XC60-like design for the rear end, after seeing the fresh pictures, we must say that the similarities end in profile. When looked at straight from behind, the new CR-V seems to have changed a lot over its current version. The spy pictures reveal a rather small rear windscreen, elongated, vertically stacked tail-lamps and a tail-gate which extends all the way down into the rear bumper to allow for a really low loading lip. The tail gate seems to have been designed to merge with the lines of the rear bumper, to make the lower part of the hatch look like a part of it.

Honda claims that “With a new design—both inside and out, new features and new possibilities, the 2012 CR-V will set a new standard for the class. As a top-selling crossover for over five years, expectations for the 2012 CR-V are high and we’re confident they will not only be met, but exceeded.”

The CR-V would retain its 2.4-liter petrol i-VTEC engine with slightly more power and better fuel efficiency. Some reports also suggest that the CR-V may also get a smaller, more fuel efficient engine. There will be a diesel burning variant as well, powered by the current 2.2-liter i-DTEC power with more than 160 horses and 370Nm of torque. Reports of a hybrid power plant are also floating around.

Here’s the earlier spy picture of the new CR-V we showed you a few weeks back. Click on this link to read our earlier story on the car.