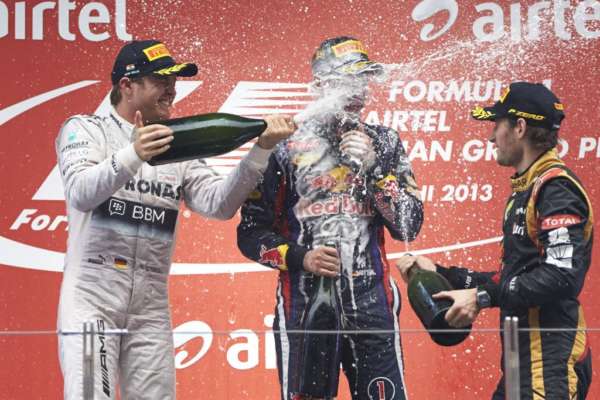 A strong drive from Nico Rosberg saw him finish on the podium at the Indian Grand Prix with Lewis Hamilton finishing in sixth place.

Talking about his performance, Nico Rosberg said,”A great job from Sebastian today and his fourth title is well deserved. For our team, it was a very important race today. We scored a lot of points and climbed back up to second place in the Constructors’ Championship. I’m quite confident that we can keep that position until the end of the season as the team is doing a great job and our car looks good but it will be a fight. I had good pace today and we really nailed the set-up here. The team did a fantastic job on the strategy and thanks to the boys for that. The only thing which didn’t work out perfectly was when I dropped behind Felipe at the start as it was not easy to overtake him on the track, but then we managed to clear him in the pits. Our target was to be the best of rest this weekend and it worked out perfectly.”

Commenting on the race, Lewis Hamilton, said,”Massive congratulations to Seb on becoming four-time World Champion today. That’s an awesome achievement and he’s put in some incredible performances this season. I really hope we get to take the fight to him next year! Looking at my race today, it’s great that we got some good points, particularly with Nico’s podium, and that the team are back to second place. The car has been pretty good this weekend but the race was frustrating for me. I tried so hard to get past Felipe but it just wasn’t possible and unfortunately I destroyed my tyres in doing so. Finishing in sixth place is never satisfying but we’ve got three more races and we’ll keep pushing. I’m confident that we can get some more good results to keep the team in second place and we’ll keep fighting to achieve just that.”

Speaking about his team’s performance, Ross Brawn, said,”First of all, congratulations to Sebastian Vettel on winning his fourth World Championship. To win multiple championships as he has done, you must be not just a driver but also a fantastic team member, and he clearly has all the attributes that requires. It’s now up to us to stop him. From the team’s perspective, we scored a very solid team result this afternoon. Nico enjoyed a very, very good afternoon: the strategy worked out perfectly for him and he got all the right breaks, which allowed him to show what the car was capable of delivering. For Lewis, losing position to Massa early in the race proved critical. That meant we were unable to build a gap in the opening stint because we couldn’t run at our natural pace, so as others behind us pitted, we had to anticipate our first stop in spite of having plenty of life left in the tyres. After that point, Lewis didn’t have the straightline speed to pass Felipe and make the most of the core performance of the car. That naturally left him frustrated but shouldn’t overshadow the good work both drivers and engineering teams did this weekend. We gathered a good haul of points today and need to continue to do so in the remaining races.”

Toto Wolff  said,”Congratulations to Sebastian Vettel on his fourth consecutive World Championship. He has done a perfect job since the summer break and this is a richly deserved title. For our Mercedes team, Nico delivered a really good drive today. He showed pace when it mattered and managed the race when it counted. It was great to see him back on the podium. Lewis was compromised on the first lap and we didn’t have the top speed to pass Massa on track today. Clearly, when you are following a car so closely for so many laps, that doesn’t help tyre degradation and that was why he ran out of tyres in the final laps. Taking all of that into account, P6 is still a solid result and contributed more valuable points. We have had a good afternoon compared to our direct rivals today but there is still a long way to go until we can say mission accomplished. There is no complacency and our target will be to deliver another three strong weekends this season.”