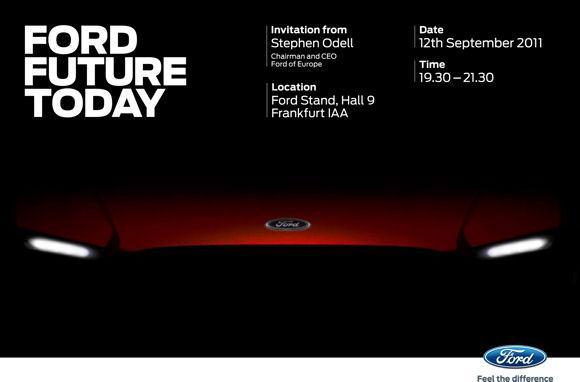 Ford has officially stated that the company will exhibit as many as four global products at the upcoming Frankfurt Motor Show. Out of these, one would be an entirely new design concept, and another would be the next Focus performance car. The company has also released a teaser image of one of the products to be shown at the expo.

“Ford plans to make a strong statement at the Frankfurt Motor Show, with several very exciting global product reveals and our significantly expanded show stand. We’re excited to be showing customers our best-ever vehicle line-up and a special glimpse of the future”, said Stephen Odell, chairman and CEO, Ford of Europe.

The company is not revealing specifically which cars it will showcase. However, the ‘Focus performance car’ stated by the company in its statement is almost certain to be the new Focust ST which will be powered by a 250bhp / 360 Nm 2.0-liter Ecoboost engine.

The second product would be the one whose teaser image has been shown by the company. The third product is expected to be the Fiest facelift which has been due for some time now.

And the fourth product? Well, we don’t have a clue about it. But we’ll all know once the Frankfurt show goes underway on 13th September 2011