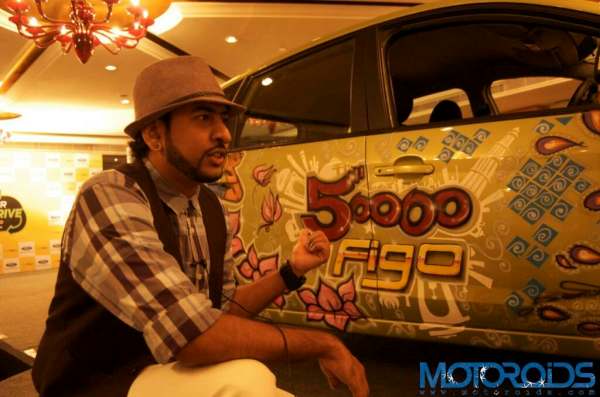 To celebrate the production of the 50,000th Ford Figo, Ford India have launched a Figo road trip campaign called Ford Figo Discover Smart Drive in which a customised Figo will be driven from Chandigarh to Chennai. A special Figo has been prepared for the job with a cool paint job and accessories designed by Harun Robert (better known as Rob), a popular children’s television host renowned for his artistic, music and dance skills.
Four young couples will drive this customized “Discover Smart” Figo during the 25-day, 2500 kilometer drive which starts from Chandigarh and passes through Delhi, Agra, Jaipur, Gwalior, Indore, Nagpur, Hyderabad, and Bangalore and many smaller cities and towns before ending in Chennai on October 30th.

The four couples have been selected from a contest inviting young couples to participate in the cross country drive. To qualify, couples had to send in their nominations by sharing the most memorable activity that they have done on a vacation and unique destinations they have visited.

There was a big response to the contest with close to 450 entries and after a rigorous judging process involving independent automotive industry bloggers and Ford senior executives, the four couples were selected
The first leg of the tour, Chandigarh –Delhi- Agra-Jaipur, will be driven by Dinesh Singh Slathia & Rekha Slathia from New Delhi. The second Jaipur-Gwalior-Indore leg will be driven by Noida residents, Anshul Sushil and Akriti Bhargava. Taking the wheel for the third leg from Indore to Nagpur to Hyderabad is Kalkata couple, Ashish Garg and Neha Garg. The final Hyderabad-Bangaluru-Chennai leg will be driven by Nischal Ram and Niharika Nischal Ram from Bangaluru.

During the road trip, the respective couples will have the chance to explore the scenic wonders and local attractions of the various cities and regions. They will also pop into a number of Ford dealerships along the way to join related parties and celebrations. They’ll also share their journey stories, photos, videos and experiences online on their Facebook, Twitter, Orkut profiles and blogs. They will also post their experiences for the Ford Figo fans on the Ford Figo communities and a Driving Ford blog https://www.drivingford.in

Ford Figo fans can follow the couples on the ford Figo communities and help the couples out by posting valuable suggestions, advise and tips along the way. There are interesting prizes to be won on the Ford Figo communities.
“Besides celebrating the 50,000 milestone, the objective of the pan-India drive and associated events is to thank Figo customers nationwide for their support in making Figo the most popular car in its segment,” said Ford India President and Managing Director, Michael Boneham.