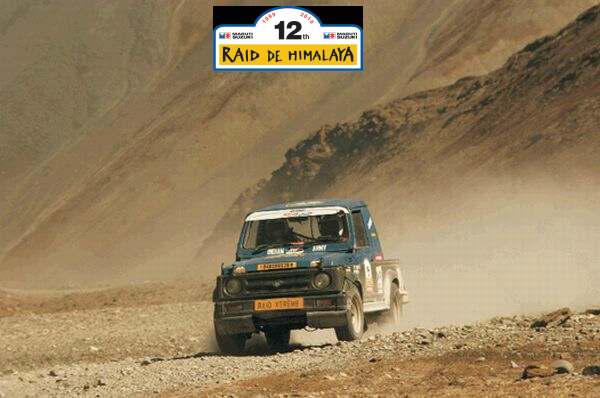 The 12th edition of Raid-de-Himalaya, the world’s highest and one of the most difficult motorsport events is going to get underway on the 16th October. This time, the Raid-de-Himalaya is designed to be more challenging, grueling and for some, enjoyable than ever.

The six-day long competition will see the participants drive and ride through some of the most challenging terrains in the world. En-route the world’s highest motorable roads, the participants will travel through 2000 km of tough terrain of which 694km will be a competitive stretch.

This time around, Raid-de-Himalay has witnessed 164 participating teams, comprising of over 275 people of which 11 are female, and there are many senior citizens as well.

Our very own Motoroid Hrishikesh Deshpande, along with some of his friends is participating in the rally, and will be sending us pictures, and updates regularly from his adventure. For those of you who want to know more about the Raid-de-Himalaya – here is the official press release.

New Delhi, Oct 05, 2010: The 12th Maruti Suzuki Raid-de-Himalaya, one of the most awaited motorsport event in the country wil take place from 10th October to 16th October. To make it more grueling and exciting this year’s event will take a more challenging route. This edition has 164 teams in the fray, with 277 participants; which is the maximum participation ever. The Raid-de-Himalaya event will span across 6 days to traverse a distance of 2,000 kms through the vigorously undulating terrains in the Western Himalayas.

This year’s Maruti Suzuki Raid-de-Himalaya will pass through the most inhospitable terrains in the Western Himalayas. The Route covers some of the highest motorable places in the world. This would include Kaza (3600 mts), Tabo (3050 mts), Komic (4275 mts) in Spiti valley and Patseo (4830 mts), Sarchu (4551 mts) in Lahul valley, and the formidable Baralacha la (4883 mts). The event will conclude on October 16, at Manali with the prize distribution.

Last year’s champion Major Amarinder Brar in his Maruti Suzuki Gypsy will try to for a repeat performance. He will face stiff challenge from Suresh Rana who is a veteran of five Maruti Suzuki Raid-de-Himalaya. Amongst the bikers, all eyes will be on Ashish Saurabh Moudghil, who has been a regular since 2006.

Participation from across the country

This year there are 11 female participants as compared to 6 in the last year’s event.  Last year’s winner of Coup De Dame Trophy Ms Chander Suta Dogra is back and shall be participating with Ms Pragya Singh who shall be assisting her as a navigator. Other female participants include Ms Suchi Thakur from Dharamshala and Ms Revati from Delhi.

Three separate versions based on skills

Adventure Trial: This version will run on the same challenging route and is open to those motorsport enthusiasts, who would like to take on the Himalayas but without the tough competition, difficulty and stress involved in the Xtreme. This section will be open only to stock cars and SUVs and only certain safety-related modifications will be allowed in the competing cars. In this year’s event 70 teams are competing in Adventure Trial category.

Bikes Xtreme: This section is open to bikes of all types and makes but there are certain regulations that the bikers will have to adhere to. Participants in this category are probably the bravest of the raiders, as they have to face the hostile weather and tough terrains without the comforts of a cabin surrounding them. The 12th Maruti Suzuki Raid-de-Himalaya, wil have 51 biker participants.

The 12th edition of the Maruti Suzuki Raid-de-Himalaya is being organized under the aegis of Himalayan Motorsport Association. This toughest motoring event in the country is being supported by the Indian Army.