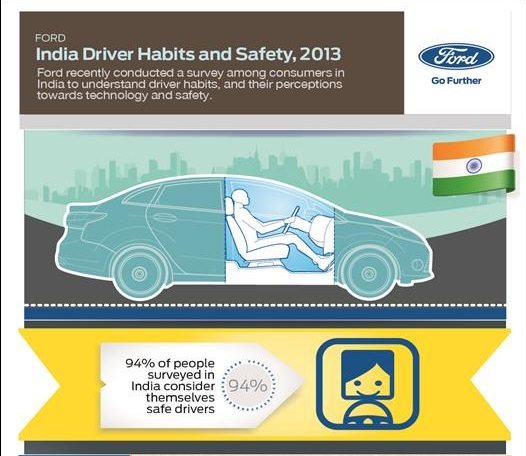 A new survey commissioned by Ford brings out some apalling findings about the driving habits being practised in India.

Quite ironically, as many as 94 percent drivers here say that they practice safe driving habits. In reality though, 70 percent of drivers in India have dangerous driving behavior, including exceeding speed limits, talking on hand-held phones, texting, applying makeup, and drinking and driving.

The survey, undertaken to better understand driver habits and perceptions toward safety and technology, shows that many drivers remain unaware of the safety impact of certain driving habits. But it also showed that most drivers are interested in automotive technologies that can be used to enhance safety.

“All around the world, drivers tend to overestimate their skills and underestimate the impact of certain unsafe driving habits – and drivers in India are no different,” said Vinay Piparsania, Executive Director, Marketing, Sales and Service, Ford India. “The data we have show that there’s a real need for a conversation with drivers about safe driving habits and safety technologies.”

Despite the overwhelming majority of drivers in India viewing themselves as safe, most engage in distracted driving behaviors such as using a hand-held phone 67 percent; 55 percent even find time to text while behind the wheel.

Even when parking, there are real risks: 63 percent of respondents admitted to having hit something while reversing their cars.

“It’s clear that there is a need for more driver safety education and higher awareness of driving safety issues in India and that why we think that programs like our own Driving Skills for Life are so important,” said Vinay Piparsania, Executive Director, Marketing, Sales and Service, Ford India. “We’re trying to guide the conversation in a productive and forward-looking way.”

More than simply showing the disconnect between drivers’ perceptions and their driving habits, the survey also reveals that drivers are open to new technologies that may help them to become more aware, better drivers.

More than 80 percent of drivers said they were interested in voice-activated technologies, such as Ford’s SYNC, that let them control vehicle functions without taking their hands off the wheel or eyes off the road.Ford is already leading the industry by innovating and making these technologies widely available and affordable for its customers.

“With 51 percent of respondents saying that it’s important for them to answer the phone while driving, it’s clear that we need to find a way to fulfill that need without compromising safetysaid Vinay Piparsania, Executive Director, Marketing, Sales and Service, Ford India. “What the survey also showed us is that drivers really value safety technologies and are willing to pay a premium for added safety.”

Those safety features range from the fairly common – 76 percent said they would pay more for passenger and rear airbags – to the more technologically cutting-edge.

As many as 80 percent of respondents said they were interested in features to keep a vehicle from drifting into a neighboring lane, such as Ford’s Lane Keeping Assist technology. And when dealing with the chore of urban parking, 88 percent said they were very interested in technologies alerting them to unseen obstacles.

“When you look past the overconfidence of many drivers, what we’re seeing is that people are really concerned about safety, and they’re interested in finding ways to become better, safer drivers. We at Ford think that a combination of education and advanced features can go further to make the roads in India safer for everyone,” said Vinay Piparsania, Executive Director, Marketing, Sales and Service, Ford India.