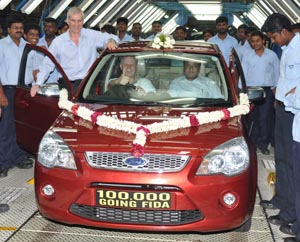 Ford has been doing quite good since the recent times in the Indian market. The Ford Figo which has been launched lately has been selling in good numbers. We also reported to you that, looking at the good sales of the Figo, Ford might just roll out another small car in India. It has been 4 years since India has got the Ford Fiesta. In these four years, the Fiesta has finally reached the level of 1,00,000th unit to be produced. The Fiesta is manufactured from Ford India’s Chennai manufacturing plant.

The 1,00,000th Fiesta was driven out by Ford India’s president and managing director Michael Boneham in the presence of executive director, Marketing, Sales and Service, Nigel Wark; Sandip Sanyal, executive director of Operations. Hundreds of Ford India employees were also present at the final assembly to relish the moment of pride.

Michael Boneham, president and managing director of Ford India said, ”After a terrific sales record in March and April, the rolling out of the 100,000th Ford Fiesta is a truly special moment for Ford India. The event marks a new milestone for us.”  ”Ford Fiesta continues to make us feel proud and is a significant product in our portfolio. The popularity of the Fiesta testifies that more and more customers have been reassured by its quality, features and performance. The sale of the 100,000th Fiesta is testimony to our strong customer appreciation for the Fiesta,” he added.

The Ford Fiesta is well known for its mind boggling fuel efficiency.