Home Ford Ford India starts with the promotions of EcoSport. Will it be launched before Diwali? 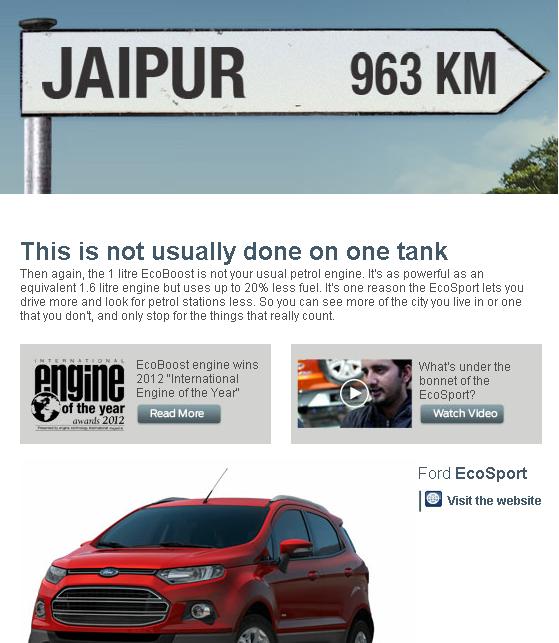 The entire nation has been eagerly waiting for the launch of much hyped Ford EcoSport. While our sources earlier told us that the new mini SUV will come to Indian market only next year, the regular sightings of the uncamouflaged test mules of this car in India put a big question mark on the various claims that the car won’t be launched this year. This is not all that makes us believe that we might get the car much earlier as Ford India has already started with the promotions of the new car and its 1L EcoBoost engine. Ford says that the new 1L EcoBoost engine which does duty in the EcoSport is as potent as a 1.6L gasoline engine but is as much as 20 percent more fuel efficient. It may be noted that Renault will launch the Duster Mini SUV in Indian market on 4th July and Ford India might have felt that a delay in launch of EcoSport might result in Renault getting well established in the segment. It may also be noted that both EcoSport and Duster have been called as an alternative for small sedans by their respective manufacturers. Going by the way news has been pouring in about the Indian launch of EcoSport, we might get the car as soon as in Diwali season this year.