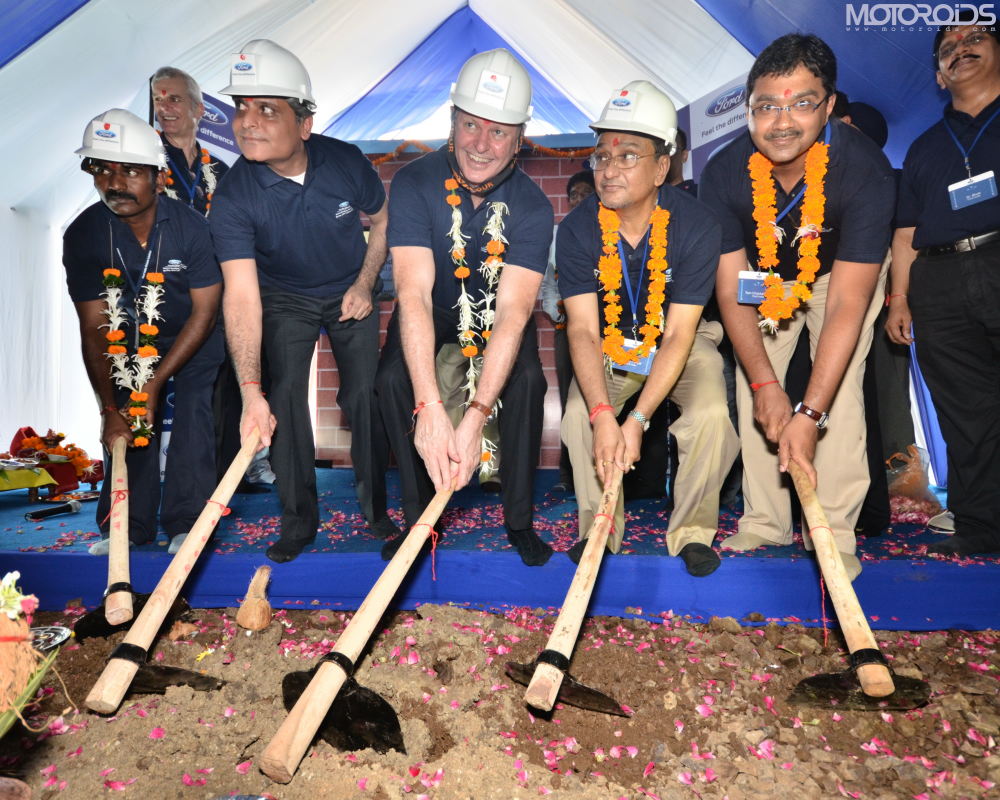 Ford India top management at the Sanand plant in Gujarat

Ford India has started the construction of its new plant in Sanand, Gujarat. The company broke ground today to start construction. Ford India is investing close to Rs 4000 crore to build new vehicle manufacturing and engine plants in Gujarat. The new plant should be able to produce 24,000 vehicles and about 2.7 lakh engine per year when it gets functional in 2014. About 5000 new jobs will be created with the new manufacturing facility.

The Sanand plant is one of the several new plants Ford is building to support its aggressive expansion plans in India and throughout the globe. Earlier this year, Ford announced an investment of USD 72 million by 2012 to expand its already operating powertrain facility in Chennai. Ford’s total investment in India to date is approximately Rs 8000 crore.

The company is planning aggressively for India, and is looking at launching eight new vehicles to India by mid-decade. The first of these, the All-New Fiesta, was launched in July. Ford India also plans to increase its sales and service network to 200 outlets by end of the year, of which more than 40 percent are located in secondary markets. In 2011, Ford has continued to grow aggressively in India by opening one service or sales outlet every week.

“This is an investment in the future of Ford globally,” said Joe Hinrichs, president, Ford Asia Pacific and Africa. “These new state-of-the-art facilities will help us reach the goal of increasing worldwide sales by nearly 50 percent by mid-decade to 8 million vehicles per year. We are aggressively expanding in markets around the world that have the most growth potential, in order to offer more of the fuel-efficient, high-quality vehicles from our global portfolio that customers in markets like India want and value.”

Michael Boneham, president and managing director, Ford India said “today is another milestone and reinforces our commitment to aggressively grow the Ford brand in India and offer a full range of exciting, fuel-efficient vehicles to Indian customers.”

Ford India requires these new plants to support its expansion plans for India. The American carmaker is looking to introduce a sub-Figo car and other volume products in coming times. In a statement the company has mentioned that 70 percent of its new models for India will be in the volumes segment. These cars should include small and big hatchbacks and a new sedan the size of the Swift Dzire.

We’re on the hunt to figure what exactly Ford India has in store for India. We’ll soon let you know the new cars which would comprise the remaining seven products for India. Stay tuned.