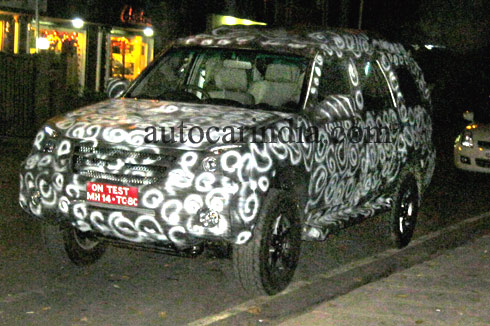 Force Motors new SUV which they are working since quite a long time has been spied again. This time the car was spotted at Boat Club in Pune. The SUV was supposed to be on sale last month itself but maybe Force Motors are leaving no stone unturned, they are seeking perfection as it would be their answer to M&M Scorpio which is undoubtedly a hot favourite amongst SUV buyers.

Under the hood lies the 2.2 lit diesel engine which is built under license from the Daimler. This means the engine quality has to be a notch up which will give Force Motors a upper hand against Tata Safari as well as M&M Scorpio.  Even though the engine has been down toned to suit Indian conditions offering maximum fuel efficiency, it will still prove to be successful.  Force Motors have also taken help from foreign consultants regarding the NVH level which the company is very serious about.

Force Motors Is happy with their prototypes and says that the SUV uses a C-in-C chassis that has been developed and designed in house by Force Motors. The size and design of the SUV does not look disappointing and the 2.2 lit engine also seem like a winner. What do you think about Force India’s attempt to enter the SUV world?