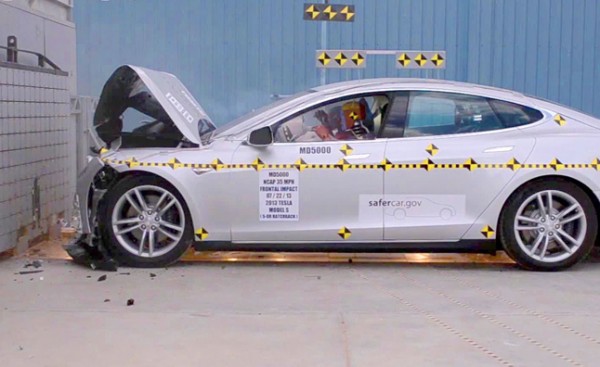 These surely are testing times for the Tesla Model S. Thanks to several fire incidents, Tesla Model S recently went through a series of investigations in Germany.  The result of these investigations? German Federal Motor Transport Authority issued statement stating that there were no manufacturing-related defects in the cars that caught fire. However, the testing times don’t end there, not really!

The National Highway Traffic Safety Administration (NHTSA) recently decided to subject the 2014 Tesla Model S to its intense crash testing regime and quite unsurprisingly, has granted the 2014 Model S with the five-star safety rating that the earlier model got.

The latest crash test results don’t come across as surprising because the Model S didn’t undergo any major changes for the 2014 model.

As for the various fire incidents that happened recently, they surely don’t seem to warrant any action from the manufacturer and Tesla has already confirmed that there would be no recall for the 2014 model year Tesla Model S.