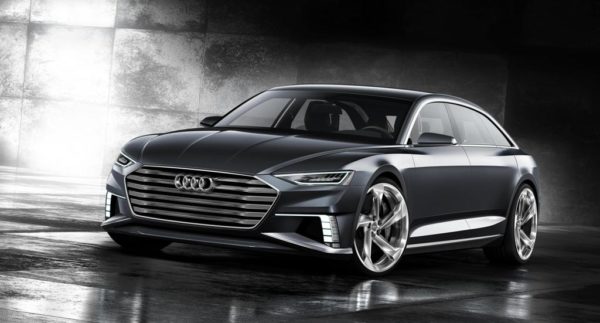 Isn’t this the sexiest estate/wagon that you’ve laid your eyes upon in recent times? We’re sure it is. Based on the stunning Prologue coupé concept that wooed people at the LA Auto Show last year, this estate version, according to Audi, is a new interpretation of the Avant (estate/wagon in Audi speak) philosophy. It’ll also be driven by a high-performance hybrid power-train with 455 PS and 750 Nm (553.2 lb-ft) of torque.

With a length of 5.11 metres, a wheelbase of 3.04 metres, a width of 1.97 metres and a height of 1.4 metres, the Audi Prologue Avant is a little larger than the two-door coupé Audi prologue. Four individual seats, four doors and a large tailgate round off the concept. 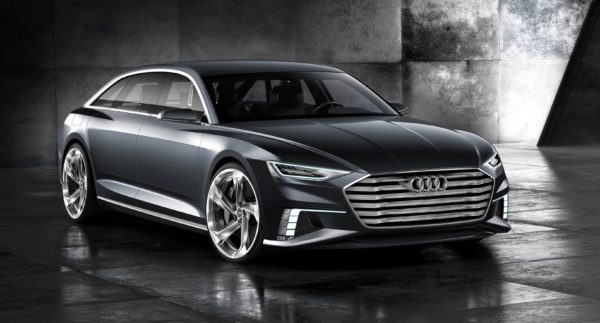 Up front, the Singleframe grille is positioned lower and is designed much wider than in current production models. Its cross ribs made from brushed aluminium present a new variant of the e-tron look, providing a closed visual appearance. Towards the sides, they are slightly bent and forked. Shaped like wide, flat wedges, the headlamps are located with their tips above the Singleframe. They present the high-resolution Matrix Laser technology – the latest light innovation by Audi opens up new opportunities in design and technology. The light is decomposed into a high number of tiny pixels, resulting in virtually unlimited distribution possibilities.

On the sides, the wide, folded-out shoulders above the four wheels are inspired by the “blisters” of the Audi proto quattro dating back to the eighties. The wheel houses are strongly vaulted out and carry wide wheel mirrors, thus visually reducing the metal volume of the flanks. They surround the mighty 22-inch wheels carrying size 285/30 tyres. Their five arms with the edged, sharp-angled spokes present a further development of today’s rotor design. 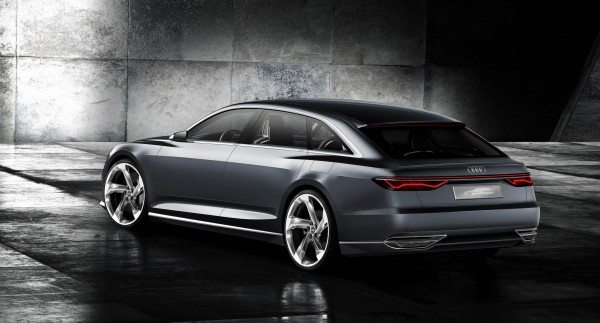 The flowing rear is the highlight of the Prologue Avant. The flatly arranged D-pillars sweep into the rear body shoulder which forms the edge of the luggage compartment lid and surrounds the entire rear section. The rear section itself is leaning forward in the direction of travel like a yacht – pushing off the car before it even starts moving.

The rear lamp strip runs across the full width of the car, thus combining the LED rear lamps. They consist of 3D glass which has a sculptural effect. At their bottom end, the rear light draws a wavy contour. Deep inside the lamps lies the brake light – when it becomes active, it appears to approach the viewer.

As a logical continuation of the side sills, a distinctive apron completes the rear section towards the bottom. On either side it integrates flat horizontally split openings with a wedge-shaped cut. The exhaust gas of the TDI engine comes out through the upper openings. 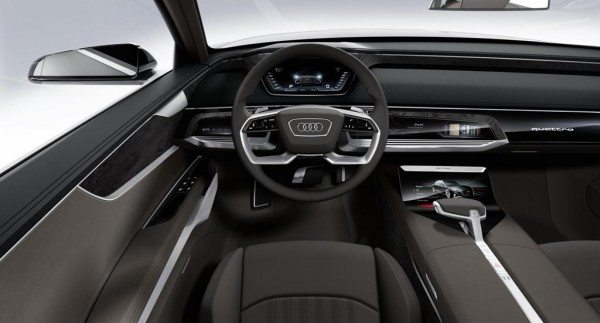 The luxurious interior is kept in dark shades. Moreover, the driver and up to three passengers can establish a digital communication via two OLED-displays made from organic LEDs. The extremely slim, detachable OLED displays in the rear – a spin-off of the Audi tablet from the new Audi Q7 – provide passengers with on-demand information and entertainment.

The instrument panel stretches horizontally from one side to the other, and also lowers itself towards the driver and the co-driver on two levels. The upper level, like a roof, lies over the Audi virtual cockpit future and the wide air vents. It forms part of the wrap‑around encompassing the interior and luggage compartment like a horizon.

The plug-in hybrid drive of the Audi prologue Avant is almost identical to the powertrain in the Audi Q7 e-tron quattro which will be launched in summer 2015. The 3.0 TDI engine installed in the Audi prologue Avant outputs a maximum of 353 PS, and a powerful electric motor integrated in the eight-speed tiptronic contributes up to 100 kW. System output is 455 PS, while system torque is 750 Nm (553.2 lb-ft). The eight-speed tiptronic directs engine power to the quattro permanent all-wheel drive ensuring superior drive characteristics in any situation.

The show car accelerates from 0 to 62 mph in 5.1 seconds. Its top speed is limited to 155 mph. The Audi prologue Avant is capable of returning up to 176mpg combined according to the NEDC standard for plug-in hybrid vehicles – corresponding to 43 grams of carbon emissions per kilometre. The lithium-ion battery pack in the rear storing 14.1 kWh of energy gives the car a range of 33.6 miles in pure electric drive mode.

The Audi prologue Avant will be unveiled next week at the 2015 Geneva Motor Show.