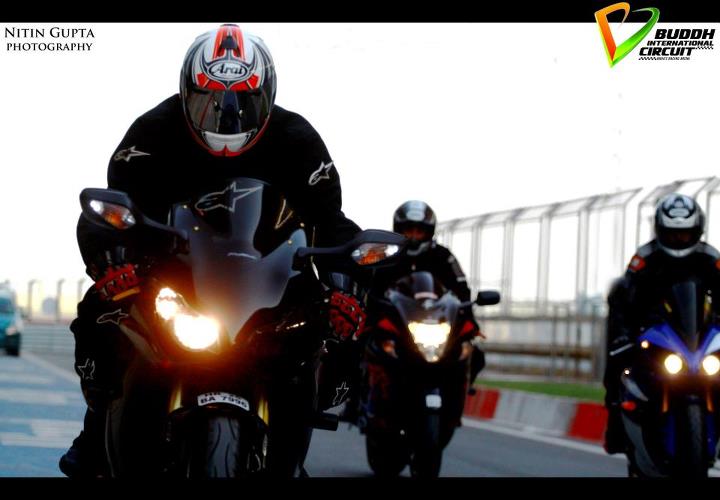 The summers are approaching, it is getting hotter and Delhi prepares for a hot summer.  People are getting summer clothes, which are light and will keep them cool. But then there are always some break aways. Some bought new leather suits, new leather shoes – just wearing them will give you dehydration on a hot summer afternoon. However these bikers and drivers did not mind. It was a day they had been waiting for, for a long time. It was the open track day at an international F1 Circuit. I did not ride on the track but I was there to experience the event. I must say it’s a initiative in a good direction and things can only get better.

The event was organized by JSPI. The format for the track day was very simple – You pay for either 1 or three sessions (20 mins each) and you drive your car or ride your bike on a perfect asphalt surface, smelling of F1 tyres, as fast as you can. No stray dogs to worry about, no traffic, no red lights, no traffic coming in the opposite direction. Only limiting thing was either your car/ bike but mostly just you. I am more of a biker than a driver so I shall review the event from that lens. They were about 30 bikes and about 50 cars. Most of the bikes were Superbikes and most of them were Hayabusas. There were two BM S1000RR, MV Augusta F4, couple of CBR 1000RRs and apple of everyone’s eye was a Ducati Diavel. There were some ‘humble’ bikes as well – two R15’s, one CBR 250R and a Ninja 250R. BIC is one of the longest F1 circuits and the fastest guy, on the S1000R did 4 laps in the 20 min session while most did 3. I observed that while everyone dashed through the straights all ducked down, they stood on their breaks, missed their lines and hardly leaned their bikes to go faster around a curve. Most riders showed improvements in subsequent sessions and while most felt much more confident about their riding at the end of the day there was still much more scope to learn. The event was well organized and offered what they had promised – an open track day. Having the experience of handling a F1 race, they know how to run the show. However, I personally feel there is a scope to have a better experience from the event. It has to come from both the event organizers and the participants. There was a clear announcement that bike session would start at 01:00 PM. In such a case, all the bikes should be lined up, in 2 x 2 formation 5 mins to 01:00 PM and then let go at few secs intervals. They did so for cars but would have appreciated a little more discipline from bikes. Once on the tracks, their aftermarket and free flow exhausts make deafening noises, now I know what heaven sounds like. I had the opportunity to go on the track in an official car which went to re-arrange the course for bike session. The turns are wide and asphalt is smoother than Angelina Jolie’s skin.  As riders and drivers pulled into the pits, they were probably at their happiest moment of their lives. But then there are those who feel, there is still so much more to learn.

Track day hits you in the face. It is in fact very humbling. I say from experience. I did not ride on BIC but I have ridden on a track before on my Ninja ZX 7R. You realize that your street riding experience is just 10% of the skills you require on the track. Especially when you have 180 Bhp on your wrists. Just pinning the throttle on your turbocharged bike will not do anymore. You need to have more horse power in your balls than in your bike. Everything – your vision, your weight, your wrist, your foot and most of all your brain have to work in unison to make magic. Unlearning and learning have to go hand in hand. Just like any other sport, this too needs proper guidance and direction. We are not playing gully cricket anymore with a tennis ball. This is real thing. It was disheartening to see that people with really good bikes – the busas and the blades are going around the corners slower than a Delhi auto driver. Should I blame them entirely? I do not think so. There was no opportunity up here in north till now to ride in a closed circuit to be able to learn the techniques of fast riding. However there were humble R15’s and CBR 250’s as well who were overtaking much bigger bikes on the turns – basically where it really matters. I am not saying that out of jealousy or anything. I have owned a SBK in the past so I am over that. The difference in skills was for two reasons – i) the smaller bike riders have had the experience of riding on twisties of Himalayas and ii) they were there to see full potential of themselves and their bikes. However, there were some really good riders on their blades, Augusta and BMW. I hope other riders can learn from them.

It is a great initiative and I hope they continue to organize such events in the future. There is a scope for improvement though. There should be a day dedicated for bikes and a day for cars. Bikes and Cars should be divided into groups depending on their engine capacities. Each session should have instructional drivers showing the correct line around the track and they should observe the drivers for mistakes they are making. There should also be classroom sessions where more theoretical knowledge should be imparted by professionals. However, this does not undermine anyone. I am glad JSPI took this step and I wish them all the best.

So be on the lookout guys. Next time this happens, be there.