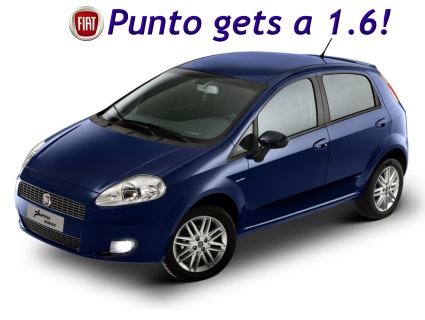 FIAT has released official details and photos of a new variant in its successful Punto line-up – the 1.6-litre E.torQ petrol! The engine runs on petrol as well as ethanol and is good for an output of 115/117bhp on petrol/ethanol respectively. The new E.torQ mill is good for 165 Nm of torque. Like the Active / Emotion / Lose Motion variants that we have been exposed to in India, the Punto 1.6 will spawn a new variant called the ‘Essence’. FIAT expects the new engine to return a fuel efficiency of 16 kmpl on the highway and 12 kmpl on in the city on petrol. The 16V E.torQ engines will replace the 1.8 and 1.9-litre engines that powered the Punto and the Linea in Brazil and Argentina.

Will FIAT bring these engines to India? Too hard to tell. FIAT does have a lot of plans in the pipeline for the Punto and the Linea. With 1.6-litre varaints coming in the Polo and the Vento, FIAT Powertrain Technologies’ (FPT) Indian arm may consider producing/importing the E.torQ engine in India not just for the Punto and the Linea but for the upcoming 2012 Palio as well. But with the 1.4 T-jet powered Linea on the cards already, the 1.6 E.torQ seems like a distant dream for now.