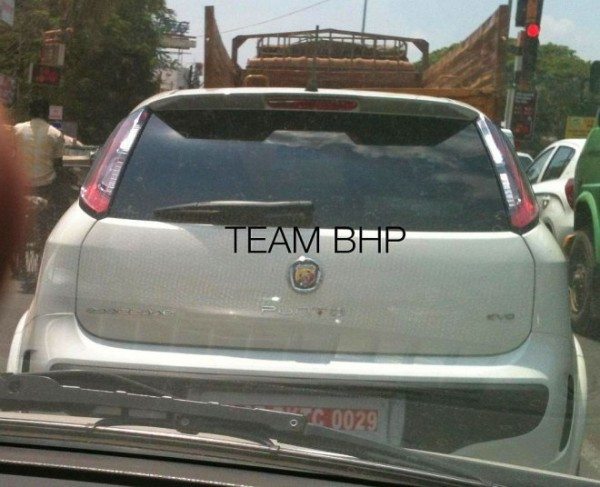 Every car enthusiast in the country is eagerly waiting for the Abarth cars that Fiat India plans to launch this year. Regulars here would remember that we were the first ones to report that the first Abarth car to come from Fiat India would be the Punto Abarth Evo. The Fiat Punto Abarth will be basically a highly souped up variant of the Punto B segment hatchback. The Fiat Punto Abarth Evo is slated to be launched in June and is looking poised to open the gates to a new segment of Indian car market.

A Fiat Punto Abarth Evo test mule has now been spotted testing in India. The car seen is the EssEsse variant and was caught testing in Coimbatore.

It is expected that the new Fiat Punto Abarth Evo will be powered by a 1.4 Litre T-Jet turbo petrol motor that has a max power output of 180 Bhp and a peak torque figure of 270 Nm. The Punto Abarth is being expected to have a top whack of more than 200kmph and a 0-100 Kmph timing of less than 8 seconds. The motor is being expected to be mated to a 6 speed manual gearbox. Visual updates would include a set of sporty 17 inch alloy wheels, Abarth decals and special paint options. Other mechanical changes would include a retuned suspension for sharper handling.

It is being said that Fiat Abarth cars would be manufactured in India and would hence be priced very competitively. We won’t be too surprised to see Fiat Abarth cars finding quite a few takers in Indian car market.