The Italian F1 team Ferrari joined the ‘taxi ride’ fun after the recent Singapore grand prix, by sending a bill to the Red Bull driver Mark Webber for hitching a ride with Ferrari’s Fernando Alonso, back to the pits after the race.

For the uninformed, Australian driver Mark Webber sat on Alsono’s car while returning back to the pits after Mark had to abandon the car after engine failure. The FIA has taken a serious note of this and penalised Mark Webber. The FIA described this act as “dangerous” and a potential harm to other drivers’ safety. 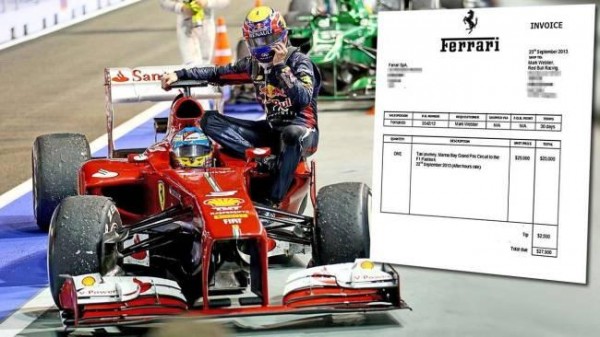 Webber will have to serve a ten-place grid penalty in Korea next weekend for hitching this ride. Also, Webber slammed the stewards’ decision to reprimand him after breaking down towards the end of the race.

Fernando Alonso, however, joined the fun party and posted a photoshopped image of a film poster depicting himself and Webber in a taxi on the social media site-Twitter.

Ferrari also pitched in the funny incident, as the German newspaper Bild published a joke invoice addressed as to be sent from the team’s Maranello headquarters to Mark Webber.

Former F1 driver and legend Niki Lauda supported the FIA’s decision to penalise Mark Webber.
“Yes,” he told Osterreich newspaper, “because it’s against the rules, it’s damn dangerous and because it was always punished with a warning.”