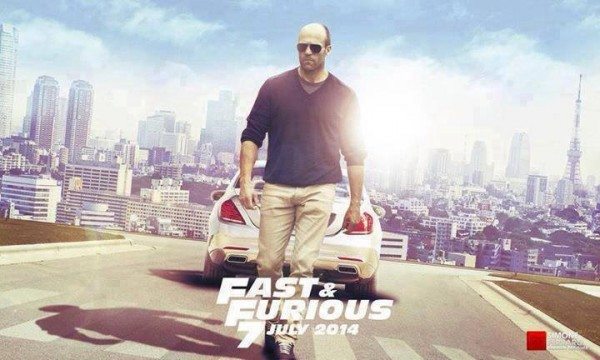 The F&F7 is being directed by James Wan, who has been the director of horror films Saw and Insidious.

Not much is known about the cars of Fast & Furious 7 but this poster reveals that Jason Statham, in true Transporter style, will be seen behind the wheel of a German limo. The car seen in this poster is the new 2014 Mercedes S Class.  It is also being said that the movie has good chances of featuring the Venom GT.

Those who have seen the Fast & Furious 6 would remember that Jason made an entry towards the very end of the film, where he is seen piloting an old school Merc. The last edition was a bit of a drag in the final 30 minutes but Mr Statham lifted the spirits with his appearance. Jason has always been related with German luxury sedans and we just can’t have enough of action from him and his Audi in the Transporter series. He is expected to deliver similar performance with the new S Class in F&F7.

We feel that Jason’s character would be perfectly suited to the latest Merc flagship sedan and we are eagerly awaiting the release of the final chapter in the famous car flick series. What about you?