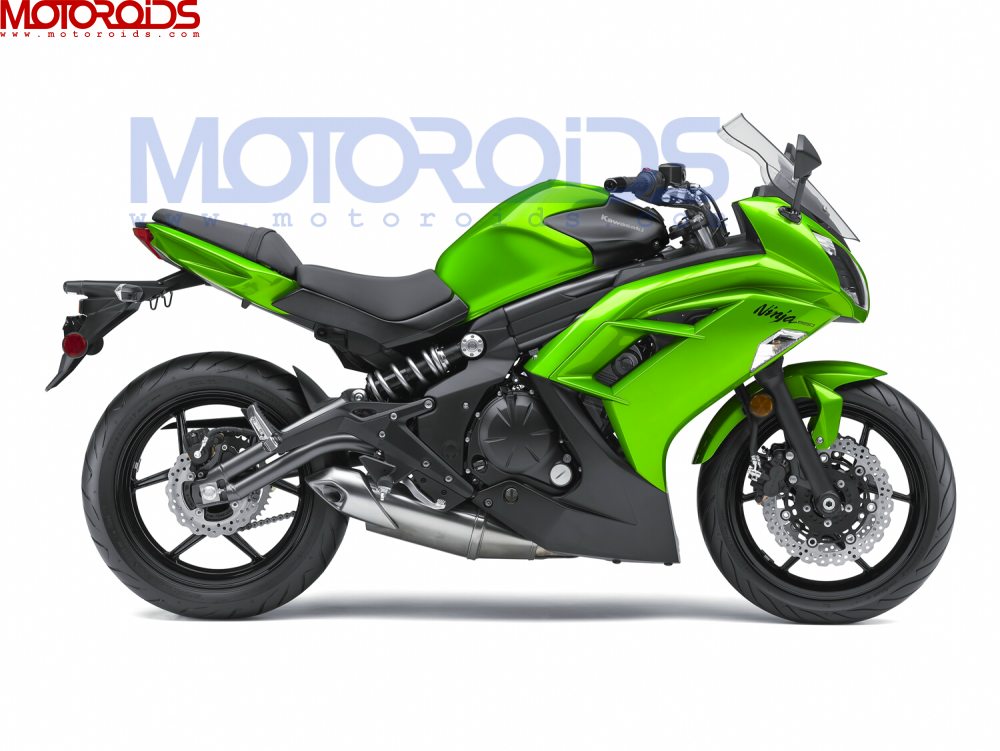 For all of us who thought that the Ninja 650R was getting a tad old in the tooth aesthetically, here’s some really exciting news, thanks to our senior member and Supermod Satyen Poojary. The company is planning to come out with the 2012 version of the bike which witnesses exhaustive changes made to the bike’s styling and design. In its new, 2012 avatar the Ninja 650R looks sharper, more stylish, and more chic.

And it’s not that the changes are just skin deep. While the 649cc parallel twin engine has been left without any major overhaul, the mid-range is claimed to have improved. That apart, the 2012 Ninja 650R boasts an all-new twin-pipe perimeter frame. According to the company, the new frame provides more rigidity and thus aids better handling. While we cannot comment about the handling part, the addition elevates the aesthetic quotient of the new bike several notches up as compared to its current gen version. The suspension has been tuned with more travel for both front and wheels for enhanced comfort.

Design wise, everything from the front fairing, to the windscreen visor, to the fuel tank to the tail section has been given a thorough overhaul. While the 2012 Ninja 650R shares it proportions and dimensions with its predecessors, the detailing and panel shapes are hugely different endowing the new 650 with a sportier, sharper and a more angular look.  Instrumentation is all-new too. The all digital speedo has given way to an analog-digital combo with the tachometer now being represented in the good old analogue fashion.

Kawasaki claims a fuel efficiency of 17.7kmpl for the new bike with a new, bigger fuel tank which can now accommodate 19 liters of fuel for better range.

Here’s a complete list of changes incorporated in the 2012 Ninja 650R, followed by exclusive images of all the details. As always, don’t forget to let us know what you think about the new design of the Ninja 650 via your valuable comments.

The new twin-pipe perimeter frame provides a balanced stiffness for superb handling, and is nearly as light as aluminum. The frame is 50mm narrower at the footpegs for even better rider feel. And its shape blends well with the fuel tank for additional comfort on long rides. The new twin-pipe swingarm is shaped to complement the frame’s flex and rigidity characteristics, and it looks like a million bucks, too.

The 649cc liquid-cooled parallel twin-cylinder engine has been carried over, albeit with some changes which enhance fuel efficiency and mid range performance.

This Ninja has supersport style in an everyday ride. The sleek bodywork is race-inspired, and the six-spoke wheels perform as good as they look. A larger 19 liter fuel tank plus the new Dunlop Roadsmart II radial tires provide a comfortable ride that can go a long way between fuel stops.

The motorcycle’s full fairing and dual headlights give it the full Ninja supersport image. Front turn signals are integrated into the body work. Supersport-style mirrors also mimic the ZX-10R and ZX-6R image, while a newly shaped front fender will help minimize water spray.

An Economical Riding Indicator (ECO) is included in the Ninja 650’s digital display. The indicator appears whenever the motorcycle is being operated in an economical fashion. This convenient feature can help the rider to maximize available range.

An easy-to-read analog tachometer sits above a multi-function digital display that tells the bike’s speed and fuel level, and also includes a clock, odometer, tripmeter and more.

Rider comfort is increased, and is now customizable with the three-position adjustable windscreen. Position the screen high, middle, or low to suit your style.

The Ninja’s new two-piece seat features a slim, comfortable rider saddle that transitions to a nicely padded pillion mount. Both offer wider and thicker foam for 2012.

Placing the muffler under the engine gives the Ninja a great look and allows optimal mass management, keeping the bike’s center of gravity just right. This three-chamber muffler completes an exhaust system that delivers better mid-range power while not losing top end, and it produces ultra-low emissions, meeting all Euro III emissions standards. 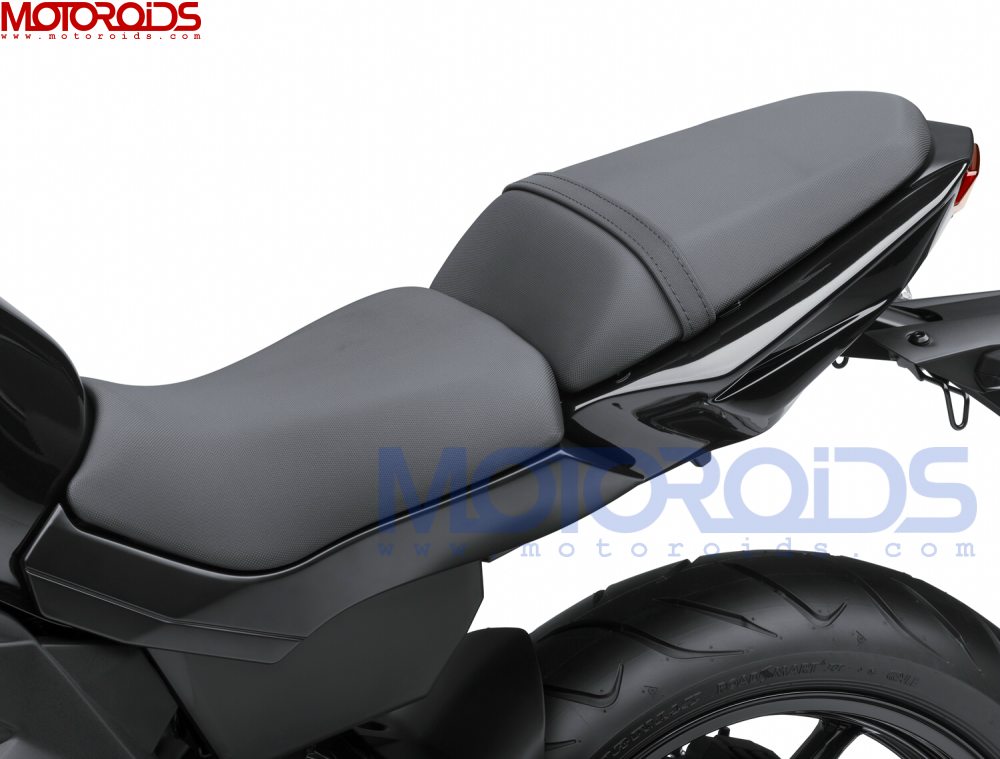 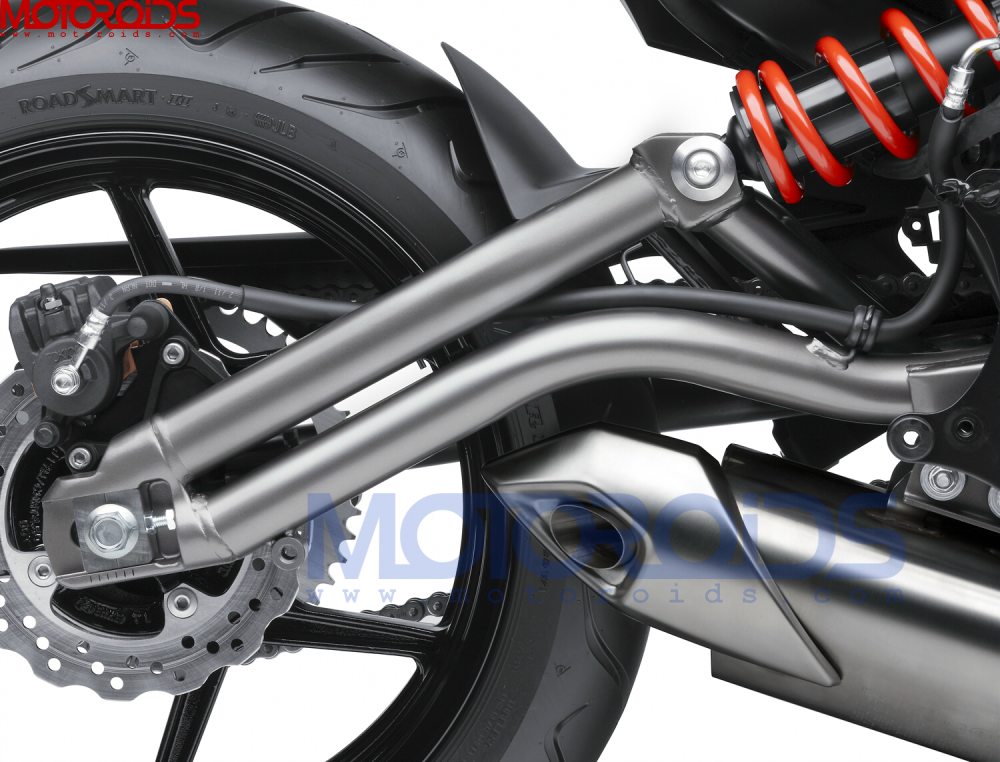 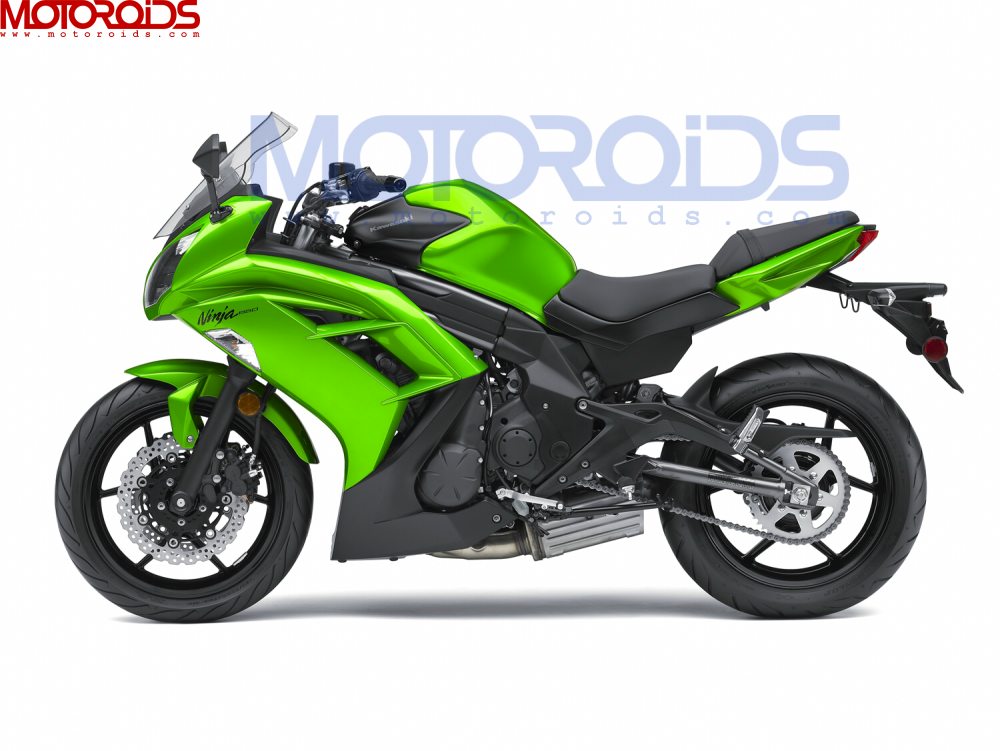 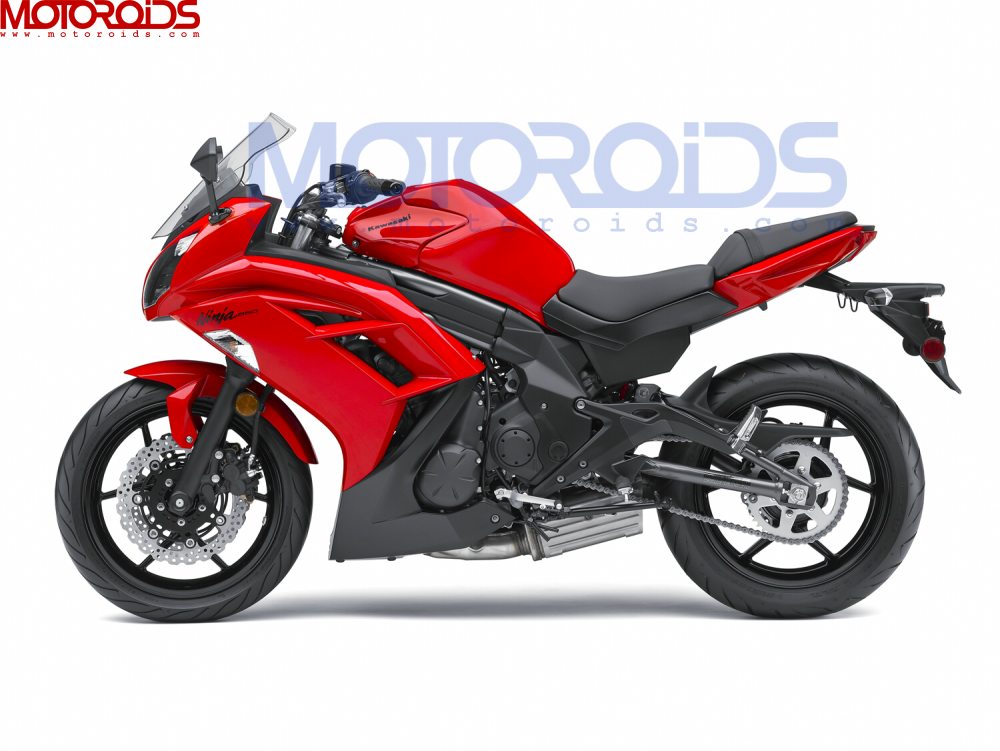 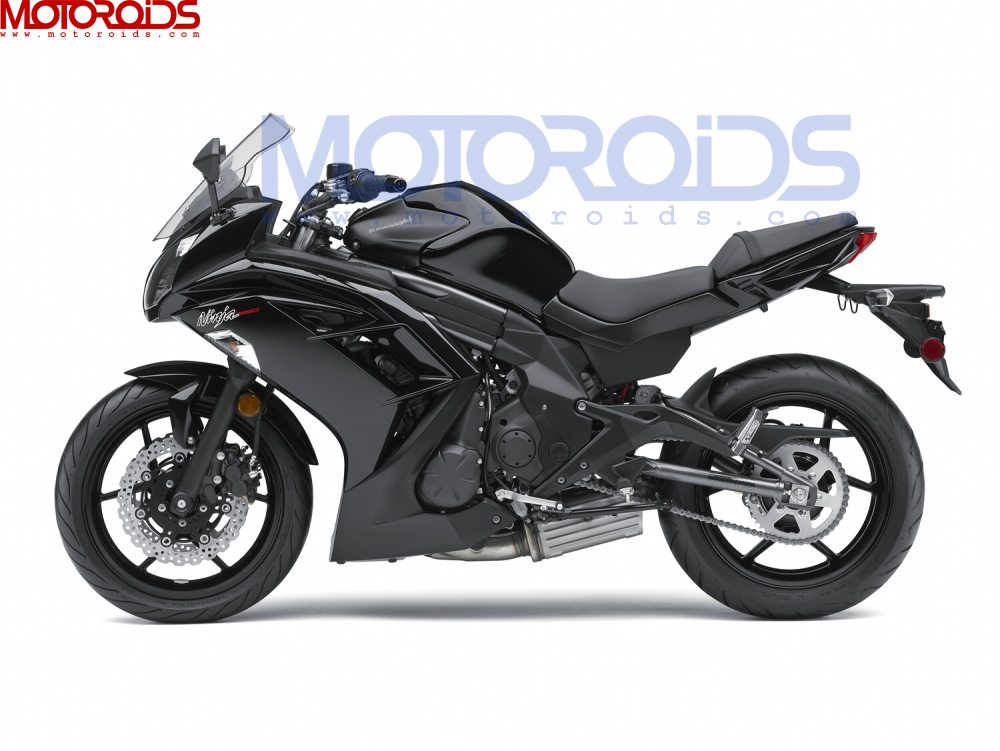 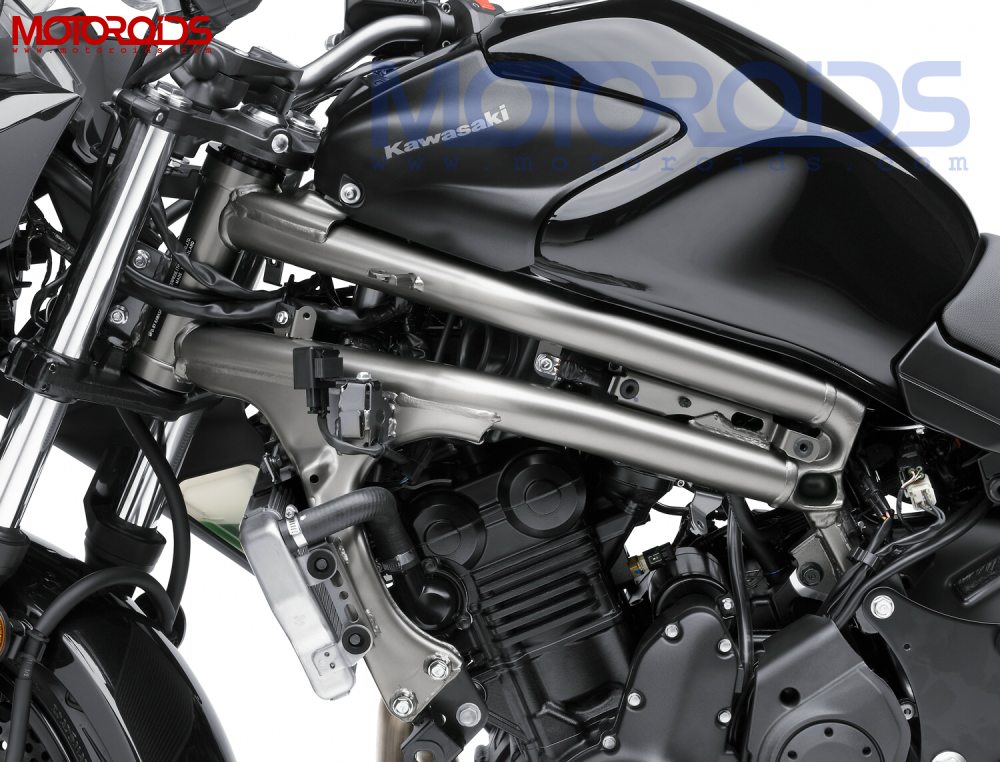 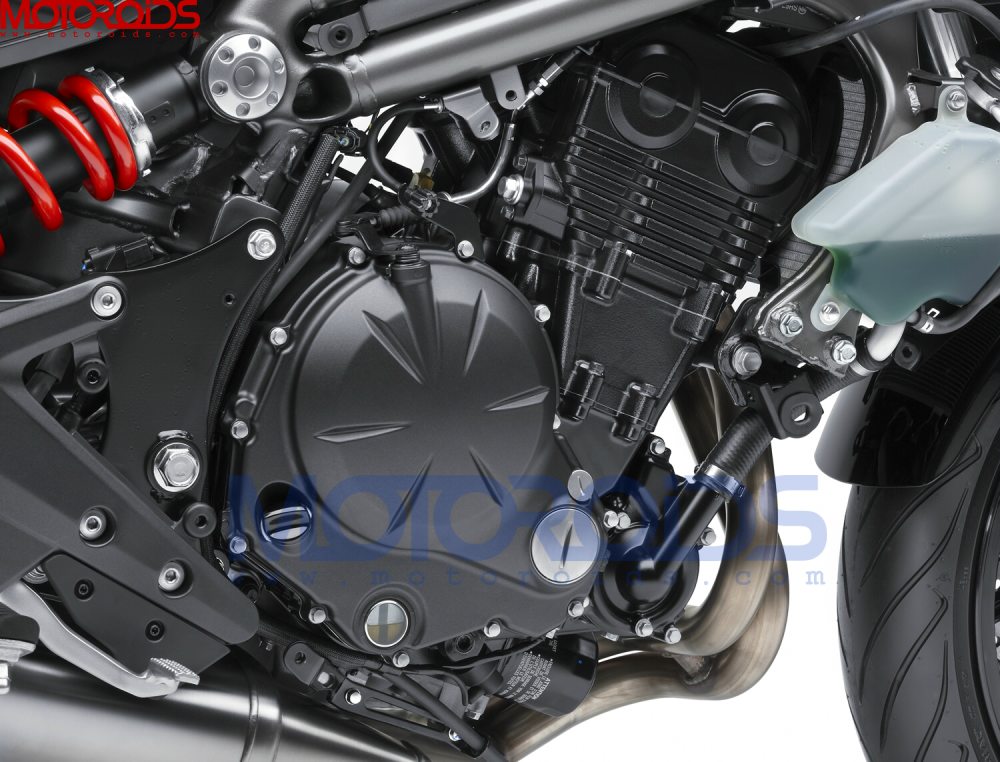 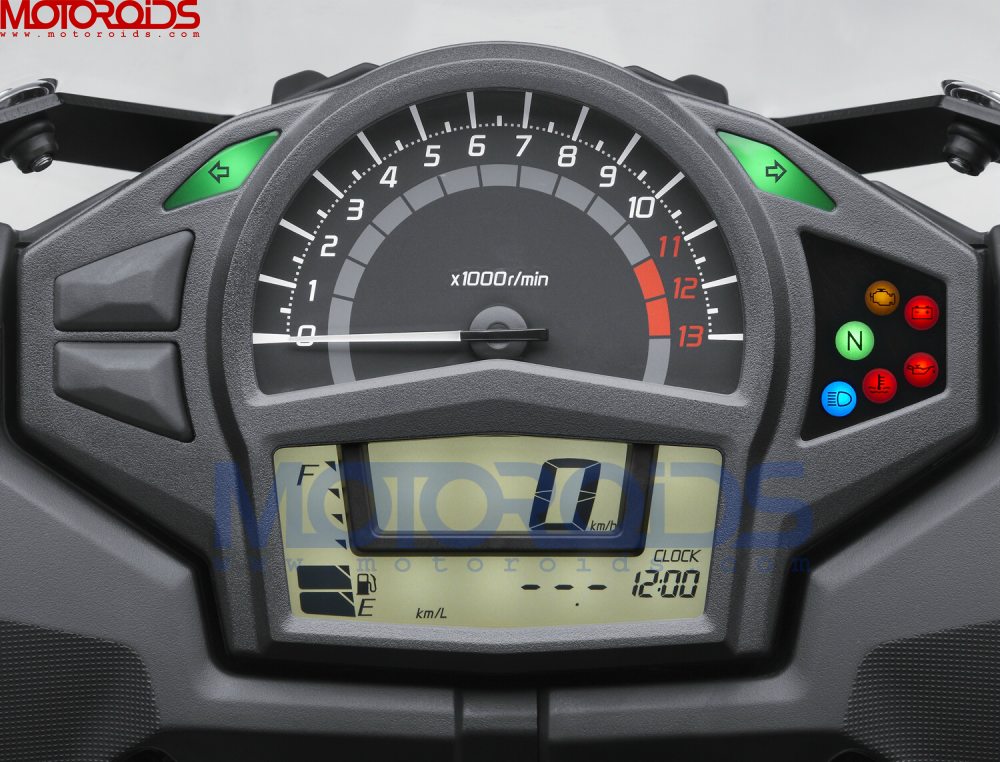 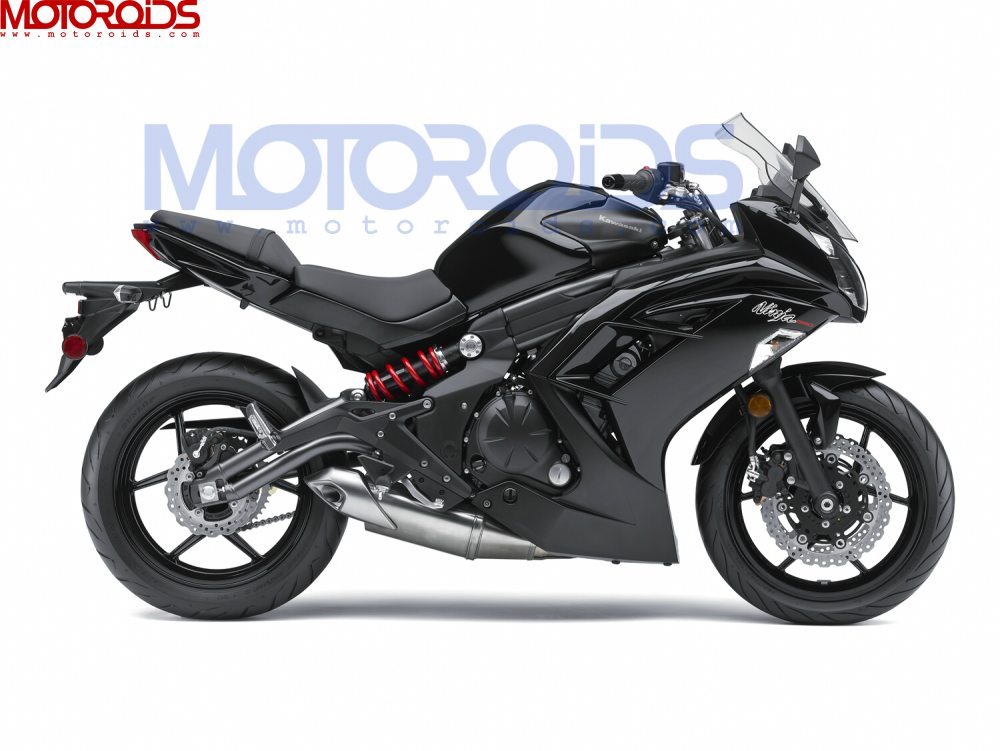 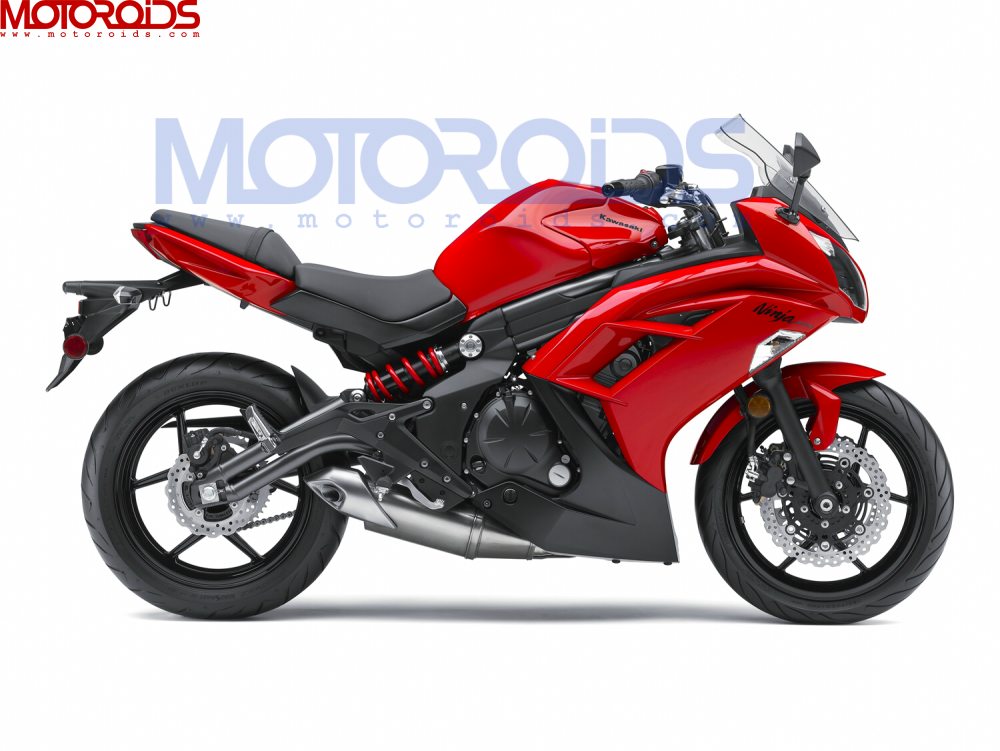 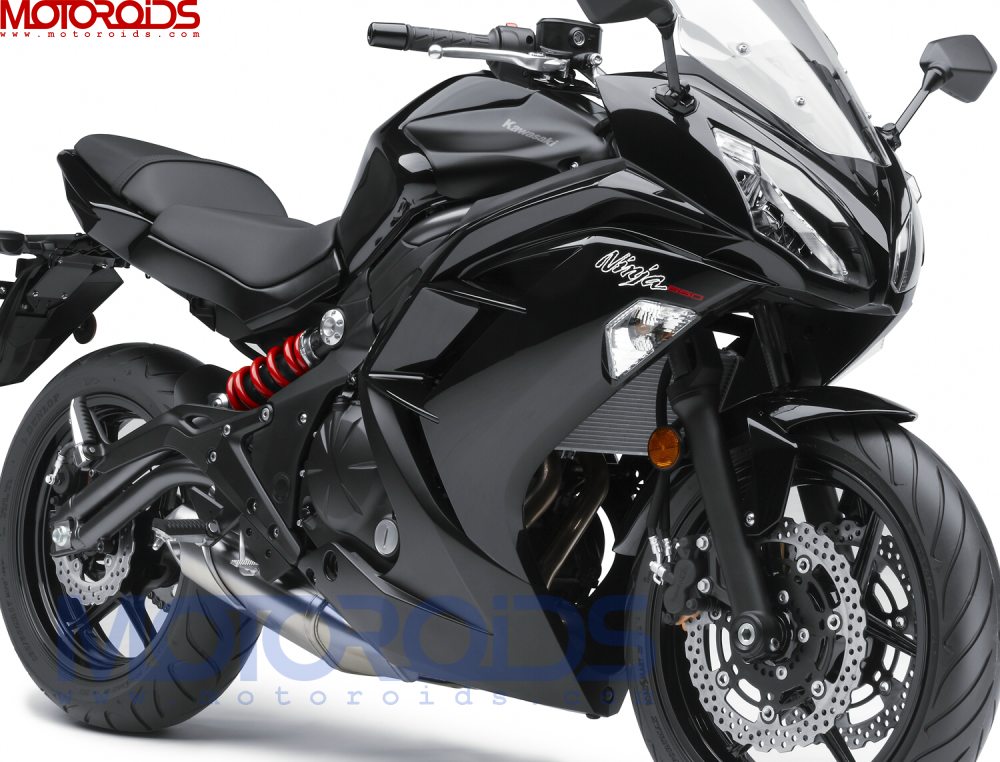 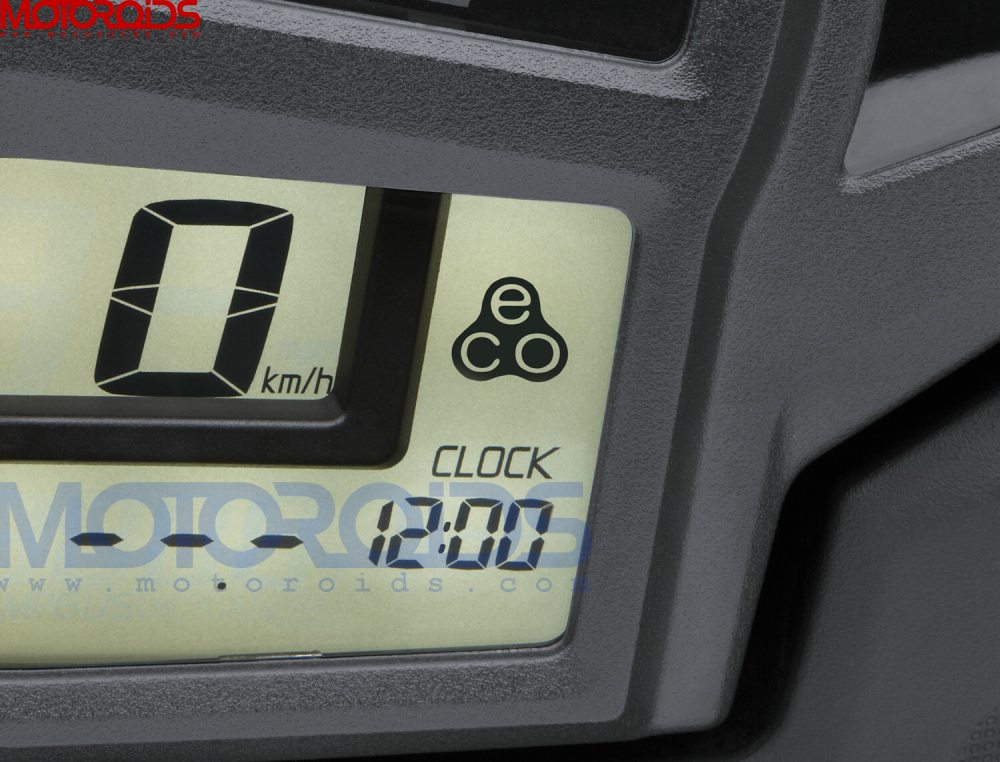 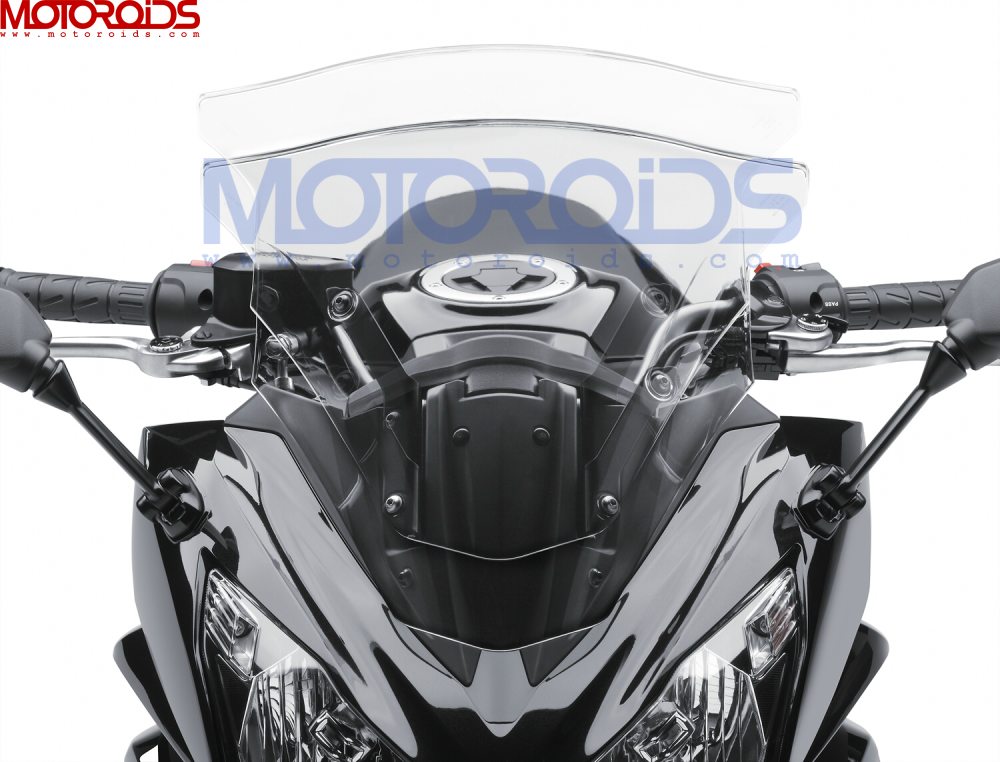 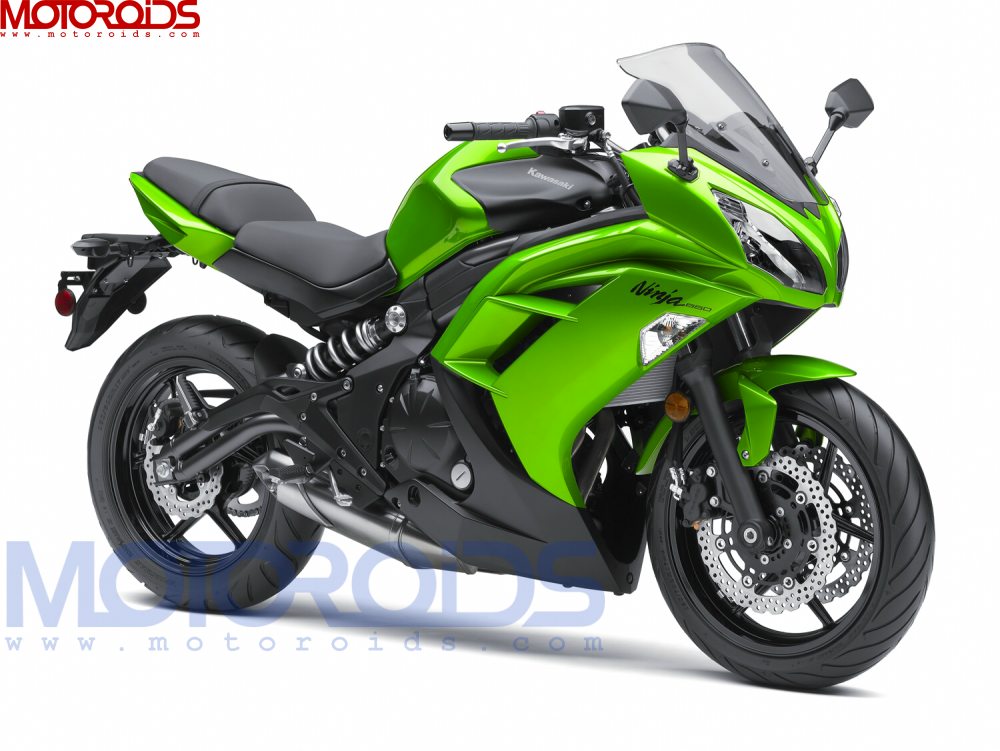 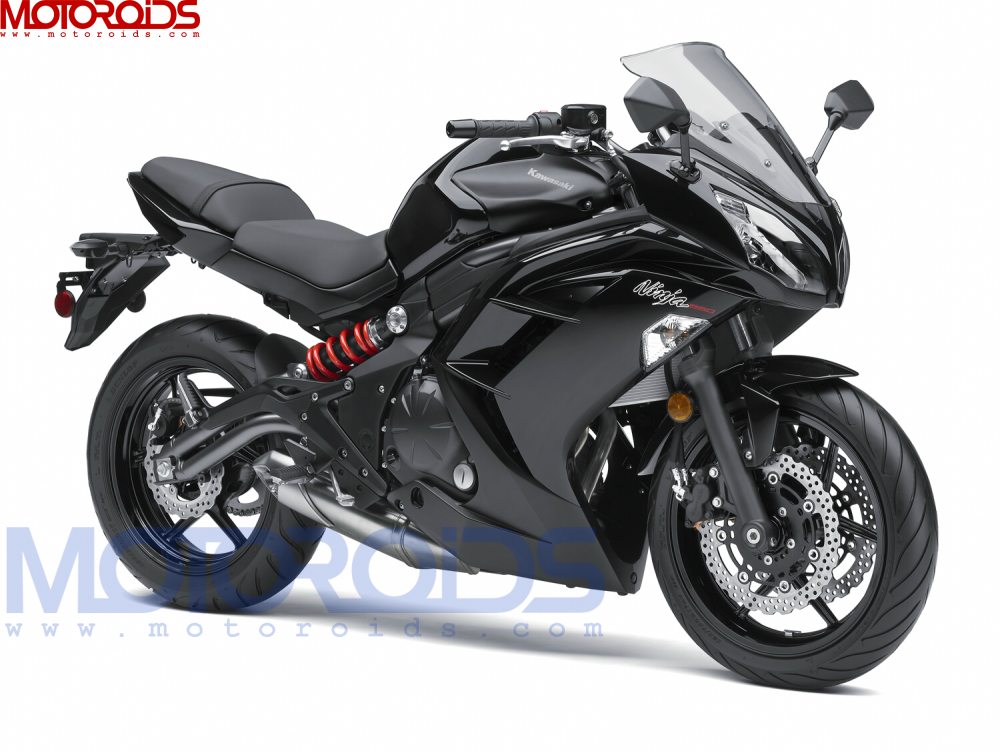 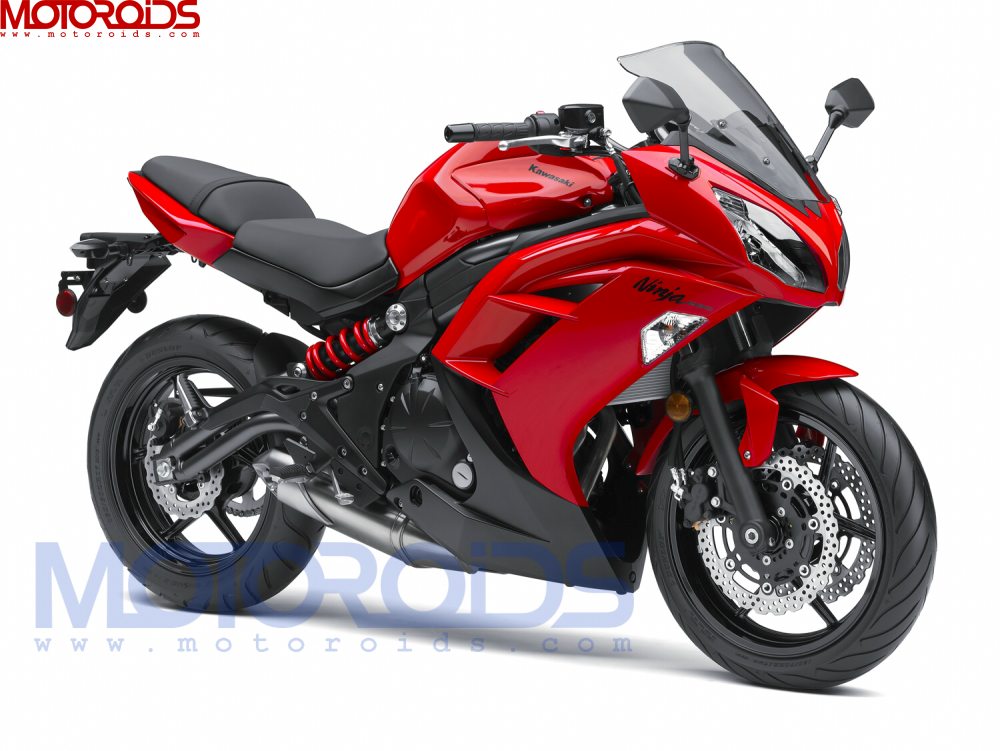 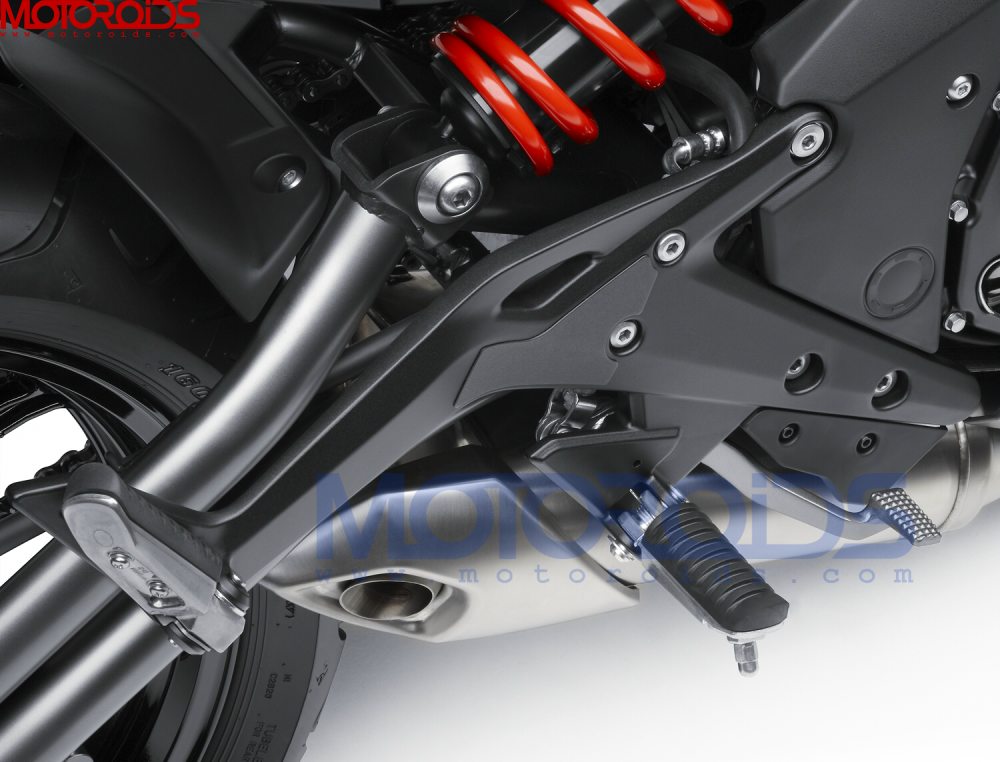 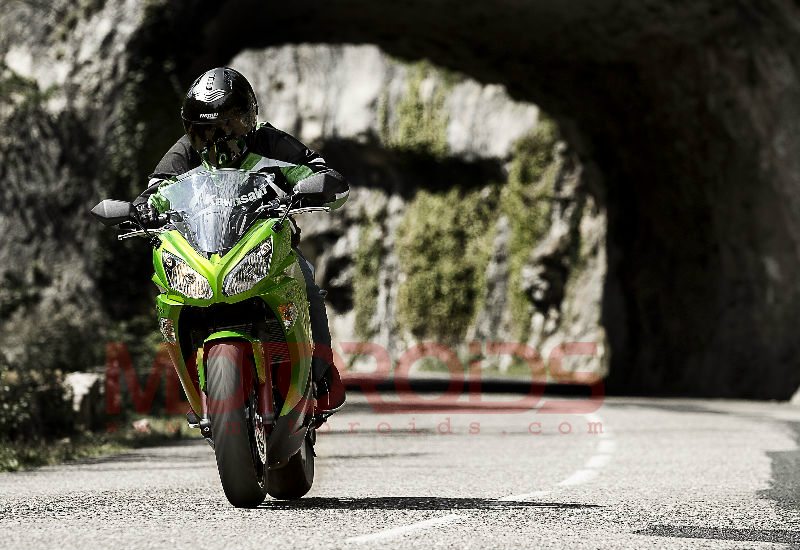 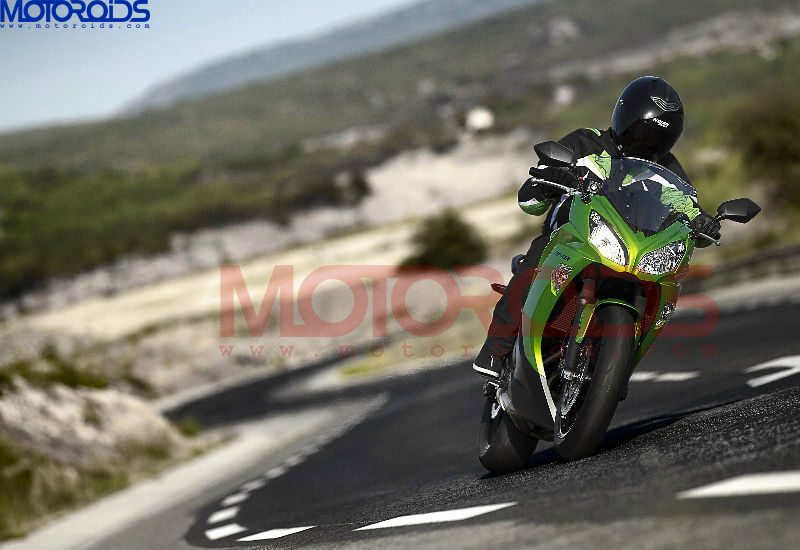 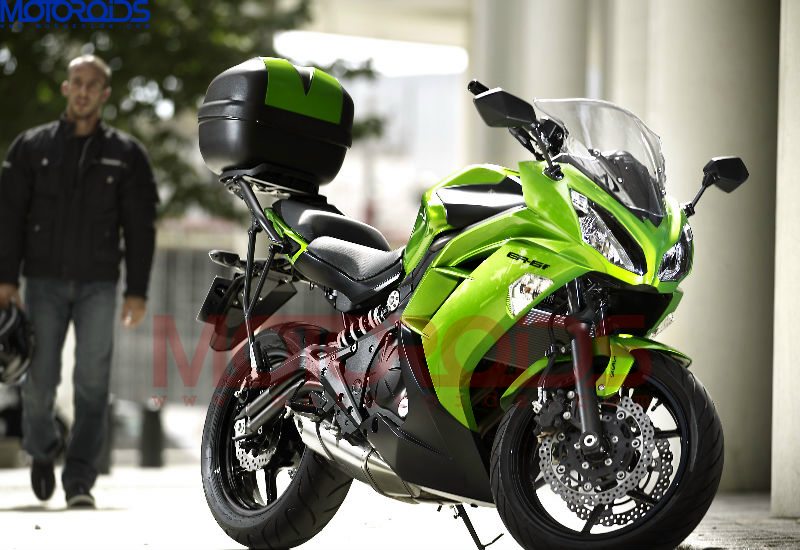 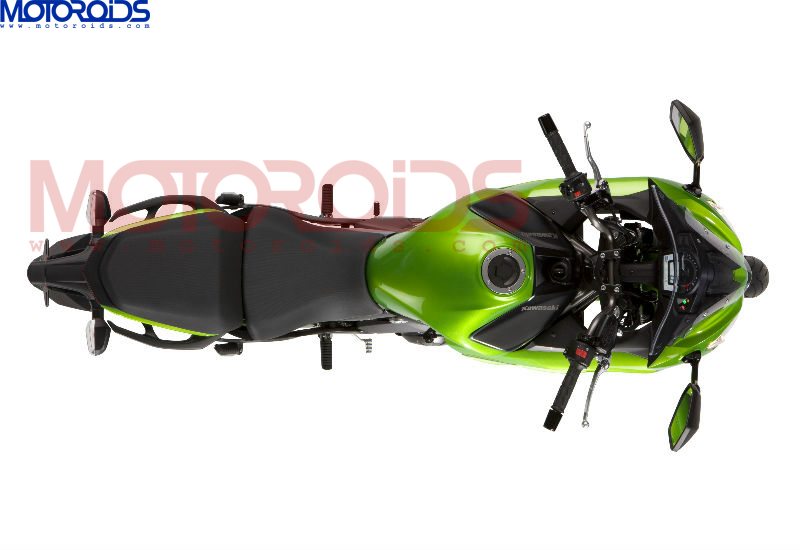 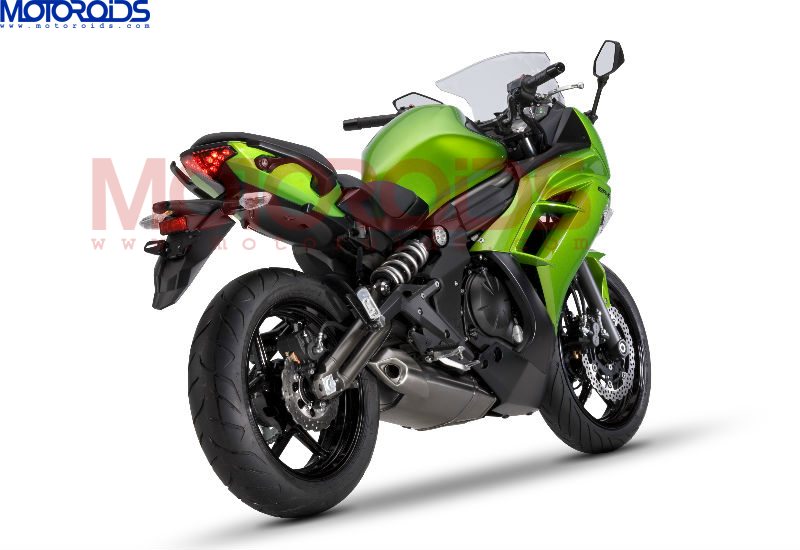 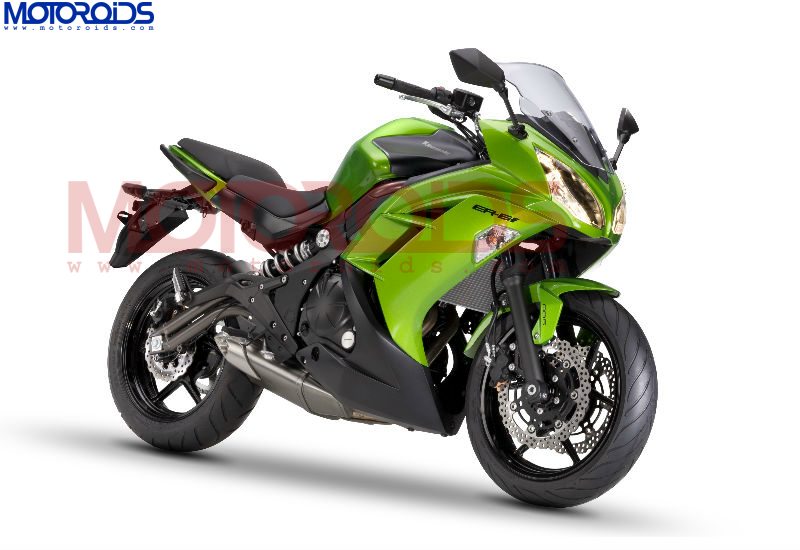 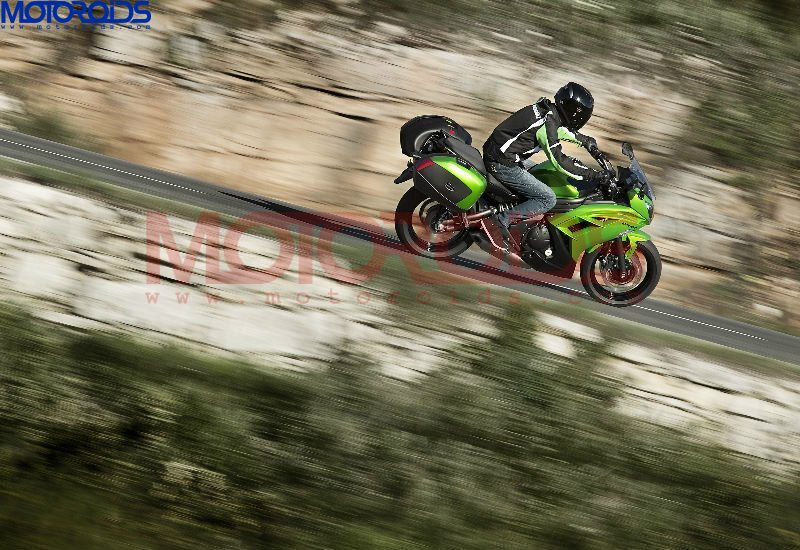