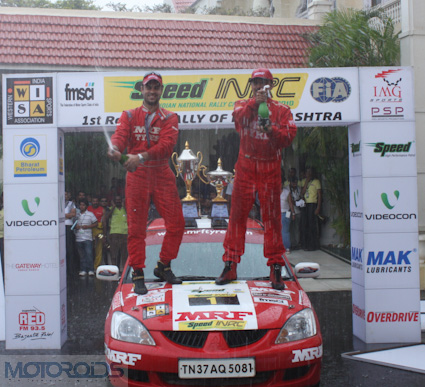 When the whole world was busy watching football WC, a number of drivers were busy trying to prove the point that one needs BALLS to be a rally driver. I am not talking about the WRC here, but the Indian version of the same, the INRC.
INRC completed round one of season 2010 with the completion of Rally of Maharashtra held in Nashik.

It was a great day for Team MRF as Gaurav Gill showcased his beautiful opposite-lock skills and steered his Cedia to claim the top-spot in the first round of INRC. It is the first time that Gill has won in Nashik. Last year he had to retire thanks to his stalled car. We think that all that frustration added up and pushed him to perform a little better this year.
“It was a grand opening round for me and my team MRF. Finally, I got the monkey off my back and broke the Nashik jinx. We went in with a different set-up today and I was more intent on doing some drifts just to give the spectators something to cheer about. Overall, it was a good outing for us and we had no problems with the car.”, said the talented Gill who will start for New Zealand soon for his next round in APRC. The second spot was clinched by Red Rooster Racing’s Vikram Mathias, who with co-driver PVS Murthy managed to set the fastest time on Super Special Stage. His time 1 minute 48.4 seconds  was a whopping 3.1 seconds less than what Gill managed(sideways action Gill, right!). It was Red Rooster again for the third spot with Amittrajit Ghosh and co-driver Aswin Naik.

Next was the Group N category which saw Team Ovion’s Girijashankar Joshy with co-driver Chandramouli complete (and win)their debut rally in just 1hr 29:46.5secs. Team Ovion was keen on taking the second place too with Sujay Suresh and his co-driverVarun Sathyanarayan. The third spot was grabbed by Overdrive’s editor Sirish Chandran with his co-driver Nikhil Pai in the Red Rooster Cedia.

Didnt get enough of the INRC? Head straight to Coimbatore where the second round of INRC will take place. The dates and other details will be posted soon.