For 2018, the Multistrada gets an upgrade with the new Ducati Testastretta DVT (Desmodromic Variable Timing) 1262 cu cm engine, new chassis, more advanced electronics, and an aesthetic update that includes new fairing panels and lighter, sportier looking wheels. With its four souls, many new features and Riding Modes, the Multistrada 1260 brings a whole new level of performance, ease of riding, comfort and fun. 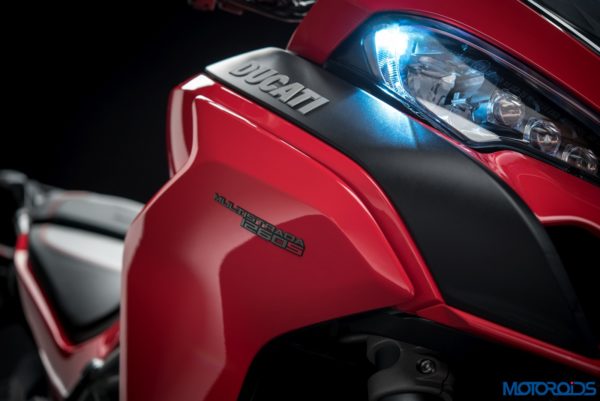 The 1262 cc Ducati Testastretta DVT engine is Euro 4 approved and is claimed to give ample low-to-mid range torque for even better rideability in everyday use. With 85% of the torque available at 3,500 rpm, delivery at 5,500 rpm is 18% higher compared to the predecessor model. This means the Multistrada 1260 offers the highest torque output in its class at 4,000 rpm, i.e. in the most frequently used rpm range.

You May Like – Ducati Multistrada 1200 Enduro Review : Exotic Explorer

Controlling the power delivery is made easy by the new Ride-by-Wire system which is aimed to deliver smoother throttle control, combined with the smoother, more accurate up and downshifting offered by the DQS (Ducati Quick Shift) Up & Down which significantly improves the riding experience. 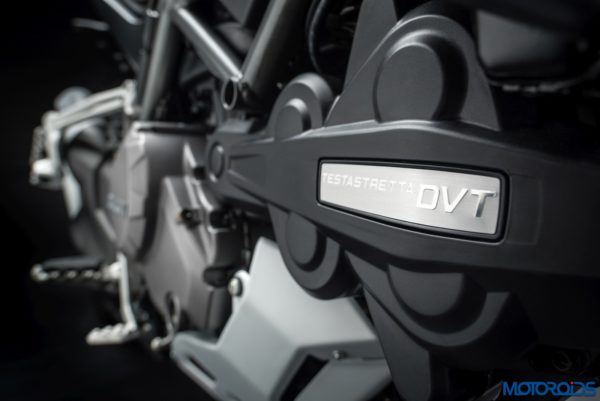 The updated chassis, with a longer swinging arm and wheelbase and revised geometry up front, makes for sharper handling in curves, and ensures full stability even when riding two-up at full load with the side panniers. 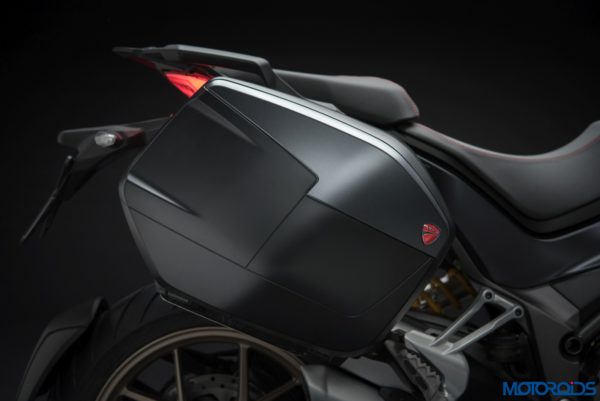 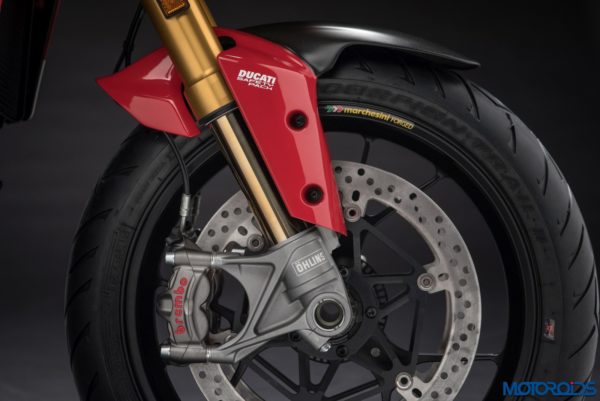 All models feature Cruise Control for the rider to set the desired cruise speed from the controls incorporated in the switchgear on the left handlebar. On the S version, a Bluetooth module is included as standard. This activates the Ducati Multimedia System (DMS) and can connect the bike to a smartphone for user-friendly control of basic functions such as receiving incoming calls, notification of text messages, or playing music via the handlebar controls. The corresponding information is displayed on the new TFT dashboard, unrivalled in terms of user interface and ease of viewing. 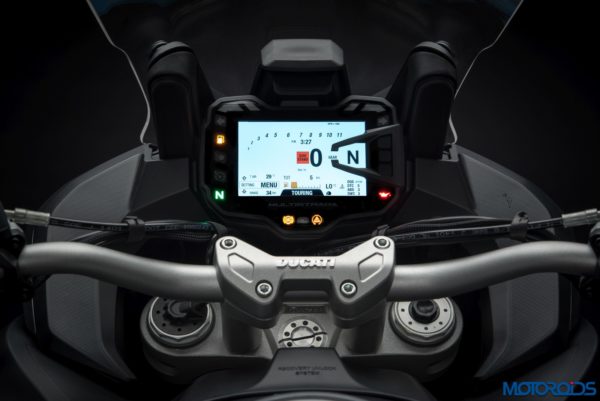 The Multistrada 1260 comes with a new Hands Free system for enhanced security and also offers long maintenance intervals. With an oil change required every 15,000 km and a “Desmo Service” every 30,000 km, Multistrada owners will be able to enjoy even the longest trips with full peace of mind. 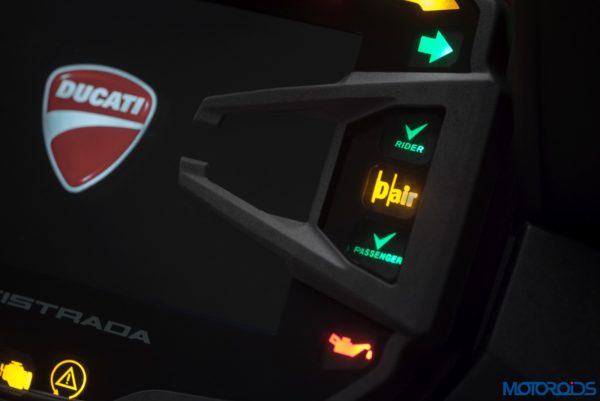 The Pikes Peak version draws its inspiration from the legendary American hill climb race. The Pikes Peak International Hill Climb, also known as the “The Race to the Clouds”, is held in an area of the Rocky Mountains some 16 km west of Colorado Springs. A distance of 20 kilometres separates the starting line, at an altitude of 2,862 metres, from the finishing line at 4,300 m. Ducati has already won the challenging hill climb three times. 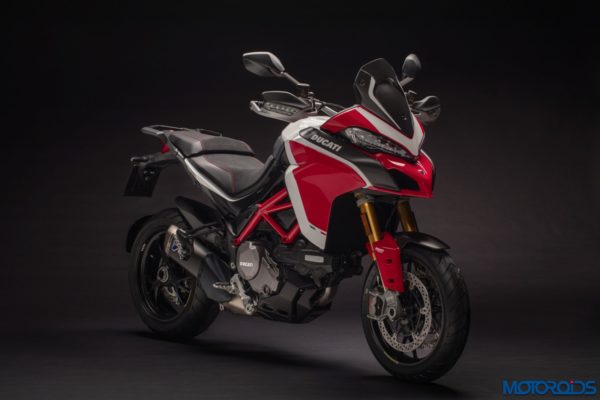 Developed on the technical foundations of the Multistrada 1260 S, the Pikes Peak version benefits from the 1262 cc Euro 4 compliant Ducati Testastretta DVT engine and new chassis dimensions, which include a new front end geometry and a longer swingarm. Along with a race-inspired colour scheme, the Multistrada 1260 Pikes Peak comes equipped with new forged aluminium wheels, which are lighter than those of the Multistrada 1260 S. In addition, the bike is fitted with the Öhlins fork and Öhlins TTX36 shock, which can both be adjusted mechanically.

In addition to the silencer and nose fairing, fitted as standard, a carbon fibre Ducati Performance silencer by Termignoni (EU type-approved) and a low racing-type carbon fibre screen are also available for the Pikes Peak version. Further carbon fibre components include the front mudguard, hands free cover and front side panels, while the red-stitched seat has been specially designed to bring out this Multistrada’s racing spirit. 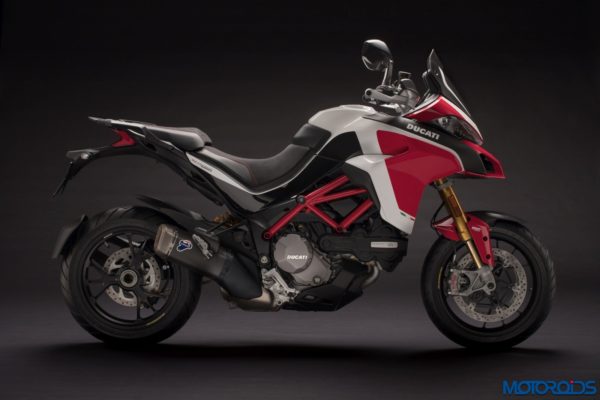 The Multistrada 1260 Pikes Peak is equipped as standard with the Inertial Measurement Unit (IMU), developed by Bosch, which dynamically measures pitch and roll angles and acceleration along the 3 axes, raising performance and safety standards even further. Equipped with Cornering ABS, Cornering Lights (DCL) on the full-LED headlight, Ducati Wheelie Control (DWC), Ducati Traction Control (DTC), Vehicle Hold Control (VHC) and Cruise Control, the Multistrada 1260 Pikes Peak is a concentrate of technology that also features, as standard, a Bluetooth module; the latter, via the Ducati Multimedia System (DMS), lets riders connect the bike to a smartphone and manage key multimedia functions (incoming calls, text messaging, music) via the switchgears and display information on the TFT dashboard, which has been renewed both in terms of graphics and logic. 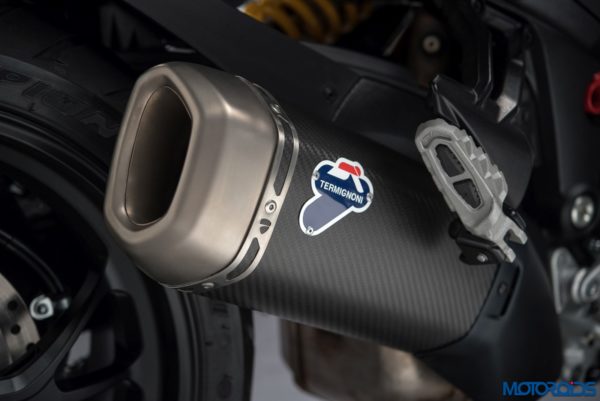 Like other bikes in the family, the Multistrada 1260 Pikes Peak can mount one or more Ducati Performance accessory packages. Also available – in addition to individual items – are the Touring Pack (which includes heated grips, panniers and centre stand), the Urban Pack (with top case, tank bag with tank lock and USB hub to charge electronic devices), the Enduro Pack (consisting of supplementary LED lights and Ducati Performance components by Touratech: engine crash bars, radiator crash bars, sump guard, a broader kickstand base and off-road footpegs). 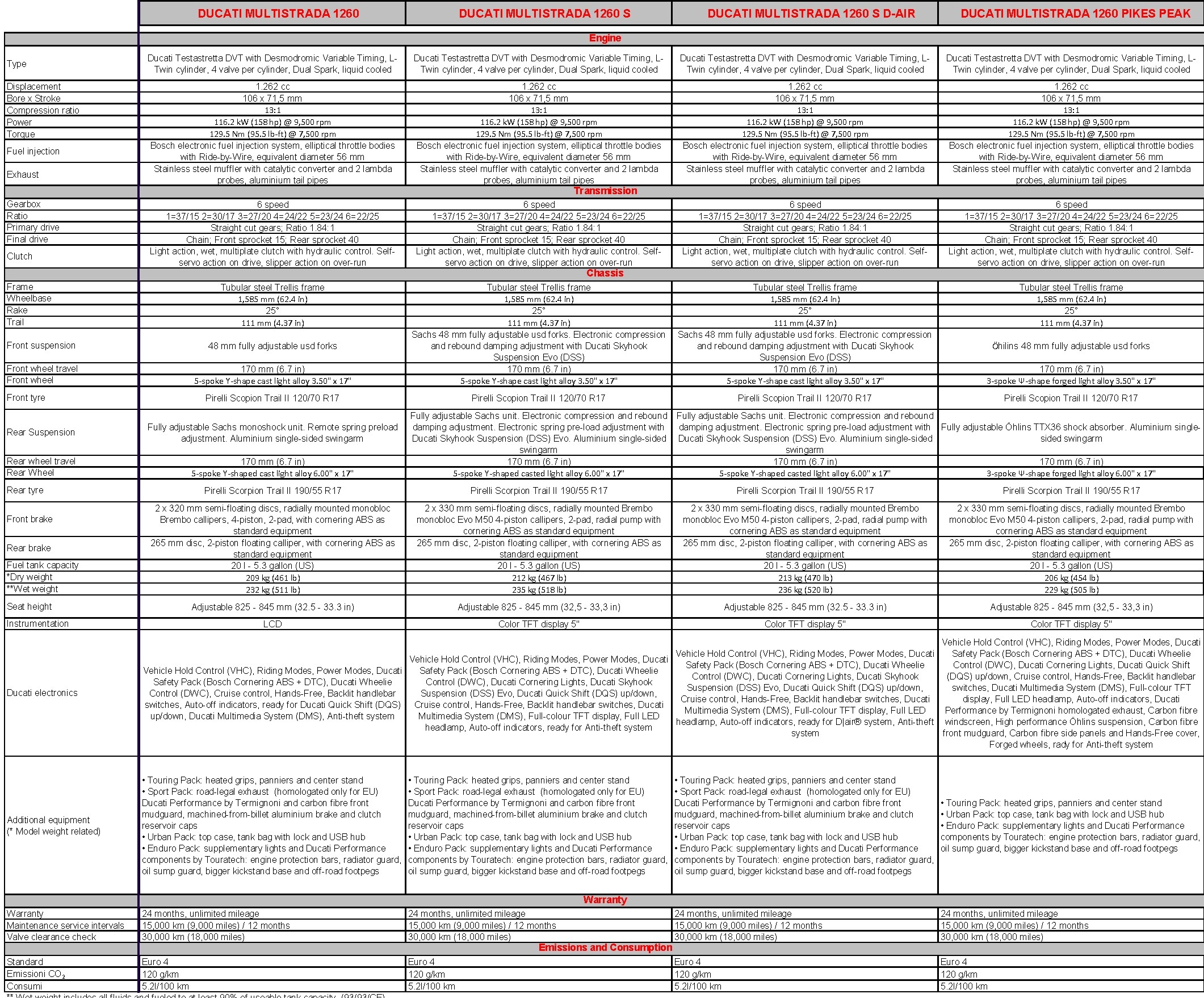