Apart from spearheading a multi-dimensional organization like Mahindra, Anand Mahindra is also known for his contributions to the society. Twiterratis however, are familiar with another side of Anand Mahindra. He often gains the limelight for his wit and also for sharing innovative things happening around the world. In one such video shared by Anand Mahindra on Twitter, an e-rickshaw driver is shown practicing social distancing as he divided his vehicle into four separate compartments to accommodate passengers.

The capabilities of our people to rapidly innovate & adapt to new circumstances never ceases to amaze me. @rajesh664 we need to get him as an advisor to our R&D & product development teams! pic.twitter.com/ssFZUyvMr9

The main takeaway from the current global pandemic is social distancing, which has gradually become the norm now. It would be safe to assume that we will keep practicing it even after the pandemic is over. Indians have a way to come up with a creative and innovative outlook even towards the most critical things. We always figure our way around things. This particular e-rickshaw driver is a testimony to the above-mentioned fact. The driver has divided the seating area into four separate compartments so the passengers cannot come in contact with each other, therefore, successfully practicing social distancing. If we look closely at the video, it is most certainly a 6-seater but has been turned into a 4-seater version now.

Anand Mahindra lauded the efforts put in by the humble e-rickshaw driver and also asked Rajesh Jejurikar, executive director – auto and farm sector to onboard him as an advisor for the R&D as well as product development teams.  Appreciating someone on Twitter is respectable but going ahead and pulling off what Anand Mahindra did, is something else entirely. He wrote on Twitter, “The capabilities of our people to rapidly innovate and adapt to new circumstances never ceases to amaze me.” 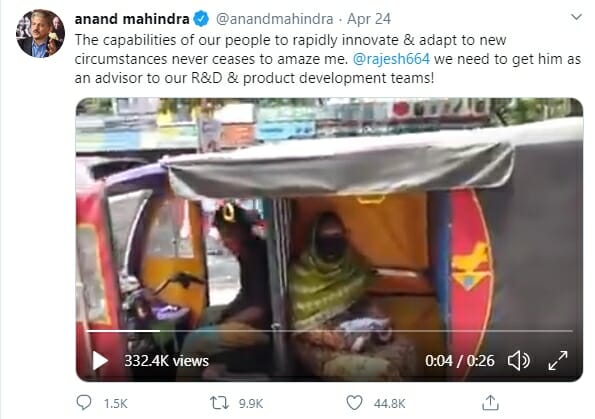 And we do agree with what Anand Mahindra has to say here. Such efforts surely need some recognition and when people like Mr Mahindra back them up, these efforts transform into inspiration. It is likely that even after the lockdown is lifted, we will still have to practice social distancing and other preventive measures. In the meantime, we should too appreciate the efforts put in by the humble e-rickshaw driver.