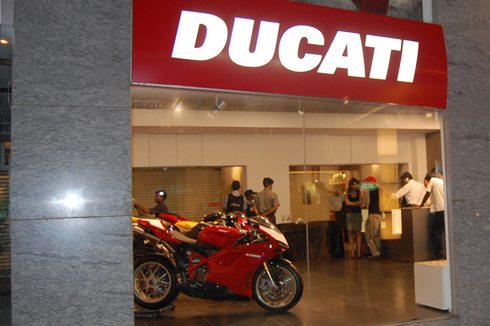 Ducati boss Claudio Domenicali recently dismissed rumours that his firm is developing a scooter. This development comes soon after several reports on internet stating that the famous Italian bike maker has been busy working on a low-capacity scooter.

Replying to one of the queries on this subject, Claudio Domenicali stated: “In the long term small capacity bikes are not for Ducati. The likes of 250, 350 or 500cc bikes will not be seen in the foreseeable future. We think we can develop the expansion we need with our current range and some new products but Ducati is more likely to go into higher technology models than add below the current models. A scooter is not in the foreseeable future for Ducati.”

At a time when most international bike makers are venturing into small bike market, Ducati remains among the only few manufacturers who has refrained from adopting such a strategy. Such is present day scenario that even BMW has decided to come up with a range of small capacity bikes that will be designed in Germany but manufactured in India by TVS. The upcoming small capacity BMW bikes will be unveiled in 2014 and it is being said that the manufacturer recently started the road-testing of prototypes.

It may be noted that this surely isn’t the first time that Domenicali has refuted the claims of Ducati working on a scooter. Previously, he said,“I was asked if Ducati would ever build a scooter. All I said in reply was that I never say never; that is my philosophy always. In order to define the Ducati brand for these modern times we have made changes to the sort of bikes that the company was known for. You can see this with the Multistrada 1200. “For this reason I always say ‘never say never’ about any future models but I can categorically confirm there are no plans to build a Ducati scooter now or in the near future. I cannot understand why this has become such a big story.”