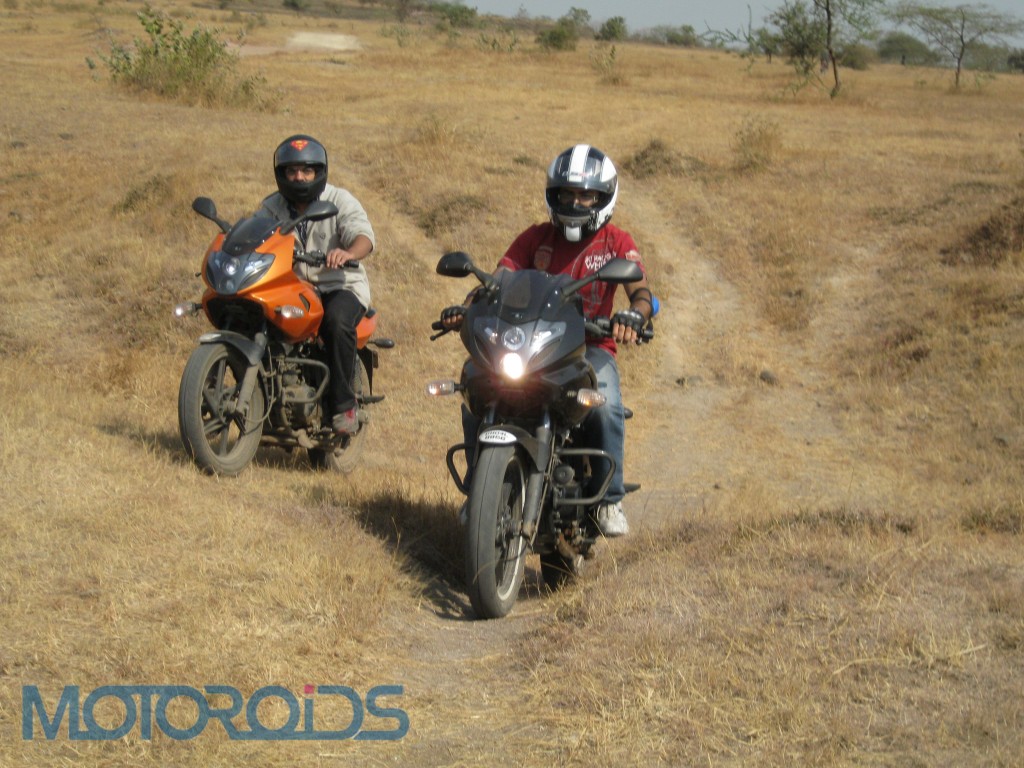 Our Long Term Report on the Bajaj Pulsar 220 DTSi F

We posted in detail about the bike’s ergonomics, performance and the cost of ownership. Today, when dirt road testing an off road bike, a sudden decision saw us taking mine and a friend’s trusted Pulsar 220 DTSi off the road and into the dirt. Our dear readers may ask what made us do something so crazy? Well, we always had that crazy streak in us. The wicked sense of humor that we have, ensued that our bikes roared on the dirt track and we had our fair share of fun (& some hairy moments!).

It may be noted that we did the dirt track run on the 220 purely for our own fun and it is not the poor machine’s fault if it could not impress the off roaders in us. 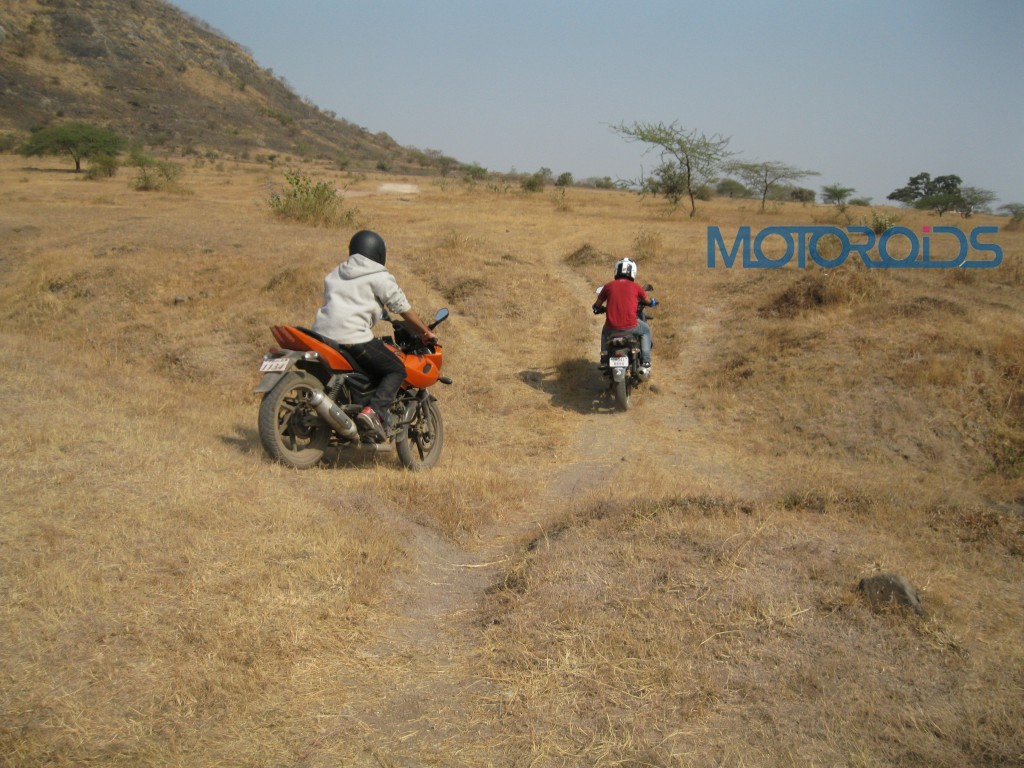 On road, we have always loved the ergonomics of the flagship Bajaj. The clip on style handlebars are well set and are spot on in height. Long journeys do not result in aching wrists. The dirt track ready YZ handles or the after market RD handles seen on Karizmas and modified shoguns would seriously help in steep sand filled turns and also improve the turning radius considerably allowing us to flip the bikes around with ease. The slightly rear set foot pegs too provide a good balance between being overtly track performance oriented (read Yamaha R15) and being commuter class (read Bajaj Discover). A real off roader has a basic idea of keeping the rider’s wait in the center to provide the best center of gravity and thus, an offroader’s footpegs have to be located slightly forward.  However, off the road and as expected, it is altogether a different story. But is it that bad? Read on.

The clip ons feel a tad too close to your body and do not really provide much confidence while tackling ditches and turns. Coming to the foot peg positioning, it is far from being as good as an offroaders but does not really hurt on the occasional dirt track run.

The seat continues providing good support off the road. That said, a little more padding would not had hurt. Coming to the ride height, it is very much unlike the On/Off road bikes and the low ground clearance of the bike makes matters worse here. The main stand keeps kissing the ground and its love affair with bumps meant some really nervous maneuvers. 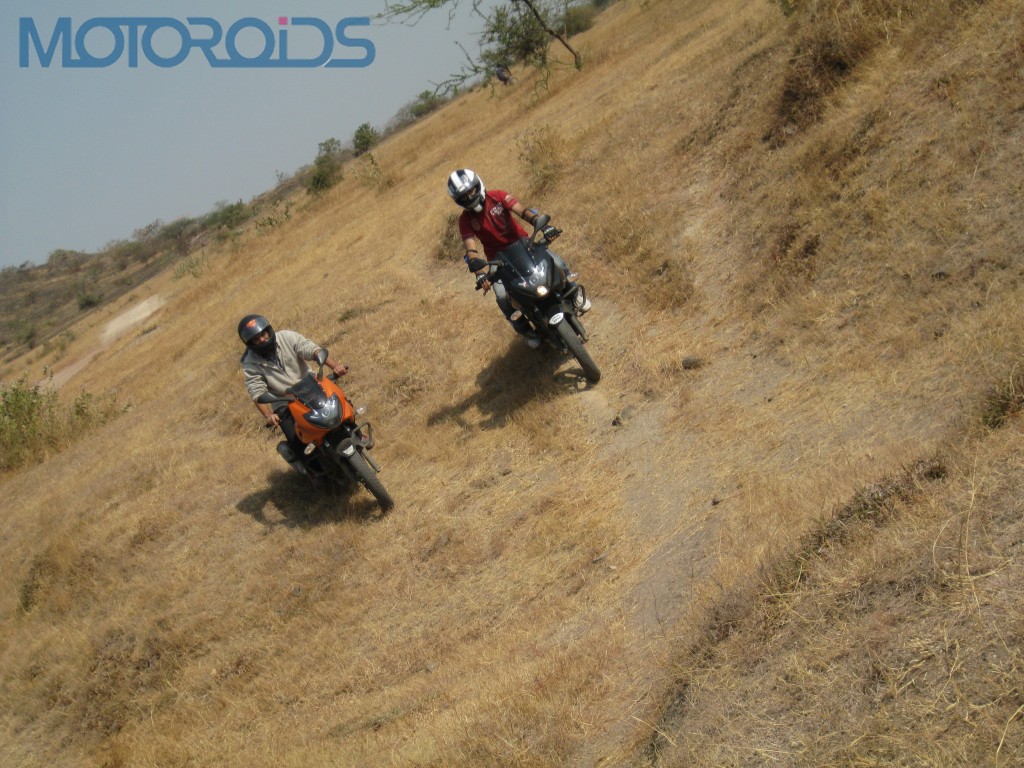 The carbed 220 came with a stiffer suspension than the 220 FI and this was something that impressed the bikers in us. While we have always maintained that the 220 DTSi feels much more confident in corners than the previous generation of Pulsars, we knew that taking this bike off road with suspension characteristics like these was asking for trouble. The bike’s suspension set up meant that every pebble on the track was felt by the rider and the effect of bumps on the spine turned out to be directly proportional to their sizes. The front suspension however was a pleasant surprise as it soaked up every landing after the jumps. After all, we have to remember that a Pulsar is known for wheelies in pulsarmania and that needs good front forks to absorb the landings.

As you might say, we here are more at fault than the poor bike but a little more suspension travel would had really helped without disturbing the on road manners much. 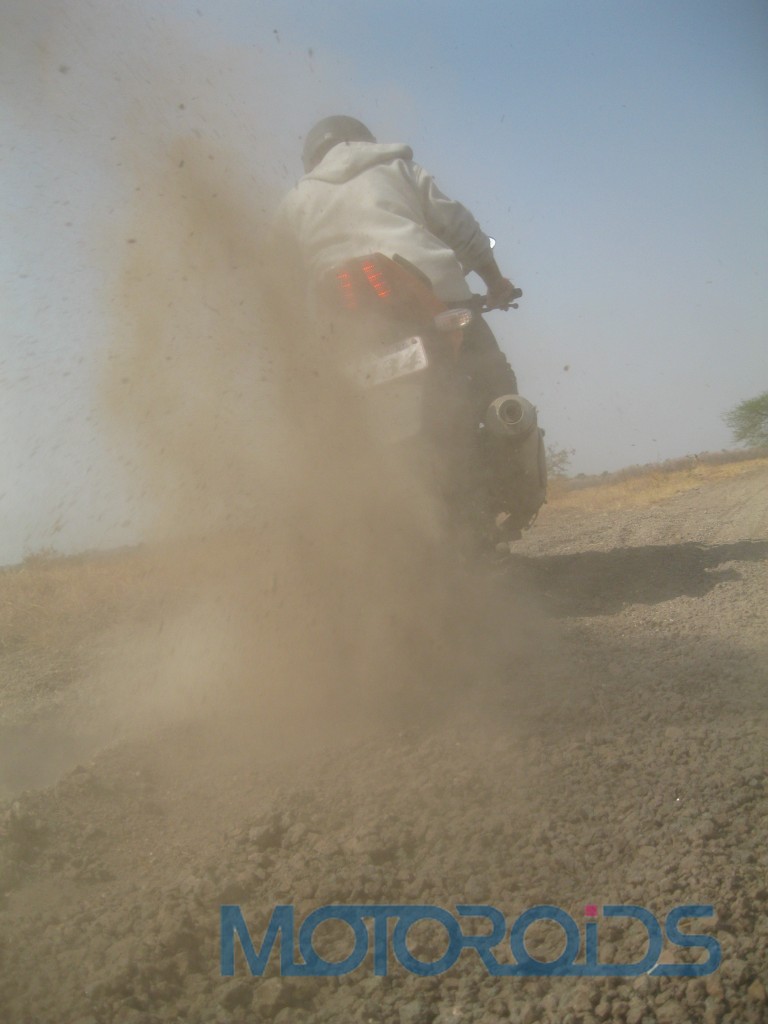 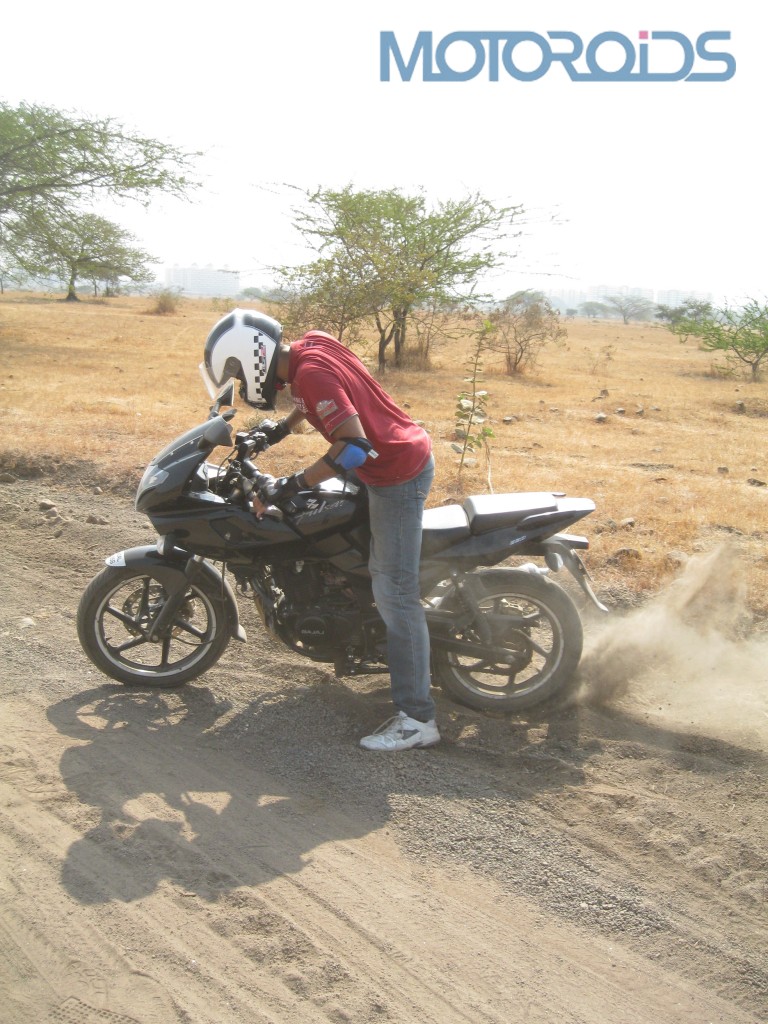 Once again, we maintain that this is not really the right bike for a test that takes it off the tarmac. The beginning of the ride test began with us pulling the throttle slowly and keeping a keen eye out for the slightest ditch or bump. As we gained confidence, the speedometer slowly started showing higher numbers but we were still focused on the road. Once we got used to the terrain, the bikes began to bring in their heavy torque and were seen spinning out dust with every little gear shift. The constant wheel spins, although scary were a lot of fun and the bumps helped us catch a little air. The disc brakes which are very good on tarmac proved to be a disadvantage on this terrain as every tiny contact with the rear brake lever send the bike’s rear sliding away. The front and rear MRF zappers did not help as the front wheel was yearning to go side ways and slide each time the bike was flicked. Finally, the tank proved to be a source of pain for the essential areas as the landings sent us sliding towards the tank. It was fun though. 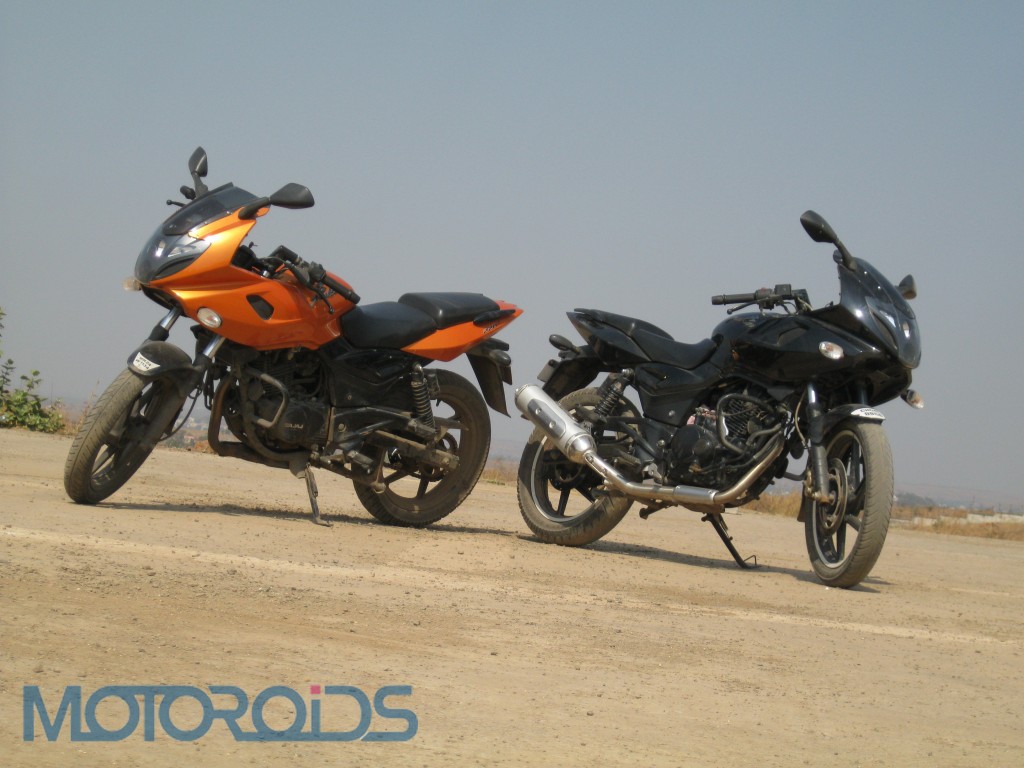 Bajaj bikes are not really known for good build quality and taking them off the road meant inviting some trouble. However, a surprise element came into picture and we are quite pleased with the way the bike held on through a couple of hours of abuse. A lot of bumps, repeated flirting with cliffs and a little fall later, all I managed was some scratches and a loose rear view mirror. The other bike pulled the entire event off without an adverse effect on the panels. We have no option but to appreciate Bajaj for managing to come up with good quality parts. Kudos to Bajaj. 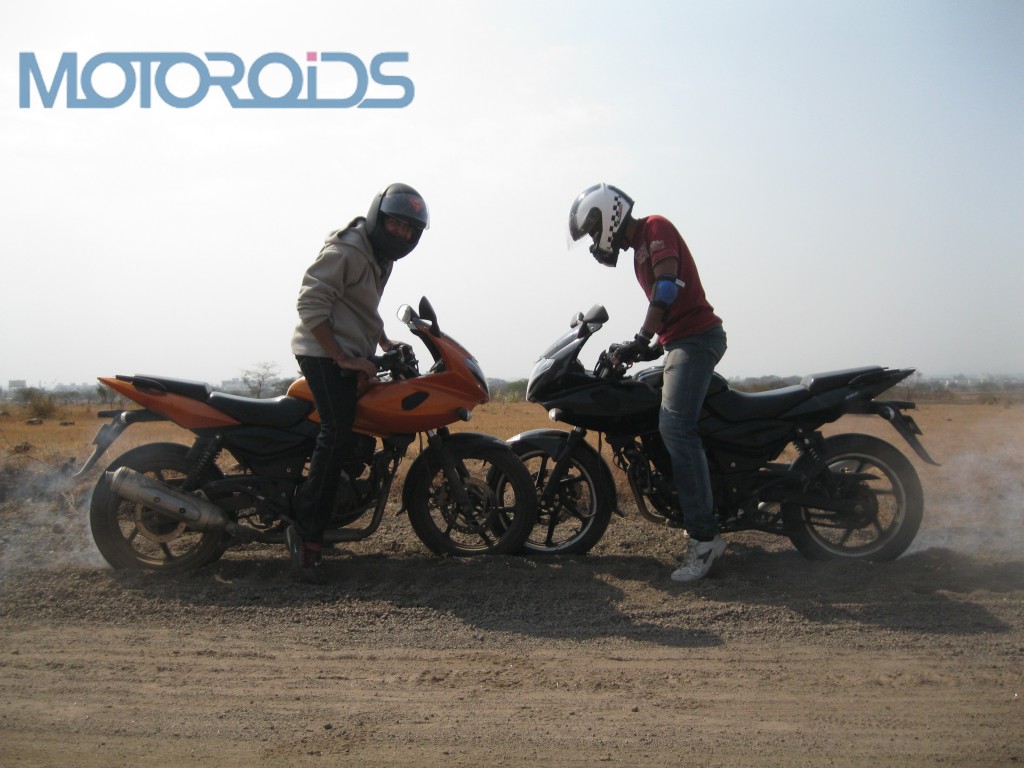 Now comes my favorite part! One area in which the 220 excels is having quite some brute force and I was sure it would help with tackling abusive dirt track. Well, it sure did and how! A considerable pulling power meant lesser downshifts and flying off the toughest of the hurdles without breaking a sweat. Making the long story short, I would say that it won’t hurt to have a Motocross style bike with 220’s  power. Did I hear you say KTM? Well, another story for another day!

Since the very beginning of this post, we have clarified that this test was far from being an evaluation of the bike. Simply speaking, this test was to show (& know) what happens when you end up at a wrong place with a wrong bike. A standard offroader should feel at home on the track we had chosen and maybe the Hero Karizma (with its CRF230F roots) would have felt better.

Pulsar 220 is no doubt a well sorted bike and continues to impress me but now that I have been there and done that, I can safely tell all our readers that an occasional off road run won’t really hurt. But is it advisable? NO. And is it fun? YES!

Stay tuned for our next test review where we tell you about the off roader that we have been talking about in this article. Below is a teaser  for the guys who are interested. 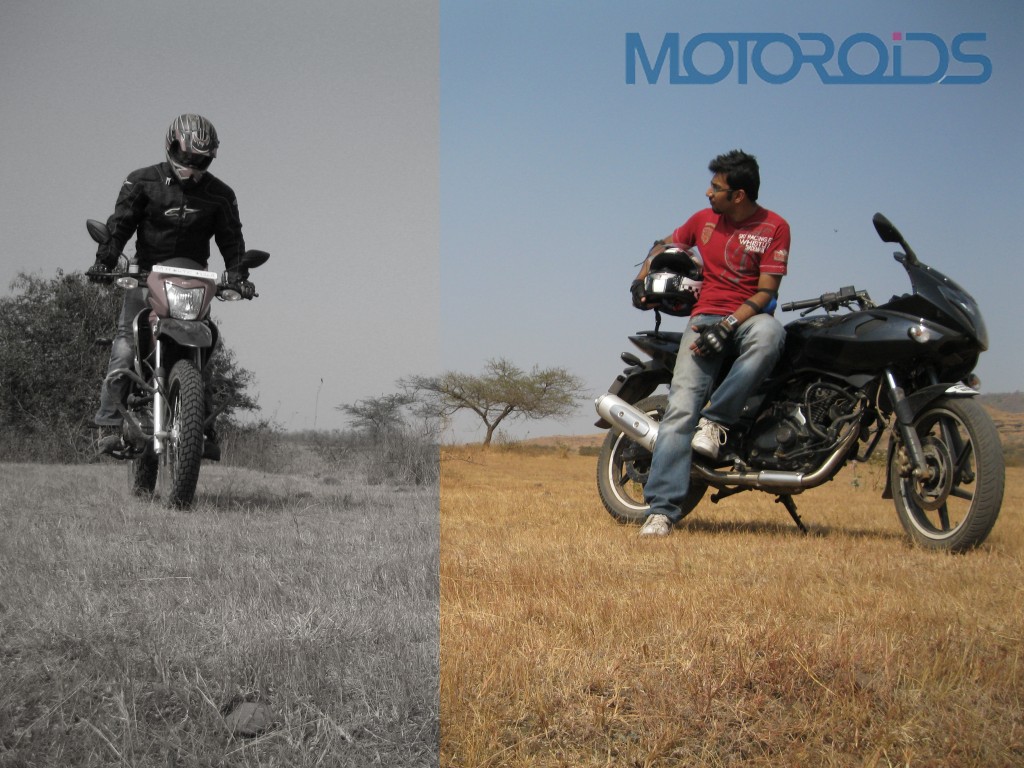