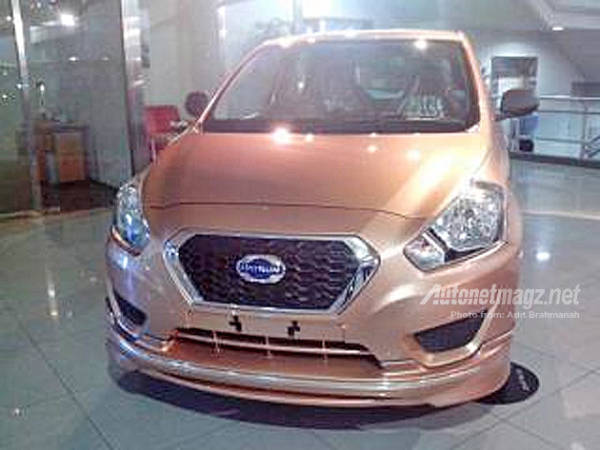 Ahead of the official launch for Indonesian car market next week, the new Datsun GO+ MPV was recently spotted in what seems to be its flagship variant. Expected to be called as Datsun GO+ Hi-Sporty, the upcoming car will sport several updates and new features over the standard variant.

The new Datsun GO+ Hi Sporty comes equipped with an aero kit, which comprises of a sportier front bumpers, side skirt, and an updated rear bumper that sports a diffuser. Other than the sporty aero kit that gels pretty well with the car’s design, this flagship variant of the upcoming model also comes with rear spoiler, side body moulding, parking sensor (as revealed by the black dots sensor on the rear bumper) and a liberal dose of chrome on the aero kit. Unfortunately though, the car doesn’t sport mag rims and boasts of steel wheels.

Mechanically, it is highly likely that the Datsun Go+ Hi Sporty would remain mechanically similar to the standard models.  Much like the Go hatchback, underpinning the Go+ MPV is the Micra platform and powering the Indonesian spec model is a 1.2-liter 3-cylinder petrol engine that has a max power of 68 hp and peak torque of 104 Nm. The engine comes mated to a five speed manual gearbox. For the India though, it is highly expected that the Go+ will be powered by the Renault sourced 1.5 litre common rail diesel engine.

The MPV measures less than four metres in length, which means it would qualify for excise duty benefits when it comes to India later this year.