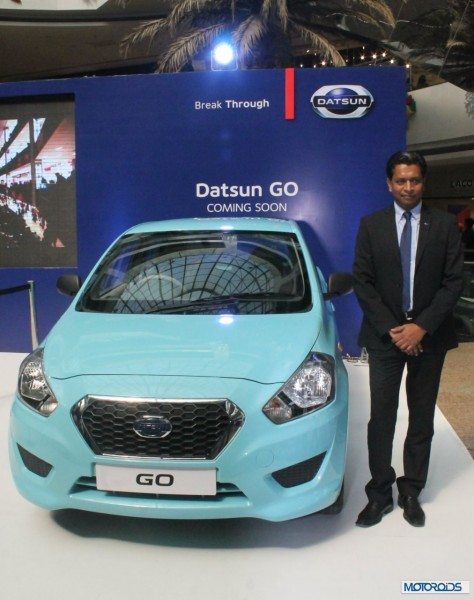 The Datsun Go road show in Mumbai, showcasing to the public the highly anticipated small hatchback from Datsun was followed by a special event meant for select media. Several media personnel, including, of course, Motoroids were invited to have a conversation with John Kullu, Datsun India’s GM Marketing. During his brief interaction with the media, Mr. Kullu threw some more light on the Datsun Go as a product, and about the sales and service strategy for the model. Here we have the excerpts from the interaction.

About the launch date of the Datsun Go

About the target cities for the Datsun Go

The new small hatchback will be sold aggressively throughout India. Datsun will target Tier 1, Tier 2 and Tier 3 cities to attain good sales volumes from a very early period.

About the expected sales volumes

No projections about the expected sales volumes can be made as of now. The target numbers about the car will be revealed along with the price announcement of the car.

About the price of spares

Datsun will make sure that the price of the spares for the Go is very competitive. In addition, the quality of the spares will be best in class.

For now the company is coming up with only a petrol engine. But engine variants can be added to the lineup at a later stage. Datsun claims that the Go will boast class leading fuel efficiency for its petrol powered version.

About the target customer

Datsun will target first time buyers, as well as young customers for the Go hatchback.