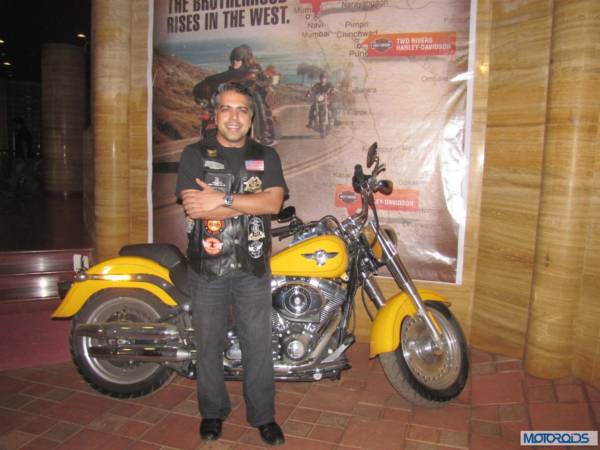 A passionate biker, a focused corporate leader and a former US Marine – Harley Davidson India MD Anoop Prakash has many dimensions to his talented personality. When it comes to corporate leaders, one hardly ever gets to meet a man more interesting than Anoop. We had the pleasure of catching up with the vibrant man a while back in Goa. Here we have the excerpts from his interaction with the successful corporate leader.

You came up with a lot of new showrooms recently, including the ones in Pune, Goa and Jaipur. How many dealerships are you planning for the next year?

With the Harley Davidson Street 750 confirmed for India launch at the Auto Expo 2014, why wasn’t the Street 500 considered from the Indian market at the outset?

What pricing can one expect for the Street 750?

As we have mentioned on several occasions, Expect the on-road pricing to be under INR 5 lacs.

What volumes are you look at for the Street 750?

We haven’t set any sales targets yet. This is a new segment offering from Harley Davidson for young customers who could buy a Harley motorcycle when they want to and not when they could afford to.

How would you wish to position the Street 750 against the existing lineups of the Superlow and the Iron 883?

The Street 750 is Harley Davidson’s entry level motorcycle for the Indian market. The Superlow and the Iron 883 would be higher up the chart.

With Triumph Motorcycles recently having unveiled their lineup of bikes, do you think that something like the Triumph Bonneville would be affecting Harley’s sales? For instance, a buyer looking for a lifestyle motorcycle at a price-point might not necessarily be choosy about a Cruiser or a Roadster.

We don’t think it would cause any dent in Harley’s sales. We rather see it as a positive sign with a manufacturer like Triumph entering the Indian market. It would only help the market grow and we see an increased demand for lifestyle motorcycles in the next few years.

Has there been any change in your strategy since the time Harley Davidson has set up camp in India?

Absolutely not. When we started our Indian operations in 2010, we had only one objective- to offer a complete Harley Davidson motorcycling experience to our customers. To make the experience more accessible, we have been opening dealerships at strategic locations housing spares, accessories and merchandise. The HOG chapter has been another initiative for our customers and annual events like India Bike Week has been an effort for non-Harley customers to experience what lifestyle motorcycling is all about. Hence overall, we have adhered to our strategy since inception and the response has been overwhelming.

What has been your growth rate in India and what targets have you set for the future?

We generally don’t reveal our targets, but since our first dealership in 2010- we have sold over 4000 motorcycles. We are surprised at the passion for Harley Davidson as a brand and the way it has been embraced in India.