It is a known fact that Chevrolet is one of the official sponsors of Manchester United football team. Now, Chevrolet’s Indian wing recently donated 150 One World Futbols to Government School in Navlakh Umbre as part of a larger Chevrolet ‘Day of Play’ global initiative that brings positive changes in nearby communities. 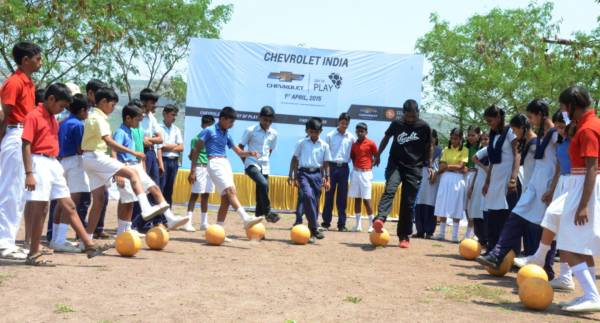 The ‘Day of Play’ aims to bring to life the concept that where there’s play, there are beautiful possibilities. The inaugural ‘Day of Play’, which kicks-off in India, will be undertaken by other Chevrolet markets globally through April 2015.

“Our focus is to help school children overcome barriers and unite through the beautiful game of football. Many of these children are growing up in less privileged circumstances where sometimes a game of football could lighten up their lives by teaching them the true meaning of team spirit and fair play,” said Arvind Saxena, President and Managing Director, General Motors India.

With the corporate social responsibility mission of “Driving a Better Tomorrow,” Chevrolet India has been working with One World Play Project since 2013, donating over 20,000 footballs to the less fortunate children across the country and bringing about positive changes to the school children in the communities around where its facilities are located.

Chevrolet India in the past donated 91 One World Futbols to Sankalp School in Gurgaon, Haryana and 70 footballs to Gunjur Government School in Bangalore, Karnataka – both schools for disadvantaged children located around GM India facilities. The remaining Chevrolet-branded One World Futbols are being delivered through One World Play Project’s NGO partners.

The donation is part of Chevrolet’s three-year partnership with One World Play Project that pledges to place 1.5 million One World Futbols with youth in war-stricken zones, refugee camps, disaster areas, and other underprivileged communities around the world. In September 2014, Chevrolet reached a global milestone with the delivery of the 1 millionth One World Futbol donated by the brand.

The ultra-durable One World Futbol represents a breakthrough in technology for a recreational, multi-sport ball.  Designed to outlast any other inflated ball available today, the One World Futbol never needs a pump and never goes flat – even when punctured, making it ideal for use in harsh environments such as disaster areas, refugee camps, conflict zones and other disadvantaged communities where a traditional inflated ball doesn’t last.

Commenting on the occasion, Stephan Sonderman, Asia Director, One World Play Project, said, “Play enables hope, opportunity and optimism in the midst of dire situations. While the ball technology is unique, the real magic is not in the ball, it is what happens when children are empowered to play.”

“The ball is a tool that unlocks the human potential. Thank you to our founding sponsor, Chevrolet. Through our collaboration, we are fulfilling our mission to maximize the power of play and transform lives,” Sonderman added.

Chevrolet is the founding sponsor of One World Play Project. Together the companies have delivered more than one million One World Futbols around the world, bringing the possibilities of play to an estimated 35 million youth in more than 75 countries worldwide, including in Africa, Asia, Europe and the Americas.