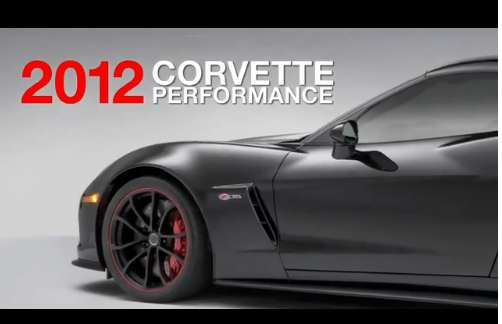 Chevrolet has made public the details of the 2012 version of its Corvette. The car will be essentially remain the same, but some modifications will be made to distinguish it from its predecessor.
The 2012 version will get a new steering wheel, and new seats. The car will also get a superior Bose music system, technology pack with GPS and brake calipers painted in sporty colours.
The faster Corvette Z06 version will get options such as a magnetic ride control, a carbon fiber bonnet, performance oriented traction management and race spec tyres.
The top of the line ZR1 also gets an array of additions such as a new performance package including a new rear spoiler, new aluminum wheels and revised transmission with taller ratios for better efficiency on the highway.

Here’s the video for the new car, followed by the press release

DETROIT – Chevrolet announced today that it will once again elevate Corvette’s performance capabilities with a series of improvements for the 2012 model year that improve on-track performance and on-road comfort. They include enhancements to the high-performance Z06 and ZR1 models as well as interior upgrades across the Corvette lineup.
Sports car fans will get their first look at the 2012 models – including the racing-inspired appearance of the Chevrolet Centennial Edition – at a special event this weekend at the National Corvette Museum in Bowling Green, Ky. Production begins in July.

“We constantly strive to make the Corvette a better car on the road and the track,” says Tadge Juechter, Corvette vehicle line director and chief engineer. “For 2012, the Corvette lineup achieves its highest performance level ever, while at the same time being easier to drive and enjoy thanks to several changes and new features inside the car.”

The Cup ZP tires were developed by the same Michelin engineers who develop tires for Corvette Racing in the American Le Mans Series and are essentially street-legal versions of a racing tire. They are included in the optional Z07 performance package on the Corvette Z06 and a new PDE performance package on the ZR1. The 285/30-19 (front) and 335/25-20 (rear) tires are matched with all-new aluminum Cup-style wheels in satin black or machined finishes. They are about five pounds lighter (2.2 kg) and stronger than the 20-spoke wheel offered in 2011.

Performance Traction Management (offered on the Z06 for the first time in 2012) is an advanced system that optimizes traction for greater and more consistent on-track performance. The system also integrates traction control, active handling and selective ride control systems to enhance race track driving consistency and overall performance. When full throttle is applied upon exiting a corner, it automatically manages acceleration dynamics.

A full-width racing-style spoiler for improved aerodynamics is also included in both the ’12 Z07 and PDE packages. The Z06 model will now offer Magnetic Selective Ride Control, the world’s fastest-reacting suspension technology – an innovation Corvette pioneered several years ago. And as before, Brembo carbon ceramic brakes will be a part of the Z07 chassis package (they are standard on ZR1). Michelin Pilot Sport 2 tires remain standard on the ZR1.

A carbon fiber hood will be an available option on 2012 Z06 models, while the standard manual transmission for ZR1 will include taller gearing in fifth and sixth gears, for a 2-mpg improvement in highway fuel economy.
Interior and feature changes

All 2012 Corvette models will include a new seat design and a new steering wheel. The seats feature larger bolsters on the seat back and cushion areas, which provide better driver support, especially in high-performance driving while remaining comfortable for daily street driving. Microfiber suede seat inserts are optional and improve tactile feel, as well as add additional support.

The new seats are complemented by the revised steering wheel, featuring model-specific badges, streamlined switch trim and wrapped spokes. Padded center console and armrests for all models are now included for 2012. An additional visual touch inside the car is contrasting color stitching – in red, blue and yellow – which is available with the custom leather-wrapped interior.

Also coming in 2012 is a new Bose uplevel audio system, which includes nine speakers (compared to seven in 2011) for improved audio quality that is more precisely tuned to the cabin’s acoustics. New tweeters located in the instrument panel and improved Bose Nd next-generation bass performance is the main benefit that Corvette drivers will hear.

Wrapping up the new features for 2012 is the availability for customers to select brake caliper colors, for more personalization of their Corvette. The calipers are offered in the red, yellow, silver or gray.