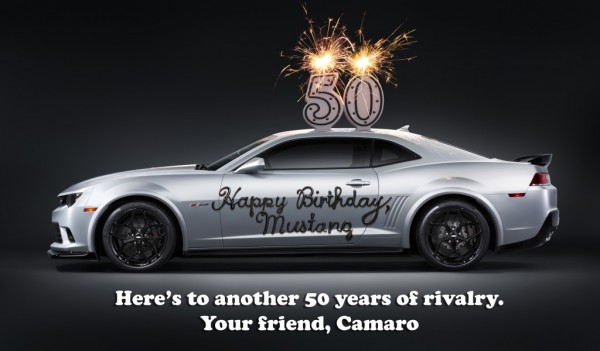 Chevrolet Camaro and Ford Mustang are involved in easily among the most deep rooted rivalries in the world of cars ever. Less than a week ago, the Mustang celebrated its 50th anniversary and on this occasion, even GM has been a good sport by coming up with an official image that makes this little birthday card.

Chevrolet believes that the Camarao-Mustang rivalry is much like some other longtime product rivalries like Coke vs. Pepsi, Leno vs. Letterman and Nike vs. Reebok.

Only recently, Ford came up with the all new Mustang 50 Year Limited Edition model that made its debut at the 2014 New York Auto Show. For the 50 year celebrations, Ford is revisiting its 1964 publicity stunt at the Empire State Building. The current gen Camaro too recently revisited its familiar themes, like the ZL1 and SS, which were recently included into the lineup.