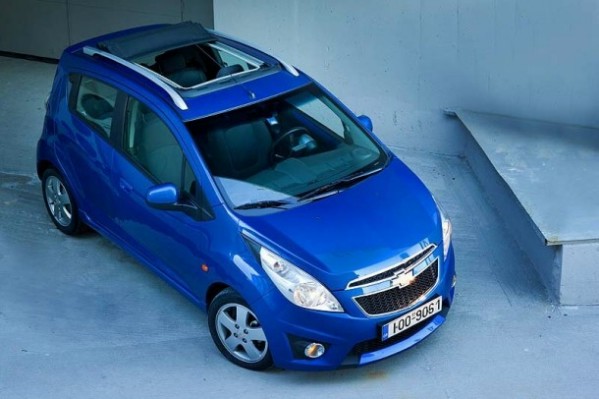 It’s a race out there, to create the nuttiest, and sometimes the most pointless body type for an automobile to get some attention. Topless SUVs, four door coupes, off roading sports cars – you imagine a body type and chances are that some designer in Europe has already given shape to it. No so extreme, but amusingly nutty is this soft top version of the Beat. This Beat (or Spark for Europe) hasn’t lost its top entirely, but has a huge aperture in its roof cut out and replaced by a motorized rag. It’s essentially a sunroof, but with the glass replaced by a cloth.

A different concept for sure, but what’s the point we ask. The folding top would hardly be visible to the onlookers unless you have a neck craning out. Even if you have one, it would be difficult to make out whether it’s cloth or glass. A glass roof makes more sense according to us, which even when engaged enhances the feeling of space and light within the cabin. Such, however, wouldn’t be the case with the folding rag. Cloth may cost less, but with all those motors and other jazz in place, we wonder how much difference it would make.

The funky theme goes inside this beat;s cabin too, with the instrumentation having been altered to look sportier. All that jazz is designed to make you poorer by about 1200 Euros, which is more than 80 grand in Indian rupees. So would you want to have such a soft top cavity in your Beat? More specifically, does a ragtop sunroof appear to be more appealing to you than a glass roof? Do let us know