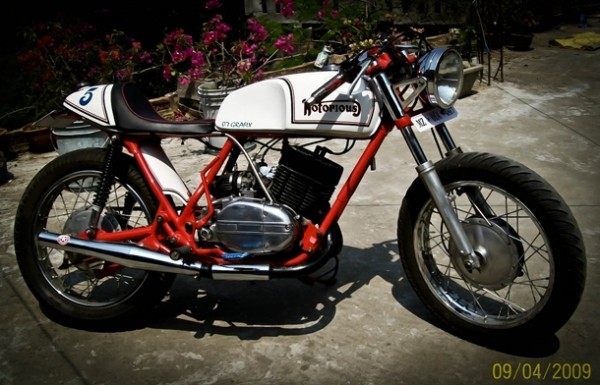 Regulars at Motoroids would know that we’ve always been fascinated by custom motorcycles and cars. These motorcycles, tailor made by an individual, not just stand out in a crowd of factory-spec models, but very often, also serve as an extension of its creator’s personality. One such creation is this Cafe Racer styled bike you seen in these images. And no, unlike what you might have thought before having a good look at these images, this Cafe Racer is not based on a Royal Enfield. Rather, it is based on the Yamaha RD350, which is regarded as a cult classic by the biking fraternity. This modified Yamaha RD350 Cafe Racer, which has been named as the Notorious, is by a biker named Hima, who also has a modified Electra.

Hima has shared his building experience with us all. Here’s what he has to say-

“I christened her “Notorious”, I found this 80′s RD350 lying in a small garage..I has always wanted to own an RD. Growing up in the 90s it was my DREAM BIKE back in the day. So, I used whatever savings I had and bought her. This was in 2007. In the beginning, she gave me lots of problems, the connecting rod had to be changed, even before modification work got started! Then the gear lever slipped, you name it…yeah she was difficult in the begining. Then in Dec of 2007, we started working on her, with my friend Ms-a, the same guy who worked on my Electra. The fuel tank is the original tank, cut up, dented etc to have a retro cafe racer look. The chasis was altered a little. The seat was custom made (it was not very comfy, mind you). The head light is a Thunderbird headlight, so too the head light clamp. The fork was dropped to the lowest possible extend. The handlebar was that of a standard bullet 350, but later I used an FZ handlebar. Both the wheel rims are 18 inches. Both the tyres are MRF zappers, the front is 100/90/18 while the rear is 120/80/18.

What made ‘Notorious’ unique was the oil tank. The tail had two compartments, the front housed a dry cell battery, while the back was used as an oil tank. Oil was piped down from this tank to the engine. It was pretty tough to get the right shape for the tail (oil tank). We had to cut a bullet fuel tank to make the tail…after a lot of weldings and denting, it came out right. The tank cap is taken from the fuel tank of an old generator.  In the early 2008, I had to go down to Guwahati, so I took the engine covers and got them buffed clean and shiny there. The number 5 stands for my Birthday. I used two colors red and white because I think they are the two colors which are quite in contrast but at the same time blend quite well. The exhausts are both Bullet exhausts which I bought in Guwahati, the dukan-walla called them rockets? 🙂 Well, yes this baby ‘Notorious’ sounded like a rocket, announcing her arrival a few minutes before she shows herself, thanks to the rocket silencers.”

Now comes the sad part. Towards the end of last year, owing to a financial crunch, Hima had to sell off his modified Yamaha RD350 Cafe Racer. “In 2010 I was badly in need of money, so I had to sell her off. It was a very difficult decision to make. I dont even wanna go into details. Well, thats about “Notorious” I used to ride. “

While we are sad about him having to part with his motorcycle, we have nothing but truck loads of appreciation for his efforts. We are sure that he and his bike will act as a source of inspiration for many of us. What do you have to say about this motorcycle?