A Range Rover owner from Dubai decided to make his luxurious SUV go topless.  The car was spotted cruising with the soft top down on the streets of Dubai. Although the car looks a bit weird, we cannot expect anything more from this modification crazy region. 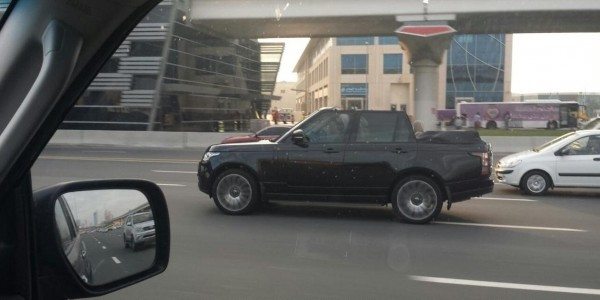 Earlier this year in July,  Newport Convertible Engineering (NCE) had showcased a convertible conversion for Range Rover. But this owner from Dubai went overboard and decided to spend a considerable amount of money to someone willing to cut off the SUV’s roof.

It is not known if the car seen here has been done by the boffins at NCE. In this car, the roof can be concealed
by a cover when it’s lowered.

In other news, the Range Rover Convertible by NCE has gone into limited production in August and is available at select Range Rover dealerships.

Do you think the Land Rover Range Rover Evoque Cabrio will be a hit ? With the company launching the Evoque 9 speed in India next year, would you like to see the Evoque cabrio on the Indian streets ? Do let us know your thoughts in the comments section below.