Home News Chance of Petrol prices to be hiked by Rs 0.65/litre 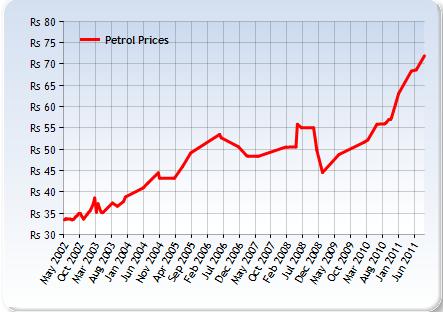 We could manage to find a graph (from squamble.com) showing the increase in petrol prices at Mumbai since 2002 till mid of 2011. Expect the graph to head even further north. If the state-owned oil firms manage to get the required political approvals, Petrol prices may see an increase by Rs 0.65 per litre this week. One of the main factors responsible for the increase is the fall in the rupee to an all-time low of Rs 53.75 per US dollar and this has resulted in an increase in oil import costs. Another reason is the increase in international rates of gasoline. It may be noted that the domestic petrol prices are benchmarked against international rates and this has resulted in the need to hike gasoline rates in country.”The under-recovery on petrol is Rs 0.55-0.56 per litre. After adding local sales tax, the desired increase in Delhi comes to Rs 0.65-0.66 a litre,”  a source in a top state run oil firm said. He also said that the oil companies will review prices tomorrow and any change will be effective from December 16.The source, however, could not tell if oil companies will definitely go ahead with increasing prices tomorrow, in line with the change of rates every fortnight. “The actual loss to us is only 50-55 paise. We can tolerate it for another fortnight if need be,” he said. We recently saw a decrease in petrol prices on two occasions. State-owned oil firms had reduced petrol prices by Rs 2.22 per litre from November 16 and this was followed by a cut of Rs 0.78 per litre from December 1.This was a result of internation petrol prices witnessing a decrease. Oil firms are expected to seek approval from oil ministries befora taking a decision on increasing the prices. It may be noted that the Parliament is in session and an a decision to increase in petrol prices will probably lead to protests by Opposition.