Home News Car Batteries 101: How They Work, Their Types, and Tips on How to Keep Them in Good Shape

The invisible forces of electricity run through many things to keep them ticking. Automobiles are no different. Inside a car, a complex web spun out of thousands of cables requires current to flow through it, so that some of the most vital components of a motor car can function as required.

In modern cars, every time you twist the key to the ‘Accessory’ position, a power-up cycle sends current from the battery to the ignition system and the fuel pump. Since the alternator is yet to kick in, the battery is the lone power source for everything that must function at this stage, before it can also do the job of powering up the starter motor to crank the engine. For being the match which ignites the flame, it is essential that you know what are the different types of batteries available, which one is the right one for your car, and how do you go about ensuring its good health. Let’s look at the types first.

The rectangular box which sits under the hood of your car in a corner, stores energy in a chemical form that can be released on demand as electricity. The vast majority of car batteries are some form of lead-acid batteries. They can either be ‘Flooded’ or the ‘Dry’ type, where the latter is also known as “AGM” or Absorbed Glass Mat battery. 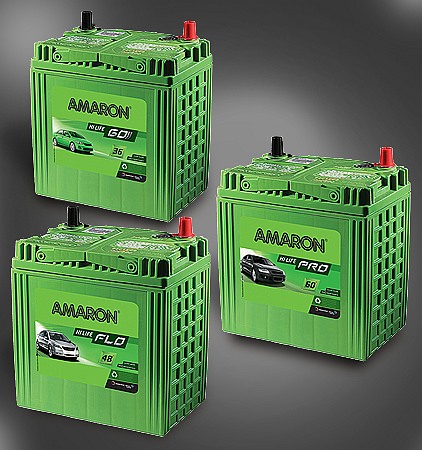 Like a ‘Flooded’ battery, a ‘Dry’ type is also a typical lead-acid battery where plates of lead and lead dioxide are dipped inside an electrolyte within a polypropylene case. But in an AGM battery, the electrolyte is absorbed in a glass mat separator, which allows them to be mounted in a variety of positions. On the other hand, a ‘Flooded’ battery might leak or spill electrolyte, if it isn’t kept upright. Specialists like Amaron make use of a patented SilvenX alloy within their maintenance-free AGM batteries, which makes them last longer than others.

A few cars can have some variation of a lithium battery under the hood, but such examples are rare for the fact that Li-ion technology is expensive. The batteries used in cars which are powered by an internal combustion engine are different than those which are used for application in Hybrid or Electric cars. Hybrid automobiles generally have a nickel-metal hydride battery pack which powers the electric motors which are a part of the drivetrain. The lead-acid batteries found in most cars are only used to power the electrical system and to start the engines.

The Right Battery for Your Car

Most modern cars these days come fitted with a Dry, maintenance-free battery which doesn’t require top-up of fluids like in the good-old-days. However, car batteries can only last for a specific time, post which, they require replacement. To check the health of your car’s battery, a fully-charged battery must measure at 12.6 Volts or above on a multimeter. When the engine is running, this measurement should be between 13.7 to 14.7 Volts. 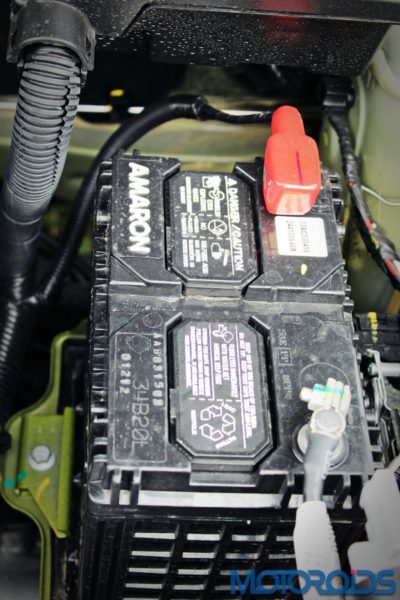 While the above is generally a common factor, some parameters for a battery could differ according to different makes and models. For example, the CA (Cranking Amps) and CCA (Cold Cranking Amps) rating could differ from battery to battery. These are nothing but the ratings which define the battery’s ability to start the engine in moderate and low-temperature conditions, respectively. CA rating is the number of amps a new, fully charged battery can deliver at 0° Celsius for 30 seconds, while maintaining a voltage of at least 7.2 volts, for a 12-volt battery.

On the other hand, a CCA rating is the number of amps, a new, fully charged battery can deliver at -17.8 degrees for 30 seconds, while maintaining a voltage of at least 7.2 volts, for a 12-volt battery. The higher the CA and CCA rating, the greater the starting power of the battery. There’s also an RC (Reserve Capacity) rating which defines the number of minutes a new, fully-charged battery at 27° C can be discharged at 25 amps and maintain a voltage equal to or higher than 10.5 volts for a 12-volt battery. This rating represents the time the battery will continue to operate essential accessories in the event of a charging system failure.

But once it has been verified that your car’s battery needs a replacement, simply follow instructions in the manual to ascertain the appropriate size and power required for your car’s needs. Automotive batteries are backed by a warranty package. Currently, Amaron offers the most long lasting battery performance, which is backed by warranties which range from 36, 48 and up to 60 months! 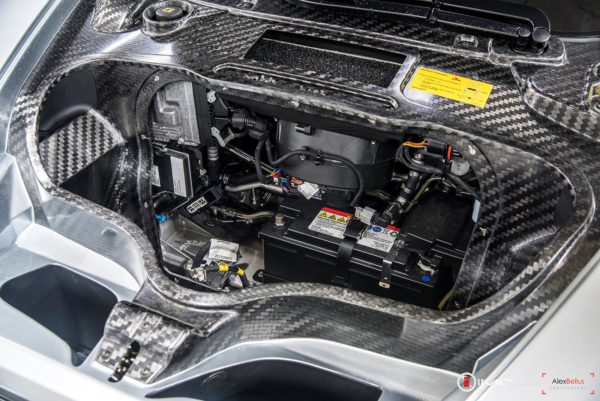 # Avoid operation of things like the headlights, audio system and other electricals when the engine isn’t running.

# If you have added any accessories which require additional power, the car’s battery will be sapped of its power in no time if you operate it with the engine switched off. Also, ensure that installation of all such things is done professionally so that it doesn’t cause the electrical system to malfunction or add unnecessary load on the battery.

# Keep the terminals of the battery clean as dust accumulation can cause vent plug blockage. Apply petroleum jelly to cable clamps and terminals for proper lubrication. Never apply grease

# Make sure that the battery is firmly secured to the cradle and the cable clamps and lead wire contact is proper.

# If your car has been fitted with a ‘Flooded’ type battery, top up only with distilled water and maintain its level only till the indicated line. Do not use acid.

# Before replacing the battery or if your car faces electrical issues, inspect the electrical system, especially the regulator voltage setting.

# Avoid hot situations as much as you can. It will deteriorate a battery’s life quicker by evaporating the water from the electrolyte and corroding and weakening the positive grids.

# While disconnecting a battery, always check the type of grounding system the vehicle has. It is extremely important to remove the ground source first. If you remove the positive connector first in a negative ground system, you risk the chance of creating a spark. The result will be similar if the metal tool you’re using to remove the positive terminal connector comes in contact with any piece of metal on the car.

# For the chemicals inside them, Automotive batteries need to be disposed off with care as they could harm the environment and become a health hazard. When replacing a battery, hand over the old unit to the retailer who will help you recycle it. You may also contact Amaron’s AMCARE who will arrange for the battery to be picked up and disposed of safely after the Lead inside has been recycled.