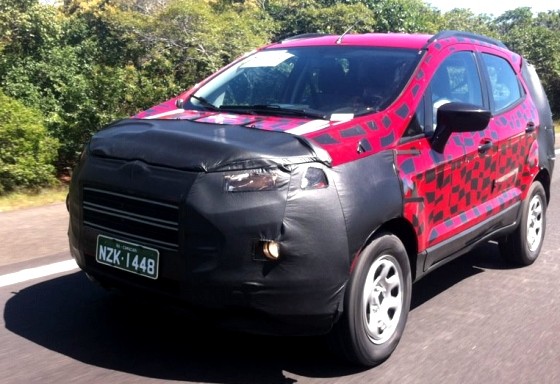 Sighting of Ford Ecosport on test duty are getting more and more common now. Recently, a Brazilian website caught the next car from Ford being tested near Camaçari, Bahia. It has been reported that there was an entire convoy of Ecosports traveling at high speeds.  It may be noted that these cars were camouflaged and that surprises us as the ‘close to production’ model was unveiled in India prior to the Auto Expo. However, the camouflage makes us feel that the production car might have substantial changes over the version we saw at the unveiling. As we had earlier reported, the new Ford will come with a 1.0-liter Ecoboost petrol engine. We still wait to get a glimpse of the interiors of this car.