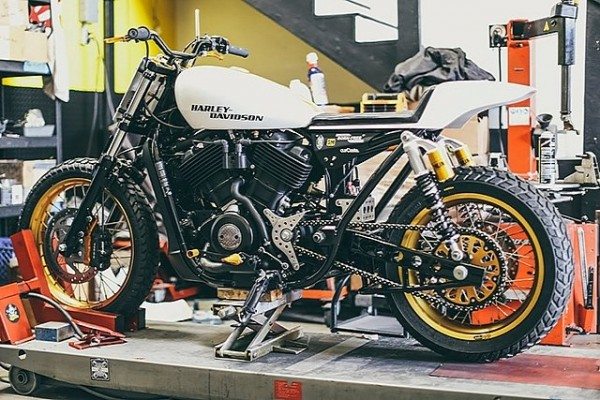 It’s just been a handful of weeks since Harley Davidson rolled out the bike that marks a new era for the American motorcycle manufacturer- the downsized Street 500 and 750 models built specifically for developing markets and so called “urban riders”. The bikes are due in India soon, and to be manufactured at H-D’s new plant in Bawal, Haryana.

And we’re already here with what seems like the first documented build of the Street 500. California based custom motorcycle outfit, The Speed Merchants– specializing mostly in Triumph and Harley Davidson builds, have customized a Street 500 with a flat-tracker theme. Boss Brandon Holstein says that it pays a tribute to Harley-Davidson’s racing heritage.

The bike was completely stripped for adhering to the chosen theme, which demands a lightweight package. The forks, wheels, fenders, batter, sub frame and controls, along with the stock exhaust system had to removed, shedding an impressive 22Kgs all around.

New, adjustable forks with top-end preload adjusters from Huntington Beach H-D went in. The original wheels got a wire spoke job done, with an extra bracket on to accommodate the new, Tokico brake caliper- with a matching red one for the rear as well.

The sub frame was completely redesigned, resulting in a lot of newfound under seat space, which was crammed with the wiring and a new lightweight Antigravity battery nestled inside a custom battery holder. Taller, piggyback rear shocks from Ohlins went on to replace the stock rear springs.

The new stance of the Street 500 was achieved using a new, custom built aluminum rear fender and a raised front fuel tank. The minimalist seat got a Bates Leather tuck-and-roll cushion. The entire headlamp cluster was given a miss and replaced by a square plate donning the Speed Merchants logo with an off center projector headlamp-a radical touch.

More importantly, the Street 500 was also converted to chain final drive, with an EK chain and a Super Sprox rear sprocket. Switchgear has been sourced off some Suzukis- the GSX-R600 and a GSX-R750, complemented by Pazzo levers, all mounted on in-house bars. The updated exhaust system includes a Cone Engineering 2”core muffler, along with custom headers which were fabricated in-house. The Revolution X V-Twin was untouched.

For more images of this Street 500, check out the gallery below