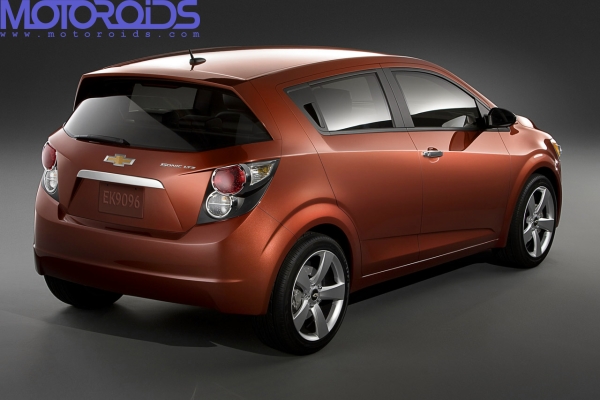 The 2012 Chevrolet Aveo which was revealed at the Paris Motor Show will be officially called the Sonic. The rebranding move for Chevy’s entry level hatch and sedan was announced by GM USA. While it’s confirmed that the new car will be called the Sonic in the US, Canada and Mexico we think it would be apt for GM to rebrand the car for the Indian market as well to give it a fresh appeal. The Aveo hatch and sedan are not doing very well in India, and a new badge may just create the interest in this new small car from GM stable.
Chris Perry, GM’s vice president for Chevrolet U.S. in a statement explaining the rebadging exercise said “The Sonic represents a new beginning for Chevrolet in the small car segment and so we felt it was time to give it a new name. The new car is roomy, stylish and fun to drive, and Sonic is a youthful, energetic name that helps convey what this vehicle is about.”
Engine details on the new car are sketchy, but the hatch will surely have the 1.2 litre petrol engine of the Beat. Sedan may have the current 1.4 and 1.6 petrol options, along with a diesel unit which will be common for both the hatch and the sedan. Expect an India launch by early-mid 2011.