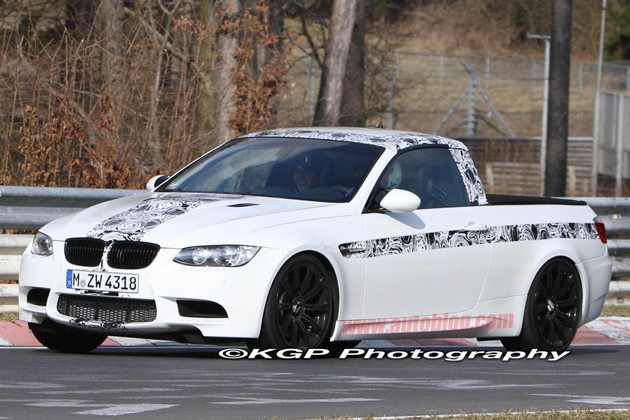 How would you react if you caught a BMW pick-up truck testing? Sure, Porsche has done such a sin with the Cayenne in the past, but we wouldn’t really want another pure breed brand to get corrupted would we? That would be like a neurosurgeon welding iron pipes to make low-quality beds, we reckon.

So when a bunch of professional spy photographers clicked the images of this burly looking machine, which would handle as well around a racetrack as a cobbler would stitch a wound, they experienced palpitations with the very thoughts of BMW making a vehicle so contrasting to its image. Apparently, some of the motoring journos, scared to the bone with the ghastly idea of an M3 pick-up immediately called the BMW top management. The company’s Munich head of product communications, Dirk Arnold gave them a good reason to heave a big sigh of relief when he said, “Ah, yes, everyone’s been talking about that pickup. But, no, this is… how you call it, an April Fool’s Joke”. He further laid emphasis on the fact that there is no chance that “BMW will ever during our lives produce such a vehicle, in any segment.”

BMW is planning a a press conference neat Munich to exhibit the new M5. The event will also witness the current and the future M3, AND, this very truck that you see in these pictures as an April Fool’s joke.