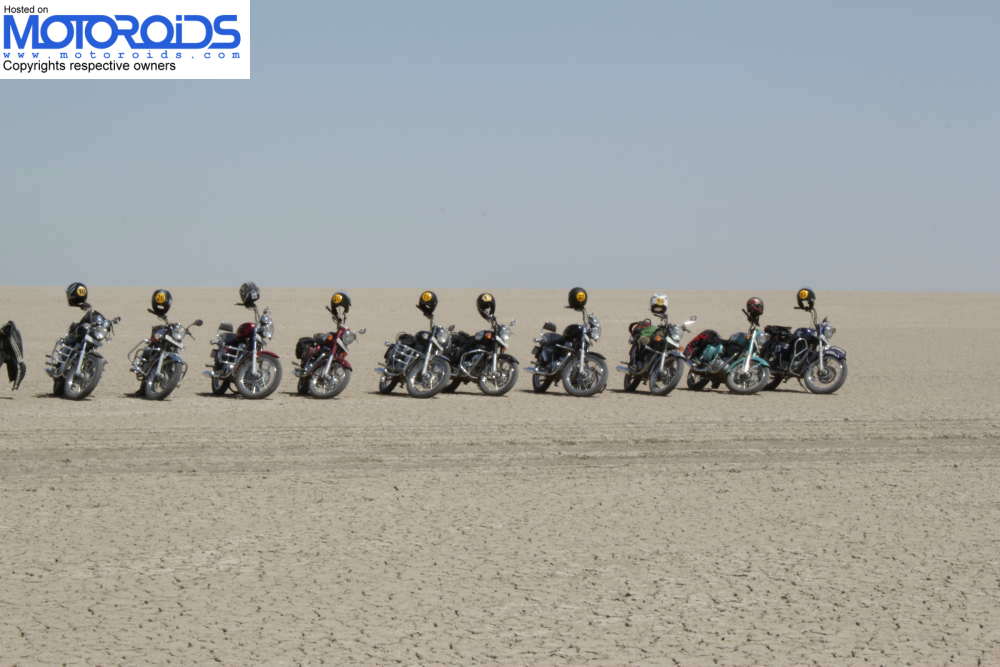 Chennai based Royal Enfield recently organized the Tour of Rann of Kutch as a part of its annual calendar of group adventure tours for its fans. Here’s log of the ride, along with some stunning pictures

12th March 2011 – Ahemedabad – The riders started pouring in one by one as the bike /riding gear scrutiny started, and briefing happened. The riders got to know each other and exchanged points and expectations from the ride.

13th March 2011 – the twenty six riders took off on their epic journey after they were flagged off by Mr. Amitabh Pathak, Commissioner of Police, Ahmedabad, from Acropolis Mall, S.G. Highway Ahemedabad.  A large crowd had gathered to cheer the riders as they embarked on this adventure. Ahemedabad is reckoned as the cultural capital of Gujarat and sets an example to many other cities and towns this side of the country, thus making it the obvious choice for the flag off. With this event the culturally rich city known for the art and craft and culinary delights woke up to its adventurous side.  The riders were given an escort by the police vehicles till the outskirts of Ahemedabad and it definitely was an impressive sight for the people around. After the first regroup they headed towards Zainabad and reached later in the afternoon. After a short nap the riders rode through a sandy track, which also gave some much needed practice to novice riders; to a nearby lake to watch the migratory birds, .

Caught in a traffic jam of a different kind

14th March – the group rode out from Zainabad and hit the little Rann of Kutch. After entering the vast desolate landscape the riders couldn’t hold themselves back and enjoyed it to its fullest extent running wide in the vastness. The terrain was also quite harsh as was evident by the 4 – 5 punctures they suffered by the end of the day but it was all worth the experience. The day ended at Dholavira where the team rested for the day and could see the great vast white rann right in front of their eyes. They prepared themselves for tackling the great white rann the next day.

15th March – the day the Riders ventured into the great white Rann. Riding over sandy and rocky trails the riders went through the two border outposts at Machhi and Karni which are areas quite secluded from regular civilization. Reaching the Greater Rann, the riders were in for a shock as they realized that the Greater Rann was still wet and flooded. The BSF commandant confirmed that late rains in February and a broken dam on the other side of the border was the cause of it. However the ride through the trails to Karni and Mucchi was any off roaders dream and more than made up for the disappointment. In the evening they visited the 4000 year old Harappan civilization near Dholavira before calling it a day.

16th March – a long day and the riders covered approximately 300+ kms out from Dholavira to Hodka. They stopped at the Bhuj dealership where a traditional gala welcome was organized by the local team. The day ended at the serene Shaam E Sarhad resort at Hodka, after a night ride out into the White Desert which fortunately was dry.

17th March – the riders heading all the way to the India Bridge and then further on to the BSF operated old sardar post. Located right on the border the Old Sardar post is the site where a memorable battle was fought by the CRPF in 1965. To reach the post the bikers had to go ride on surface which was more of an off-road trail than tarmac roads. The temperature in the Rann at this time of year had started to rise already and as per the riders it was very hot. Riding 300 kms on this day was definitely exhausting but the adventure made it seem exhilarating and a test of endurance. On the return the riders rode up to Kala dungar to have a magnificent view of the sunset over the rann. They spotted some wild jackals on the horizon as the wildlife of the rann started getting alive with the fading twilight. After the sunset they headed straight to the resort.

18th March – the penultimate day of the tour and perhaps ended up being the longest day of the whole journey. The riders on their Royal Enfield motorcycles left from Hodka and since they did not get the necessary permissions to cross the little Rann again they had to take the highway all the way back to Zainabad. The weather was hot and the strong crosswinds on the long 400 kms marked the end of one of the most awesome adventures for the year. After a small party for all the riders where they shared stories of the individual adventures they had during the ride and how they bonded over the motorcycles they called it a day.

19th March – the day started off with the riders slowly getting to realise that this was perhaps the last day of their adventure. No one really wanted to head back to civilization but then they shook off the after-effects of the night’s party and geared up for the last 120 odd kilometre ride back from Zainabad to Ahemedabad. The sleepy town of Ahemedabad was woken up to the sound of over 2 dozen thumping royal enfield machines as the riders rode into the city and headed straight to their finish point. Getting off the bike they were exhilarated and recollected each and every moment of their adventurous ride as they dusted their jackets and finally gave their bikes some rest.