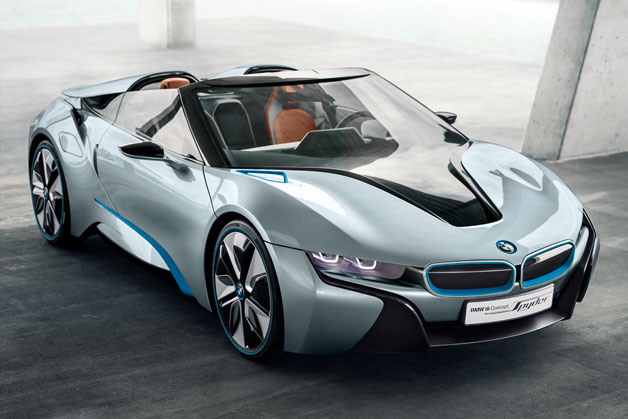 I have to admit it. I have been in love with concept cars from BMW ever since the GINA came out some gazillion years back. Now, going further with its ‘i series’ of concept cars, BMW has revealed that it will go ahead with developing a production version of the top less i8 concept car. The production variant is to be released some time in 2015.

The i8 Spyder will be an electric-petrol hybrid. The current concept is the third pre-production version of the upcoming supercar. The concept will make its public debut at the fast approaching Beiging motor show.

The Spyder is developed around a carbonfibre-reinforced plastic structure. The body panels too are made out of same exotic stuff. The i8 Spyder is 4480mm in length, 1922mm in breadth and 1208mm in height.

Unlike what was seen on the earlier i8, the Spyder does away with the 2+2 layout and is instead a two-seater. The bulkhead at the rear has been moved forward to free out more space for the engine. The new version has a 2650mm wheelbase.

The Plug-in hybrid has been borrowed from the earlier i8 coupé. The system sees a 1.5-litre three-cylinder turbo petrol motor mated to an electric motor. The 3 cyl engine is mounted at mid/rear and delivers a serious power output of about 220bhp. The electric motor on the other hand, develops some 129 horses and power is transmitted to front wheels thru a fixed-ratio gearbox.

BMW says that computer simulations show that the i8 Spyder is capable of doing a 0-100kph run in 5.0sec.The top whack is limited at 250kph.

The lithium ion battery sits within the centre tunnel while the petrol tank finds itself behind the rear bulkhead. BMW claims that the i8 Spyder has got a 50:50 weight distribution. It is being said that the car will also sport a system similar to the Kinetic Energy Recover System (KERS) seen in modern F1 cars.