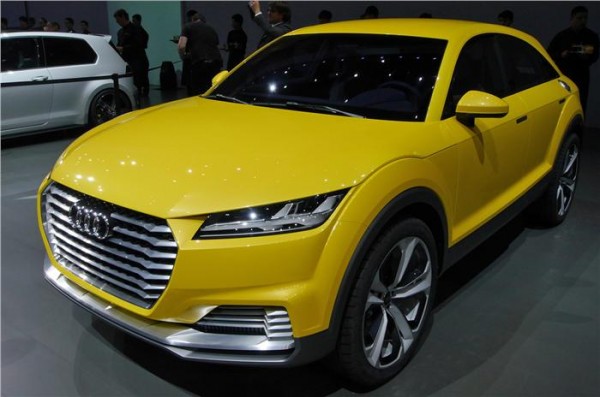 “The Audi TT offroad concept provides a glimpse of how we might imagine a new model in the future TT family,” said Audi technical chief Ulrich Hackenberg. “It will be the peak sporting SUV in its class. We chose to present the Audi TT offroad concept in China, our second domestic market, because it represents the urban mobility of tomorrow: It is sustainable, dynamic, intelligent and connected“.

The production spec TT offroad model could go on sale in a couple of years of time. However, Hackenberg has said that his company would take around six months to decided whether or not to push this car into production stage.

Basically, the latest Audi concept is a four door compact SUV that is powered by a plug-in hybrid. It is highly likely that on entering production stage, the new model will rival the likes of Range Rover Evoque, Porsche Macan and BMW X4. The car boasts of a front mounted 2.0 litre TFSI turbocharged petrol engine that has a max power of 288bhp and peak torque of 280lb ft. All the power is sent to the front wheels via a six-speed dual-clutch transmission that boasts of an integrated 40kw electric motor. Back on the rear axle is mounted a second electric motor that has a power output of 85kW.

Combined power output of this hybrid system is rated at 402bhp and this enables the car to accelerate from zero to 62kph in 5.2 secs. The car has an electronically limited top speed of 250 kmph. The new Audi TT offroad concept is underpinned by the Volkswagen Audi Group’s highly publicized MQB platform.